Learn why early-age cracking occurs and how to prevent it. 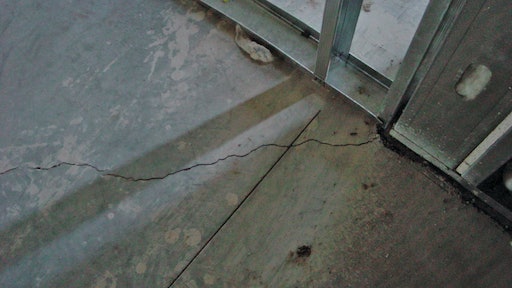 New slabs-on-ground crack when tensile stresses from restrained shrinkage exceed the concrete's strength. This type of early-age cracking occurs during the first few days of the slab's life and is caused by early concrete volume changes related to dry shrinkage and thermal contraction. Sawcut contraction joints are the most common method of controlling early-age cracking — when properly installed, cracking should occur in the joints.

Sawcut contraction joints do not prevent cracking but control the location of the cracking. To ensure cracking occurs in the sawcut contraction joints, joints must be installed before shrinkage stresses exceed the tensile strength of the concrete, must be the proper depth and must have the proper spacing. Otherwise, out-of-joint cracking may occur. These unwanted cracks are commonly called "random cracks" or "uncontrolled cracks" and typically create costly repairs and tear outs for contractors.

To avoid random slab cracking, contractors must understand the mechanisms that cause early-age shrinkage cracking so they can take the necessary actions to avoid these unsightly and costly cracks.

Concrete shrinks and expands due to moisture and temperature changes. Because of moisture loss, a 100-foot-long slab-on-ground can shrink from 0.48 to 0.96 inches over several months. If this slab also has a temperature drop of 50° F after casting, then it can shrink another 0.21 to 0.53 inches because of thermal contraction, yielding a total shrinkage of 0.69 to 1.49 inches. Of course, not all this shrinkage will occur during the first couple of days, but sufficient shrinkage does occur to create early-age cracks that will continue to grow in width as the concrete dries.

To reduce concrete dry shrinkage, only use enough water to produce the required workability for placing, consolidating and finishing concrete. As the water content of the freshly mixed concrete increases, so does the potential for dry shrinkage. Concrete suppliers can minimize the water content by adjusting the cementitious material content and combining aggregate gradation sizes to achieve a uniform aggregate distribution. Also, minimize the addition of water on site when adjusting slumps because additional water increases dry shrinkage of the concrete.

The risk of cracking can be appreciably reduced by reducing the number and severity of restraints. The biggest restraint preventing concrete shrinkage or slab shortening is the subbase. Always place concrete on flat, hard subbases that are free of ruts and holes. If necessary, use a thin layer of fine material to fill in the surface voids of rough subbases so the bottom of slabs are free to slip or move relative to the subbase. Other slab restraints can be eliminated by isolating slabs from footings, walls, columns and other elements such as drains, manholes and sumps by inserting preformed joint fillers between slabs and adjacent elements. Do not connect slabs to other elements with steel reinforcement or tie bars.

The rate at which shrinkage stresses grow primarily depends on the rate of moisture loss from the concrete by subbase absorption and surface evaporation, rate of concrete cooling, and the number and severity of concrete restraints. Whereas, the rate of strength gain is dependent on the rate of the chemical reaction between the portland cement (cementitious materials) and water. Strength gain is dependent on the amount and type of cement and admixtures in the concrete and the placing and curing temperature of the concrete. Cooler concrete temperatures delay the rate of strength gain. Concrete strength gain can be seriously delayed when placing concrete on cold subbases or during cold weather conditions. Also, concrete surface temperatures can drop significantly late in the afternoon when the sun sets causing both delayed setting and thermal contraction.

It is critical to saw cut contraction joints before the shrinkage stresses exceed the tensile strength of the concrete. Of course, the concrete must have enough strength so the sawing operation does not break or pull aggregate particles free from the concrete along the cut, creating jagged and rough edges. Sawing too early causes saw edge damage called raveling, and sawing too late causes random cracking, as illustrated in Figure 4.

Factors that affect the sawing window include:

If any of these or a combination of the conditions exists, the sawing window can be affected so that contraction joints cannot be installed before the shrinkage stresses exceed the tensile strength of the concrete and random cracking occurs. This is especially true when the rate of concrete hardening has been delayed by cool or cold weather conditions so that saw cutting is also delayed. In these cases, early-age random cracking is likely to occur while waiting on the concrete to become hard enough to sawcut without excessive raveling. In these situations, the concrete must be protected from moisture loss and temperature drops. Also, consider accelerating the rate of strength gain so saw cutting can begin sooner without excessive edge raveling.

If random cracking occurs before saw cutting the contraction joints, they typically extend across the entire width of the slab and likely are oriented perpendicular to the long direction of the slab. If cracks reverse direction and have unusual orientations with clusters, most likely they initiated on the bottom of the slab because of significant restraints caused by the subbase. In either case, sawing was too late to control the early-age cracking.

Saw cut depths for a conventional wet-cut saw should be one-fourth of the slab thickness or a minimum of 1 inch. For early-entry dry-cut saws, the depth of the saw cut should be 1 inch minimum for slabs up to 9 inches. Typically, most specifications require either an absolute minimum saw cut depth of 1 inch or specify a 1¼ with a tolerance of ± ¼ inch when using early-entry dry-cut saws.

Historically, designers and contractors used a rule-of-thumb that joint spacing should fall between two and three times the slab thickness. For a 6-inch-thick slab, this approach yields a joint spacing between 12 and 18 feet. Because of column spacings or economics, many times the actual joint spacing approaches or exceeds the maximum recommended joint spacing of 18 feet for a 6-inch-thick slab. This approach does not account for the shrinkage potential of the concrete, subbase friction, slab restraints, environmental factors and sensitivity of the owner to random cracking. Designers and contractors should take these factors into consideration when choosing joint spacings. The risk of random cracking increases as the joint spacing increases from two to three times the slab thickness as shown in Figure 5.

In 2006, ACI modified the joint spacing criteria to directly account for the shrinkage potential of the concrete. Now, joint spacings are based on three categories of concrete shrinkage as shown below.

On your next job, saw cut contraction joints before shrinkage stresses exceed the tensile strength of the concrete, use an early-entry saw to saw cut joints to a minimum depth of 1 inch and select a joint spacing that reflects the dry shrinkage potential of the concrete. Also, select smaller joint spacings if slabs are highly restrained or the owner is sensitive to random cracking.

What You Need to Know About Plastic Shrinkage Cracking