Knowing the length and depth of the cut is just the beginning when selecting the right saw for your customer's cutting applications. 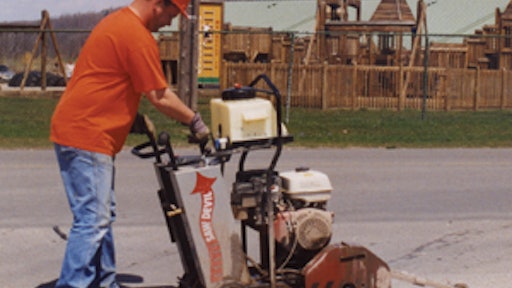 Walk-behind concrete saws come in a range of sizes, from compact 4- or 5-hp electric-powered models up to large, diesel-powered pavement saws boasting 65 hp or more. Determining which size will be most productive for a particular cutting task largely comes down to the length and depth of the cut, and the material your customers will be cutting.

Yet, selecting a saw is not that simple. Jobsite conditions and specifications, as well as the features of the saw itself, can influence which size and type will deliver the most cost-effective cutting performance.

"The smaller saws, like our CS1 entry level model, are great for patch work, small jobs, restoration," says Ed Varel, engineering project manager, Stone Construction Equipment. "You could use it on large expansion joints. But with a smaller saw, you run the risk of not keeping a straight line because you have more influence over the saw than the saw does over the cut."

Saws in this size class are well suited for residential applications, such as driveways or patios, as well as sidewalks and walkways. They are also a good choice for indoor applications, where their compact size and easy maneuverability can be an advantage.

The option of an electric motor in place of an internal combustion engine can also be an important consideration, particularly in confined areas with poor ventilation.

Another advantage of small saws is transportability. "With a small saw, two guys can put it in the back of their pickup truck and drive out and do the cut," says Richard Tremain, product manager, Husqvarna Construction Products. "Whereas, with a 35- or 65-hp saw, they're going to have to load it up on a specialized truck or trailer for transporting it out to the job."

Units rated at 13 hp or less generally come standard as push saws, with optional self-propelled capability on certain models. According to Tremain, the decision to add the self-propelled option comes down to economics and the job size. "If you were going to cut eight hours a day and you wanted to be more productive and not fatigue the operator as much, you would want to go with a self-propelled saw," he states.

As the number, length and depth of cuts increase, so do the power and size requirements for the saw.

"As a general rule of thumb, if your customers are going to cut more than 4 inches deep three or four days a week, then you would want to look at the 35- to 65-hp saws," says Tremain. "The larger horsepower is when you start with the professional guys who cut concrete everyday for a living."

According to Brenda Nabarrete at Soff-Cut, mid-size saws (roughly 13 to 35 hp) are well suited for use on small to medium-sized commercial slabs. "The larger saws are designed for big slab pours, or for decreasing the amount of time it takes to cut a slab," she adds.

Diesel power becomes available as saws go up in size. "The advantage that diesel engines have is their torque — they have a lot more than a gas engine," says Tremain. This can have a significant influence on the saw's ability to hold the blade at the required rpms under full load.

Of course, the saw must be able to effectively transmit that power to the blade, regardless of engine type. To maximize this power transfer, Husqvarna has introduced a right-angle gearbox on its larger models.

"Instead of mounting the engine transversely on our large saws, we mount it in line and we put the right-angle gearbox on the front with two output shafts," Tremain explains. "We're able to put 16 pulleys down to the bladeshaft — eight on each side — and we're able to transmit more horsepower from the engine to the bladeshaft." For example, the new 48-hp Target Pro 48 is capable of transferring 42 hp straight to the blade.

When it comes to making the cut, flexibility is also important. Consequently, some manufacturers, such as Stone Construction Equipment, have designed their saws to allow cutting on either side of the machine. "We have a shaft that enables you to cut on either the right side or the left side," notes Varel. "That's great for making your cut, then you can do a flush cut on the left side."
To facilitate switching the blade, the company includes a wrench mounted on the saw. "You can swap off the blade, hook it up to the other side, then move your blade guard over," Varel points out. "It's a little added convenience."

Other features available on mid-size and larger saws include built-in water tanks, as well as electric water pumps to deliver continuous flow and pressure throughout the cutting process. "Keeping the blade cool is a big contributor to productivity," says Varel. "The hotter a saw blade gets, the more warpage it will get and the worse the cut will be."

Husqvarna has also introduced an electronic tracking device on its larger models. According to Tremain, operators were previously required to manually adjust the rear axle. "It was so involved to change the tracking, a lot of guys would just lean real hard on the handle bars," he says. "That's real fatiguing, back breaking stuff. It's also really hard to cut straight when it's not set properly."

The electronic tracking system enables tracking to be adjusted left or right with the flip of a switch.

Although the length and depth of cuts is important, the material your customers will be cutting can have just as much influence on the type and size of saw required for a particular application.

"Aggregate, slab size, required depth of cut, curing time and sometimes sand can be important aspects of the project to consider when assessing saw/blade needs," says Nabarrete. "For example, if the weather is hot, the concrete may cure faster, thus requiring the joints to be cut sooner. In that case, a larger saw or additional saws on the job will help speed up the process."

Green concrete actually requires a saw specifically designed for such conditions. Most green cutting saws are lighter weight and more compact than traditional models, enabling them to get onto concrete sooner without disturbing the finished surface. For example, Soff-Cut's Ultra Early Entry saws can start cutting "as soon as you can walk on the concrete after finishing and not leave footprints," says Nabarrete. "Cutting any later than that leaves room for random cracking to form beneath the surface, causing unsightly surface cracks later on," she adds.

Green saws are also designed to "upcut" the material. "As you're pushing the saw forward, if the blade is mounted on the right-hand side, it is basically rotating in a counterclockwise direction," Tremain points out. Since green sawing is performed dry, this helps to keep dust from settling back into the cut. "If that dust gets back in there, it's green enough that it could go back in [the cut] and harden up."

The material to be cut and the desired cutting length generally dictate blade choice. Blade life is measured in inch-feet, or cut length times cutting depth. The amount of inch-feet you can achieve with a particular blade depends on the blade quality and the aggregate in the material.

"In concrete, you have different areas of the country that have different hardness of aggregates," says Tremain. In Kansas City, for example, material is fairly soft, allowing for good blade life in most cases. "If you use the same blade in Houston, TX, or someplace in the Florida panhandle, you're going to get 1/10th the life because it's real hard aggregate."

Blade suppliers can offer specific recommendations based on the inch-feet requirements and the aggregate in your particular region. Yet, it's also important to match the blade to the capabilities of the saw.

Diamond blades should also be matched to saw horsepower. "If you take a blade that's designed for a 65-hp saw and put it on a 13-hp saw, the smaller saw doesn't have enough horsepower to keep the diamonds opened up and fractured to keep the cutting process going," Tremain explains. "Basically, what happens is the diamonds round off and the blade ‘closes up' and won't cut."

"You can only cut as fast as your blade allows," agrees Varel. "If it's slowing down, chances are you're taking so much horsepower, the belts are going to start to slip."

Because so many factors go into proper blade selection, it pays to consult your blade supplier to determine which blade will be most cost-effective and productive given the material to be cut and the size of saw your customers plan to use.

Mid-size and larger walk-behind saws are generally all self propelled. "When you start getting above 13 hp, the weight of the saw itself comes into play," says Richard Tremain, Husqvarna Construction Products. "We have one with a 31-hp diesel engine that weighs about 1,000 lbs. You wouldn't want to push that." Even the company's 24-hp gas-powered model weighs 560 to 580 lbs.

The additional weight is needed to ensure the saw blade maintains a straight line while cutting. "Where you have a real long cut, you want a bigger, heavier saw that stays straight for a long period and does the work for you," says Ed Varel, Stone Construction Equipment.

Recently, lighter-weight, imported saws have become prevalent on the market. These saws tend to be less expensive than their domestic counterparts. "One of the ways they keep cost down is to use thinner-gauge metal. They lighten up the saws," says Varel. "If there isn't a lot of weight there, the blade tends to rise up out of the cut. If they don't have any way of getting weight onto the saw, that can be a detriment."

He adds, "We like to tout that we have a very heavy box frame that keeps the saw blade in the cut."

Heavier material can also influence the service life of the saw. "It might cost you 25-percent more to buy a domestic saw with higher quality versus an import," Varel contends. "But you'll get five, six, seven years longer life than what you might see with the less expensive saw."