Delta BJDS takes down the NASDAQ building's terrarium in a hurry with remote-controlled demolition machine. 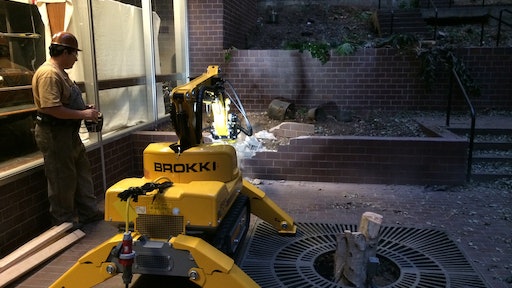 Augie Scalici of Delta BJDS demonstrates a swift demolition of a brick wall with a Brokk 100. He was able to entirely demolish the wall in 14 minutes .

Three weeks. Twenty-one days. Five hundred and four hours. However you want to measure it, it’s not much time to complete a complicated indoor demolition project. But that’s all the time allocated for knocking down and clearing out a terrarium in the center of one of America’s most historic structures, the NASDAQ OMX PHLX building, formerly known as the Philadelphia Stock Exchange.

While the NASDAQ is known to move fast, the East Coast demolition company, Delta BJDS, would need to move even faster. Every second would count, and there would be no time for indecision or speculation regarding equipment. No problem for Delta BJDS Superintendent Pete Punchello. He knew exactly what he wanted and needed to get the job done on time.

A 30-foot-tall terrarium had to be knocked down. Mounds of dirt, several trees and some waterways had to be torn out. Since several offices surrounded the space, crews would need to work 12 hours each night to avoid disturbing NASDAQ employees. That cut the number of potential working hours from 504 to 252. Last, but certainly not the least of the challenges, a small passenger elevator provided the only access to the project.

Punchello had been interested in adding a Brokk machine to his fleet for years. He placed a call to Randy Rich, who covers the Mid-Atlantic region for Brokk, and Rich recommended he use the Brokk 100 Remote-Controlled Demolition Machine. Not only was it small enough to fit into the elevator, but it also had the power to complete the job quickly. And since Brokk equipment is electrically-powered, it was ideal for the indoor project.

“They realized that the Brokk 100 would save them immense time and manpower compared to using jack hammers and chipping hammers,” Rich said. “And from that moment on, the Brokk machine ran every night until the job was done.”

Delta met the tight deadline, and the Brokk 100 saved wear and tear on Punchello’s crew in the process. He was able to repurpose crewmembers who otherwise would have been manhandling handheld tools, which aided in meeting their deadline. Overall, he said, the remote-controlled demolition machine made for a much more organized, safer and less physically trying project.

“If I had chosen to have any other type of equipment down there, trying to do what the Brokk 100 did, it would have been a constant headache,” Punchello said. “I would have been constantly trying to fix things, but with the Brokk I didn’t have to. The machine did everything we needed and wanted it to do.”

In fact, he said, Delta was so pleased with the Brokk 100 that shortly after the NASDAQ project it was already considering the purchase of the next largest machine, the Brokk 160.

Three weeks. Twenty-one days. Two hundred fifty-two hours. However you want to measure it, the Brokk 100 made it possible for Delta to do the job well and get it done on time.