Atlas Copco USA, through the employee-led Water for All program, donates $13,000 to Can’d Aid, who will provide resources for the 50,400 people left without water after the winter storm in Austin and Houston. 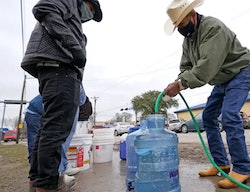 Unlike many mid-western states, Texas was unprepared for the cold snowstorm that impacted their infrastructure, electric grid, roadways and daily living tasks. After the winter storm hit the southern state, many lost power, heat and were left without water.

As of Feb. 19, 13 million people lacked access to clean, running water, according to CBS News. Due to the winter storm accompanied by frigid temperatures, many Texan civilians found that their water pipes froze and exploded — an unexpected occurrence for the state of Texas.

With limited alternative solutions in sight, Atlas Copco USA (Atlas Copco) issued its employee-driven Water for All program to provide fresh and clean drinkable water to the Texan population, a relief for many. This initiative is a partnership with Can’d Aid.

“We have hundreds of colleagues, their families and multiple locations across Texas,” said Aaron Prato, vice president of Atlas Copco North America LLC. “We see the devastation, and our hearts go out to everybody affected. This is just one way we will play a part in the work to get the area back on its feet.”

Atlas Copco donated $13,000 to Can’d Aid, who will utilize the money to send 50,400 cans to Austin and Houston. This donation will aid approximately 8,400 people and roughly 2,100 families in need.

The program, which was created in 1984, reaches millions of people globally and currently has organizations located in over 50 countries. The program was designed to help provide clean drinking water, sanitation and hygiene for people in need. According to Atlas Copco, for every amount an employee donates, the company doubles the match — reaching 2 million dollars in 2010 to clean-water projects.

Atlas Copco joins many other companies working together to provide relief for those impacted by the unexpected frigid temperatures and winter storm.

Atlas Copco Supports Water for All Project in Malawi