Repairing an entrance threshold to a cold storage facility doesn’t have to be a disruptive experience. 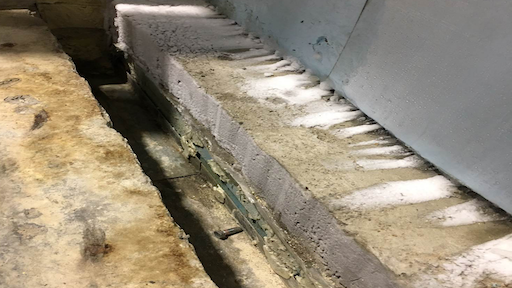 The damaged threshold area has been removed to allow for a permanent repair.

It’s not always easy to convince customers that a concrete repair product will be the last solution needed to fix a crack, joint or spall in a commercial or industrial application, because most expect a predictive failure of any product used in a harsh environment. That doesn’t seem to be the case for Roadware’s 10 Minute Concrete Mender.

Richard King II, vice president of sales and partner at Roadware Incorporated, pointed to the success one of his distributor/contractor has experienced repairing damaged cold storage thresholds, where forklift operators beat a path in and out of the subzero environment.

“On one side of the threshold the temperature can be 40-50 degrees F, while on the other side the temperature is minus 20 F or lower depending on the operation,” King notes. “Pro’s Choice Concrete Products LLC of Platte, Mo., has been repairing concrete surfaces in cold storage facilities for the past 20 years, and recommending and installing the 10 Minute Concrete Mender has been a relatively easy proposition when considering the standard epoxy solution.

“We’ve been working with Pro’s Choice Concrete to educate customers of the advantages and reliability of our product,” King says. “Everyone uses epoxy to repair concrete in a cold storage facility and it fails.”

As King notes, to install an epoxy patch, you first have to empty the storage area in order to bring the temperature up to a minimum 40 F. Having to temporarily move the contents from a cold storage area to a reefer is in itself a major inconvenience. But going through the time and expense to move the valuable contents only to know the repair will eventually fail and have to be done again is frustrating and completely avoidable.

“It’s simple science. When you raise the temperature (of the cold storage area) to repair the failed concrete area, the concrete expands,” King states. “When you lower the temperature back down to minus 20 or colder, there will be contraction (shrinkage) of the concrete and the epoxy repair will fail.

The reason 10 Minute Concrete Mender provides a long-term, even permanent repair is because the viscous nature of the liquid repair allows it to penetrate deeply into the structure of the concrete to form a “Microdowel” bonding to the solid substrate of a concrete slab. Granted it takes longer for the repair to cure in a cold environment (optimal curing temperature for the product is 70 F); however, it is not exposed to the expansion and contraction forces that occur when raising and lowering the temperature of the treated area. In a flash freezer application, King adds, where the temperature in the facility was minus 50 F, it did take three to four hours for the repair to cure, but there was no disruption to the operation and the contents of the facility did not have to be removed.

“Unless you’re working in a cold storage facility, it’s difficult to understand how frustrating it is to maneuver over damaged concrete with either a forklift or pull cart,” King says. “And contractors are fed up trying to use other repair products and solutions that eventually fail.”

For Bob Kobush, the contractor owner of Pro’s Choice Concrete who repaired the damaged cold storage threshold, recommending, installing and training others how to install the 10 Minute Concrete Mender has become his new mantra. Whether it’s a customer who self-performs building maintenance or another contractor looking for the right solution, Kobush is confident he can deliver a permanent solution.

To repair the threshold, saw cut an 8 to 10-in. wide by 8 to 10-ft. long section and removed all material to a one-foot depth. In a typical threshold epoxy fix, the damaged area would be removed and replaced by a 4 by 4-ft. timber, covered with dense foam sheeting, which would then be covered with epoxy. Once the temperature in the cold storage is lowered to minus 20, the epoxy would snap.

The repair Pro’s Choice installed was executed in layers using heavy aggregate to displace the Mender liquid deep into the surrounding concrete slab. The surface tension of the liquid solution is so low that it’s attracted to the rock content of the surrounding slab. In subsequent layers of the repair, more aggregate and a high-grade of sandblasting sand were used to expand and thicken the liquid Mender.

“We spent five years testing this product on all types of warehouse slab issues like cracks, spalls and failed joints, and we encouraged forklift drivers to drive over the repair as soon as it’s cured to prove that it would stand up to the rigorous environment of a warehouse operation,” King says. “And when it comes to cold storage facilities, finding a permanent repair that doesn’t disrupt the operation is critical because a cold storage facility is the most expensive space to operate of any warehouse facility.”

Structural Polyurethane– A polyurethane based material that restores structural integrity and aggregate interlock to distressed concrete through a bonding action that utilizes capillary forces to self-inject polymer chains into the surrounding concrete. This material may be combined with manufactured sand to form a PCC compatible polymer concrete that can structurally repair concrete cracks and spalls.

Advantages– Due to the very low surface tension of the material and low viscosity, complete saturation bonding of cracks can be easily achieved. Minimal prep to remove loose debris is all that is normally required.  This can be considered a structural repair if the material is allowed to gravity flow to the full depth of the crack. Manufactured sand or quartz may be introduced into the repair as necessary to prevent under slab ponding and material waste.  When repairing cracks wider than .125 inches, specified sand may be added at a ratio of two parts sand to one part mixed polyurethane as the crack is filled to extend the material and add strength. The sand also brings the thermal coefficient of expansion of the repair material closer in-line with surrounding concrete. Polyurethanes of this nature may be applied in a wide range to sub-straight temperatures making them useful in frozen and cold storage warehouse applications or cold weather application below minus 20 F.

Limitations- The surrounding concrete must be surface dry, cured for at least 60 days. Finished repairs may, “yellow” in appearance over time when exposed to UV sunlight. In exterior conditions, only low to non-movement cracks should be repaired.