Almost all of the job loss was in nonresidential construction, a segment in which employment declined by 60,800 jobs on net in February. 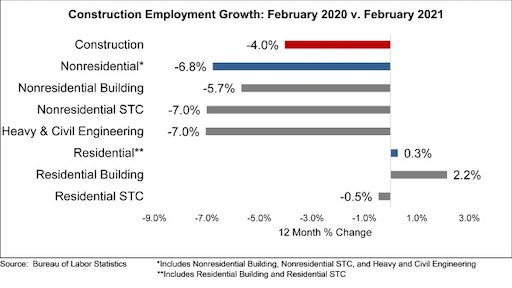 The construction industry lost 61,000 jobs on net in February, according to an Associated Builders and Contractors analysis of data released today by the U.S. Bureau of Labor Statistics. During the last 10 months, the industry has added 805,000 jobs, recovering 72.3% of the jobs lost during the earlier stages of the pandemic.

Almost all of the job loss was in nonresidential construction, a segment in which employment declined by 60,800 jobs on net in February. Nonresidential specialty trade contractors and heavy and civil engineering both experienced significant job losses, losing 36,700 and 20,800 jobs, respectively. Nonresidential building lost 3,300 positions.

The construction unemployment rate rose to 9.6% in February and is up 4.1 percentage points from the same time a year ago. Unemployment across all industries dropped slightly from 6.3% in January to 6.2% last month.

“Today’s employment report should not cause alarm among stakeholders in the nonresidential construction industry,” said ABC National Chief Economist Anirban Basu. “In recent months, contractors have become more upbeat regarding industry prospects, as indicated by ABC’s Construction Backlog Indicator, citing rising backlog and expectations for rising employment, sales and even profit margins. While the loss of employment is never pleasant, February data were impacted by weather-related interruptions in the South, which likely resulted in some temporary job loss, but tells us little about fundamental industry dynamics. 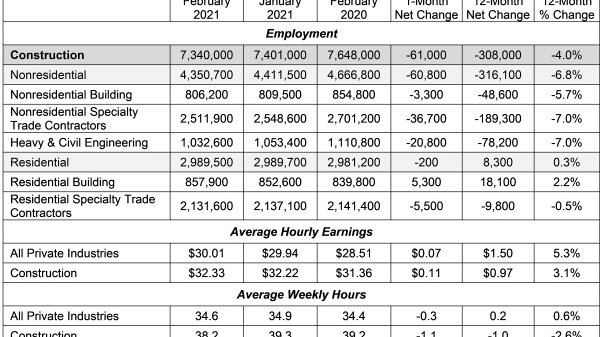 “The balance of the economy appears to be outperforming expectations in terms of labor market recovery, and there is now growing evidence that more pervasive vaccinations are beginning to shape economic outcomes for the better,” said Basu. “Stimulus passed by the previous presidential administration has helped to further bulk up consumer spending and there is more stimulus on the way. All of this is consistent with ABC’s long-standing forecast that the second half of 2021 will be spectacular for economic growth.

“Therein lies a potential challenge for contractors: the economy could get too hot during the months ahead,” said Basu. “Already, interest rates are on the rise and inflation expectations are at multi-year highs. A sharp rise in borrowing costs could truncate the duration of the nonresidential construction spending recovery to come, particularly in the context of still-shaky public finances and altered commercial real estate fundamentals. The optimal outcome would be solid growth coupled with moderate inflation, but the economy may end up generating euphoric growth for a time followed by a less supportive environment for construction starts and consistent economic growth. But such concerns are longer-term and speculative.”