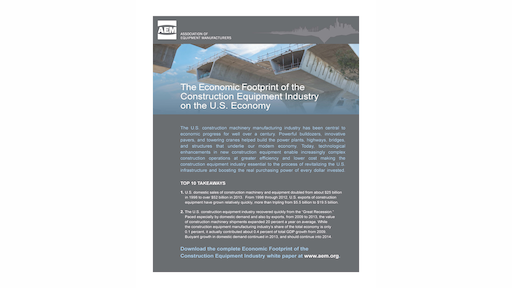 A new report released by the Association of Equipment Manufacturers (AEM) highlights the contributions of the construction equipment (C.E.) industry to the American economy by supporting hundreds of thousands of high-paying jobs and billions in economic activity in its industry area.

The report – authored by Inforum, an economic industry research organization at the University of Maryland – underscores both the growth in the C.E. industry over the last decade, along with the threats posed by diminishing government investment in infrastructure projects and eliminating support for manufacturing exports. The full report can be accessed here.

“The construction equipment industry contributes so much to our economy, and this report illustrates the vital importance of ensuring that this industry can continue to flourish and grow,” said Dennis Slater, the president of AEM. “However, this report should also serve as a wake-up call to members of Congress, who can bolster the construction equipment sector by voting to reauthorize the Export-Import Bank, and finally passing a long-term, fully-funded highway bill.”

The report speaks directly to the impact of public policy issues on the C.E. industry. Exports of construction equipment have more than tripled – from $5.5 billion to $19.5 billion – over the last decade, according to the report. Lawmakers are currently weighing whether to let the charter of the Export-Import Bank, which helps support many of these exports, expire.

The report also calls the trajectory of government spending on infrastructure “the biggest uncertainty” facing the industry. The report shows how infrastructure investment has been cut in half since its peak in the 1960s, and how lawmakers’ failure to invest in infrastructure going forward will hurt most Americans. Infrastructure deficiencies will cost each household an average of about $4,500 per year by 2020, the report says, a cost which will rise to almost $7,800 per year in 2040. Deficient infrastructure is also projected to reduce cumulative GDP by $900 billion over the next decade.

“Failing to invest in our infrastructure won’t just hurt the construction equipment industry,” Slater added. “All Americans should be concerned about the costs associated with congressional inaction on major infrastructure projects.”

AEM is working to push Congress to pass a long-term highway bill and to support other policies that support construction equipment manufacturing. A printed version of the report will be delivered to key members of Congress this fall.

The report will also be promoted through a series of infographics on the I Make America Facebook account and @IMakeAmerica on Twitter, which will be released over the course of the week.

Top 10 Takeaways: The Economic Footprint of the Construction Equipment Industry on the U.S. Economy

Contractors need to put a plan in place for a more profitable restart of their construction business, as well as to prepare for PPP loan uncertainty.
Garry Bartecki
June 16, 2020
Follow Us