The new facility represents a $4 million investment and includes a new 12,300-sq.-ft. headquarters facility, modern training facility and administration offices, as well as a 21,500-sq.-ft. parts warehouse and storage building 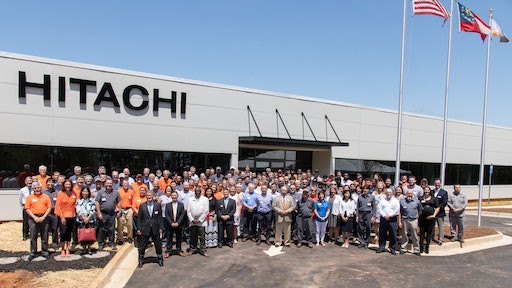 In a blending of supporting cultures, the celebration featured an assortment of Japanese and American ceremonies. These included a ribbon cutting, factory and headquarters tours, a traditional Japanese Sakura Ceremony, a Kagami Biraki Ceremony, presentations from visiting guests from Hitachi Construction Machinery (HCM) in Japan, and a traditional southern U.S. BBQ lunch.

The new Newnan facility represents a $4 million investment by HCM to HCMA. The initial phase consists of a new 12,300-sq.-ft. headquarters facility, complete with a modern training facility and administration offices. Also included in this first phase is a 21,500-sq.-ft. parts warehouse and storage building.

The investment represents the confidence HCM has in the Hitachi Construction Machinery Loaders organization and distribution network, and represents the foundation to support anticipated market expansion of Hitachi wheel loaders in the North American market. HCMA anticipates tripling its market share in the next five years.

“The introduction of the Hitachi-branded loaders and the new HCMA headquarters exhibits the Hitachi commitment to the foundation of our business, our customers, our dealers and our employees,” said David Agan, VP - Corporate, HCMA.

Following the traditional Southern BBQ lunch, Mr. Masaaki Hirose, president, HCMA, addressed the group and reiterated HCMA’s appreciation of the support from Hitachi Construction Machinery, and looked forward to the Hitachi wheel loaders becoming a mainstay in the industries served.

The existing U.S. infrastructure funding law is up for renewal by Sept. 30, and the administration sees that as a possible vehicle to push through a broader package
AC Business Media
June 16, 2020
Follow Us