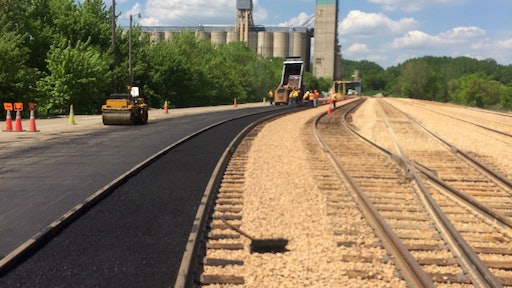 Valley Blacktopping Inc. started its 2014 season with a challenging job that required paving in between more than 1,500 ft. of railroad tracks, no easy feat without a lot of shoveling. But Valley Blacktop’s Scott Johnson designed and built a system that saved time, money and sore backs.

The early-season job was at a large Cargill grain elevator facility in Savage, MN, south of the Twin Cities.

“We were brought in because they were doing major improvements with all their railroad tracks, removing the old tracks and installing new tracks,” says Valley Blacktop’s Ryan Johnson.

Johnson says there were five sets of track running parallel to each other and Valley Blacktopping first removed the existing 9-in.-thick asphalt pavement from between the rails so the old rails could then be removed. Using a cutting wheel attachment on a skid steer, the 7-person crew cut the asphalt parallel to the tracks all the way along a 1,500-ft. stretch to release the asphalt from the tracks.

“After cutting we used a jackhammer on a skid steer to break up the asphalt,” Ryan says. Then they used buckets attached to Case skid steers (430 Series 3, 435 Series 3 and SV250) to remove the broken asphalt working perpendicular to the tracks. “The skid steer fit between the sets of tracks which made that part of the job easier.”

He says all material was hauled away and once that was done the railroad company came in and removed all the old tracks. After the tracks were removed Valley Blacktopping used a Fiat Allis motor grader to prepare the surface for the new tracks. Once the site was prepared the railroad company spent about a month installing the new tracks. Then Valley Blacktopping went back in and started paving between the tracks.

“We’ve patched in between railroad tracks before but the process was slow and difficult,” Johnson says. “Normally we scooped material out of a dump truck, then dumped the mix between the tracks and spread it by hand with shovels. It was all hand work.”

But that process would have taken an unreasonably long time -- especially when you consider Valley Blacktopping had to pave it in three lifts to about 9 inches. So Ryan Johnson’s uncle, Scott Johnson, went to work. “He has an immense amount of patience and really likes trying to figure things out and it really paid off,” Ryan Johnson says.

Scott Johnson designed and built a cart with an adjustable blade and wings that would place and level the mix. That cart enabled Valley Blacktopping to place a consistent mat at a reasonable pace, getting the job done ahead of schedule – and without the backbreaking labor that otherwise would have been needed.

The cart featured eight wheels – four that sat on top of the rails and four wheels outside the track to keep it from shifting off the track. Johnson says they considered buying actual rail car wheels but they were so expensive we opted for another design. The leveling bar was fully adjustable so every time they crew completed a pass they just raised the leveling bar for the next lift. Johnson hooked the cart to a Craftsman garden tractor (because it was the right size) with the mower deck removed and that pulled it. “We used a skid steer loader to dump asphalt in front of the leveling blade and pulled the cart right down the rails,” Johnson says.

Prior to paving the final 3-in. lift, the nine-person crew nailed 1 in. x 2 in. pieces of wood next to the inside of the rails to create space next to the rail for the rail car wheels.

Johnson says each lift was compacted, first at the edges using an IR BX-6 vibratory plate compactor. That was followed by a Wacker RD12 vibratory roller, which fit right in between the tracks. A Beuthling B105 static roller was used for finishing each pass.

Johnson fabricated the cart in the Valley Blacktopping shop, brought it to the jobsite and it worked well right from the start. Ryan Johnson there are some tweaks they will make if they need to use it again but on the whole it performed as well or better than expected.

“We were excited to have such a large job to start the year off,” Johnson says. “The job seemed a little daunting but once Scott got a look at it and began figuring out a way to ease the process it wasn’t bad.”