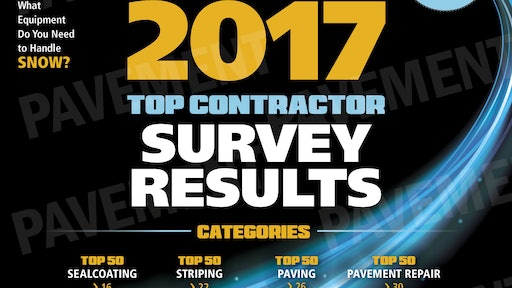 Last year in this space we discussed how Pavement’s Top Contractor lists had stabilized, with the Paving, Sealcoating, Striping and Repair lists each containing 75 companies. We lamented the loss of the Sweeping category, as fewer than a handful of true sweeping companies decided to participate, but on the whole we were encouraged by the participation and growth of the lists.

So for the 2017 Top Contractors each category contains 50 companies. Because lists are based on dollar-volume of sales within each category (striping-only or sealcoating-only sales), contractors who might have qualified had we been able to list 75 firms are not going to be included. Also, the results in overall sales dollars and segment-only sales dollars will understandably me smaller, but the results should be no less valid for the companies included in the lists.

Because of the reduced participation we won’t make apple-to-apple comparisons of year-to-year results; instead we’ll report them as reflective of the current state of the industry. In some cases we’ll compare results to previous years, but we’ll note any differences in list size that might account for any differences.

So let’s start with overall sales dollars of the participating contractors, which topped $910 million for the 2017 lists. That’s a decline from $1.717 billion in 2015 and $1.188 billion last year (but remember some of the lists in those years had 75 companies and for 2013-2015 there was a small Sweeping list, too). That overall sales number represents the combined total of only paving-only, sealcoating-only, striping-only, and repair-only sales – in other words the sales figures used to compile our four lists. No sales dollars are duplicated and any sales relegated to the “Other” sales category also are not included.

While we can’t quantify the size of the industry (a question we are asked routinely), we can report that all sales from all companies participating in the survey, whether they qualified for a list or not, tops $3.587 billion for 2017 list participants. This number is the sum total of all sales for all contractors who fully completed a survey form.

The 2017 lists reaffirm what we’ve known for some time and what the lists have confirmed since started in 2013: Diversification is an essential component of the contractors with the largest sales volume. Almost all companies on all the lists perform a variety of services for their customers:

·         None of the Pavement Repair 50 provide only repair services (no surprise there and none generate more than 70% from pavement repair).

The takeaway then, is, larger contractors see value in diversifying. So if you want to grow – consider diversifying your service offerings.

If National Pavement Expo has a mantra it’s encouraging contractors to diversify, both to strengthen and to grow their business. Just as a diversified investment portfolio can better weather economic ups and downs, a contractor who offers a variety of services can more easily adapt to changes in the economy, the local market, and competition from other contractors. Also, offering a broader variety of services enables contractors to keep that revenue in-house – as opposed to hiring a subcontractor (often a specialist, see below) to do that work – which helps profit and growth.

In addition, contractors that offer a variety of services are able to generate more dollars from each customer, which potentially makes each sales call and contract awarded that much more profitable. These diverse contractors make themselves more valuable to each customer by enabling the customer to solve a wider variety of problems with one phone call. That, in turn, strengthens the contactor/customer relationship.

And the survey results also show that diversifying shouldn’t stop at the services offered, though that’s often the first thought that comes to mind. Even a quick glance at the Customer Mix and the Where We Work categories in the Top Contractor lists over the following pages clearly shows that to generate the sales that put them on these lists, contractors work for a variety of customer types and on a variety of different pavement locations. The vast majority of contractors an all four lists work on a variety of pavements (highways being the smallest percentage) with parking lots not surprisingly leading the pack, and they work for a broad variety of client types.

But what about the “specialists,” the contractors that provide only one service or that rely very heavily on one service? Those are companies that most likely work closely (and probably as subcontractors) with larger contractors who hire specialists to perform work they don’t want to perform or to keep jobs moving, thereby increasing productivity.

As you can see, each year for the industry as a whole there’s a broad range of profit margins with which contractors are working. Some of the differences become clearer when we look at each industry segment, but the good news is that a healthy percentage of contractors are reporting what could be considered healthy margins – and better yet these margins have shifted a toward the higher side since our first Top Contractor list in 2013. As evidence, take a look at the “More than 15%” category which is showing a steady staircase improvement each year (and the “Less than 3%” and “3-5%” categories, are trending downwards).

So survey results indicate that 44% of contractor reported margins greater than 15%; another 33% reported margins in the 10-15% range. That means that 77% of contractors responding generates profits of 10% or greater. It’s important to note, however, that because all the lists where whittled to 50 rather than 75 companies – meaning 25 companies with lower sales volumes were left off -- there’s a possibility that profit margin results are skewed toward the higher end. But it’s only a possibility. There’s as good a chance that smaller companies with lower overhead could be reporting double-digit margins too.

In last year’s white paper Pavement asked the question, “Is there a ‘most-profitable’ pavement maintenance service?” Over the following pages profit margin results are broken down within each segment – and arguments can be made for both paving and sealcoating -- but the short answer is probably “No.” The four categories are very similar in their margin breakdowns with the following reporting margins of 10% or more (percentages in parentheses are last year’s figures when lists contained 75 companies each):

Note: In the past Pavement had held back some survey results, making them available in a “white paper” analysis that was sent only to those companies that participated in the survey (whether they qualified for a list or not). The purpose of that was to encourage participation – people who completed the form received additional survey results and some analysis of the results from Pavement. But as an incentive to encourage participation that white paper analysis didn’t work, so much of that information will be revealed in this issue.

Tips on how reducing wasted time on a job can save you money
Brad Humphrey
June 10, 2020
Follow Us