Chalk a parking lot striping lay out to prevent mistakes 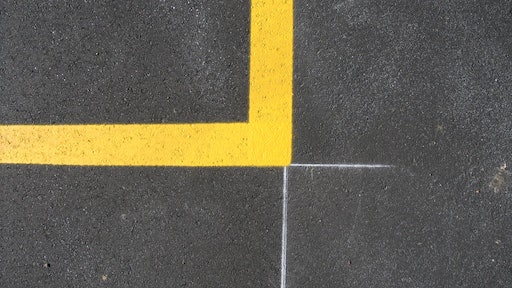 My first reaction is to say that snapping chalk lines is easy and quick!  But that's not what they want to hear. Snapping lines really is easy if you know what you are doing, but I will get to that in a moment. First, let’s look at the alternatives to snapping lines:

Freehand painting: I had a veteran striper tell me that he could paint straight lines without any guides. He said, "Just aim the machine like you would aim a gun." He would make a mark at the beginning and end of each line, point the striper, and take off.

It did save a lot of time for him, but the results were not good enough for me. I could drive by a lot and a quick glance told me that it was one he painted. None of the lines were perfectly straight, and there were always a few "banana lines" where he rolled over a pebble or just made a mistake in his lineup. Maybe those lines were good enough for him and his customers, but I couldn't sleep if mine looked like that.

String lines: I know a striper that uses nails or weights to hold a tight string. He works alone, driving concrete nails into the asphalt pavement and tying string lines to the nails to make his layout. When he gets through, there is string all over the parking lot.

He says it's faster than chalk lines, but I tried it on a few jobs, and it's not. Also, since he paints his line next to the string, you can see the mark left by the string in the overspray from his striper.

String and spray paint: This is how the long-line guys do it on highways. Pull a string out tight and spray dots of paint with an upside-down spray can.  Then paint to the "shadow" left by the string.

This is a good way to do it; you do get a straight line to follow, but on short lines it takes a lot more time than a snap. Also the dots of paint left behind are unsightly because they remain on the pavement a long time.  You could use spray chalk instead of paint, but the chalk might keep the striping paint from sticking.

Two helpers and a rope: Not a bad way to do it. You make your layout marks at the beginning and end of each stripe and have two helpers pull the string tight over the marks.

This can be an especially good method when you are doing a big parking lot with multiple rows of parking that line up with each other. Pull the rope tight and paint all the way from one side to the other. But it does take longer than snapping chalk lines on single or double rows.  Also, on windy days the string can move around and make you paint crooked lines.

AutoLayout: The instructions for my Graco AutoLayout show that you can use the machine to make layout marks at the beginning, middle, and end of the painted line, then aim the striper so that you paint a straight line. The AutoLayout technology lets you do this quickly, and it measures and marks quite accurately. But every now and then a rough spot or loose pebble will cause the machine to get off track and you won't know you’ve gone off line until it's too late.

So, you really should snap a chalk line for every line you paint. Not what you wanted to hear, is it? Well, maybe you are just making snapping a chalk line harder than it really is. With a little practice, it gets faster and easier.

You don't snap it like a carpenter, pulling up in the middle and letting go -- that only works on flat boards and short distances. Snap the chalk line like a striper -- hold it tight on one end, then whip the other end with a flick of the wrist. With just a little practice you can snap quickly, straight, and mark over high spots and low spots (not like the carpenter method that only hits the high spots).

Then, after you get the lines snapped, step back and look at the layout. This might be the biggest advantage of snapping chalk lines – you get a chance to see if you have made any mistakes in the layout before you begin putting paint down. The chalk lines show where the paint is going and lets you see if you made a mark in the wrong place or if you got something out of square. It's a lot easier to fix if you spot it before you paint.

I have been doing this for 25 years, and I am a lazy guy. I don't like to do more than it takes to get the job done. I'm also a busy guy and like to get done as quickly as possible. I have tried all these methods and more. I have practiced them until I got the hang of it, and then timed the work. I snap all my lines, because that the quickest and easiest way to a good job.

An annual speaker at National Pavement Expo (NPE) and moderator of the NPE free Stripers Roundtable, Robert Liles is owner of Robert Liles Parking Lot Service, Tyler, TX, and a member of the Pavement Advisory Board since 2002. He also runs the industry’s most-visited striping website, www.parkinglotplanet.com.

10 Things to do Before the Paving Season Starts

As a large portion of the country is starting to defrost from the winter, it’s time to look ahead to the warmer months. Make sure your construction business is ready for the busy season with these tips.
Jessica Lombardo
March 11, 2021

Build your skills as a supervisor and prepare yourself for future leadership responsibilities with these tips.
Dormie Roberts
March 10, 2021
Follow Us