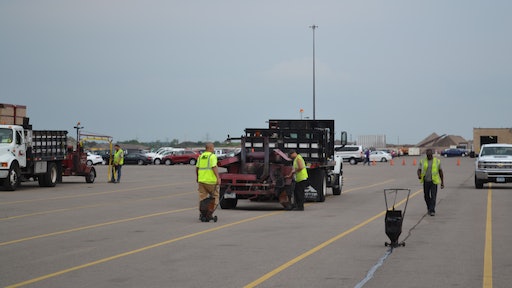 It’s not everyday that your company gets to bid on a project that’s more than twice the size of something its ever tackled. That’s the opportunity Minneapolis-based ACI Asphalt & Concrete Inc. was afforded last spring -- and it's the job for which the contractor was awarded the Pavement Seal & Stripe: Large Job Award for 2018.

But it wasn’t the size that proved to be the most challenging aspect of the job. Instead, it was the frenetic activity that surrounds the facility.

In business since 1993, ACI has patched and seal coated its share of large parking lots in commercial, industrial, and municipal markets throughout the Midwest. This, however, isn’t your ordinary parking lot. The customer is Manheim Minneapolis, a huge car auction company. The 2 ½ million sq. ft. of asphalt houses thousands of cars and is not only the backdrop for multiple auctions daily, truck haulers and potential buyers make it their destination virtually nonstop throughout the week.

The work was to be completed in two phases. The first phase involved sealcoating the 315,000-sq. ft. front parking lot.  Sealcoating the 515,000- sq. ft. back lot several weeks later would complete the project. The customer also used the opportunity to do a new striping layout.

“Timing was a bit of an issue early on,” explains ACI general manager Jeremy Quinn. “The customer planned on hosting a NASCAR driving experience over Memorial Day weekend. That meant we had to sealcoat the front parking lot sometime in early May, about the earliest it could be done in this part of the country.  The larger portion of the job, phase two, could wait, and was completed in August.”

The game plan was relatively straight forward. Work weekends to minimize disruption, move a huge number of cars out of the way, and sealcoat. The good thing, says Quinn. “Manheim knew how to move cars and we knew how to sealcoat so working closely together we made it work.”

Logistic success depended in part on a section of the back lot that was recently paved and didn’t need to be seal coated yet. That area, and the fact the lot was not totally filled with cars (autos took up approximately three quarters of the lot), provided enough wiggle room to create open space for sealcoating. Still, as Quinn notes, the client needed to round up more than a few troops to relocate thousands of cars in a timely fashion.

Phase one and two had their individual challenges.  As mentioned, phase one had to be completed in time for the Memorial Day charity event during the unpredictable spring sealcoating condition. It was, however, less of a logistical problem since the area was used primarily for customer and employee parking.

Phase two was more challenging; there still needed to be access to the cars This was made possible by keeping a road open only to be sealcoated at the very end.

During both phases, crews began patching and crack sealing on Friday night. They sealcoated over the weekend and the cars were able to be moved back 8:00 Monday morning after the sealcoat had cured.

Three four-person crews, for patching, crack sealing, and sealcoating, worked the project. Several crack sealing machines and melters, along with two spray buggies were employed. A spray wand was used for close-up work next to buildings.

Phase one may have been easier from a logistic perspective, but it had a surprise in store for crews, relates Quinn. “Right after completing the asphalt patching a car started on fire and burned the asphalt in a section we needed to sealcoat for the charity event. We repaired the area right away and were able to complete phase one in time for the event. It was a bad surprise, but it couldn’t have happened at a better time since crews were able to get back on site quickly and make the repair before commencing sealcoating.

“The overall job was completed on schedule and the client was appreciative of how efficient and flexible the ACI teams was.  The head of property at Manheim’s parent company said, ‘everything was great! You guys are always very responsive and professional, which I can appreciate. You worked well with Manheim directly, which makes my job easier.”

A hot-applied, pourable, flexible repair that bonds unlike any other patching material— Mastic One creates a picture of what’s possible.
August 1, 2020
Latest