Bad reviews can be a problem for any small business. Here are some tips on how to handle unfair online reviews. 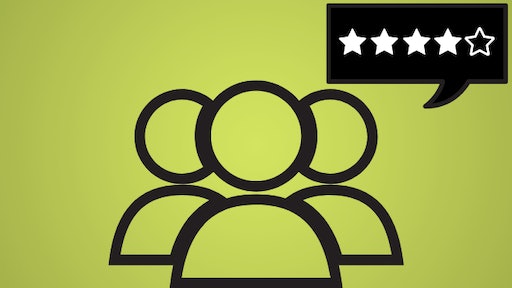 I’ll admit, I’m a review snob!  That’s right, I’m a Super Diamond Platinum Expert Pro (or whatever it’s called) on TripAdvisor and I love to review businesses that I have used. I feel it’s a way to reward a business that has gone above and beyond, but it’s also a way to send a message to those that have let you down.

I also enjoy reading reviews because I use them in making decisions -- and I’ve come to use them more than I ever thought I would. In fact, reviews will almost certainly guarantee what I buy...or don't buy. The first generation of reviews was called Feedback on eBay, and it’s a great way to trust or not trust a seller. Those Feedback reviews have morphed into reviews on Amazon, TripAdvisor, Yelp and more.

So how does this affect our pavement businesses? Well, let me tell you how I learned the hard way.

Last summer we were working through several large sealcoating projects on commercial sites. As we all know, any time you cause an inconvenience for customers or employees at these shopping centers, it’s not the best situation, but it usually goes away... Or it did until Google reviews came along.

Google reviews are intended for users to review business that they have done business with. The flaw, in my honest opinion, is that reviews often are not restricted to companies the reviewer has done business with. So back to this project. We had caused an employee to have to park in a different spot than her “normal” one. Well, she took her displeasure to Google reviews and made us out to be not so good in the eyes of the Internet.

Naturally we responded to the review and pointed out that we had not done business with her. We also flagged it for a violation of Google’s terms of service. Neither worked, and our rating plummeted. This is a huge problem because when people look for asphalt services, often they are met with results and reviews.  Why would anyone call the “2 Star” company, as they are surely a disaster, right?

Well, fast forward to the next week, another commercial shopping center. This time we encountered a gentleman who didn't feel the need to take the detour as he wanted to use the exit he always uses. So he demanded we move the cones and let him on his way. Of course we weren’t about to do that as he would have gotten sealer all over his car.

A few hours later and we were hit with yet another negative review, grossly exaggerating the situation. It was just another situation of an inconvenienced person venting their frustrations. Again the review was not removed despite it being a clear violation of Google’s own rules. We were getting a crash course in Google reviews and how they can dramatically affect your business rating.

Our story ended up with us having to solicit more real reviews from actual customers to outweigh the two phony ones. We also learned that we have to really muzzle ourselves and can’t interact with people as we once did for fear that they now have a huge advantage over us.

Fortunately all my TripAdvisor reviews were always fair and very detailed. Even when I had a bad experience at a hotel, I document it well so the review was not without merit. I’m sure that’s what Google had intended with their reviews, but as it sits, it’s just too easy to sway that rating number. (Negative reviews are also popular among competitors wanting to try and smear each other.) Unfortunately with Google being such a popular search platform, it’s likely your customers may be swayed by a less-favorable review should you get one.

I would encourage you to ask each satisfied client to submit a review for you. (This does take a little work as Google won’t provide a direct link.) You could even provide them with a step-by-step guide to make posting a review easier. I would also recommend you have an in-house company protocol for dealing with people inconvenienced on the job whether those people are your client or your client’s clients – to help avoid a bad review. Unfortunately as in our case, it was a simple inconvenience that caused the problem. This is one of those problems that we didn’t even realize was an issue until it stared us in the face, and it’s a problem that can surely have an effect on all our small businesses.

Nick Howell, president of T & N Asphalt Services, Salt Lake City, UT, has been a regular presenter at National Pavement Expo since 2008 and a member of the Pavement Advisory Board since 2007. Let him know your thoughts on "From the Owner's Desk" at nick@tnasphaltservices.com.