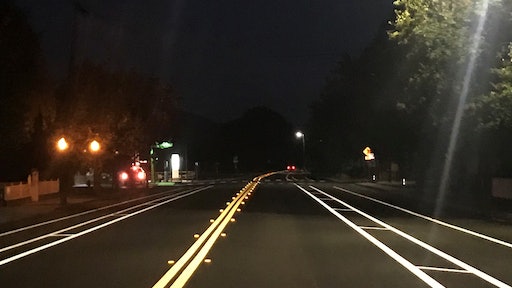 There is obviously a lot of excitement and even hype about the future of vehicle technologies to automate the task of driving.  And when you combine the vehicle automation progress with the potential of connectivity and the shared economy, there are significant signs of an innovation revolution in the transportation sector.

As the excitement and hype builds, so does pressure to get engaged and be part of the revolution.  One of the questions that many road agencies think about is, “What can we do to prepare our highways for this innovation—to help accelerate the benefits while not sacrificing the needs of human drivers in the mixed vehicle fleet era?”

While the question has been hard to answer with complete certainty, the best answer so far is also one of the simplest.  We’ve known since at least 2013 that the automotive industry has desired higher standards in terms of uniform applications and maintenance of pavement markings.

In 2013, Michael J. Robinson of General Motors testified before the House Committee on Transportation and Infrastructure Subcommittee on Highway and Transit saying that, “One of the key highway needs is to provide – at a minimum – clearly marked lanes and shoulders.”  In 2015, Elon Musk complained about low contrast markings in a tweet.

In 2016, Volvo’s North American CEO Lex Kerssemakers lost his cool as the automaker’s semi-autonomous prototype sporadically refused to drive itself during a press event at the Los Angeles Auto Show.  “It can’t find the lane markings!” Kerssemakers griped to Mayor Eric Garcetti, who was at the wheel.  “You need to paint the bloody roads here!”

Audi has now joined the group of unhappy automotive companies. In May 2018 Audi announced that their much-anticipated Level 3 technology (Traffic Jam Pilot on the 2019 Audi A8) will not be available in the United States because of several factors including legal and infrastructural.  On the infrastructure side, Audi points to road markings, signage, and road configurations that can vary significantly from state to state and region to region – rendering a single solution impractical if not impossible.

In January 2018, the Federal Highway Administration (FHWA) published 10 questions in the Federal Register with the intent to develop a better understanding of what was needed from the infrastructure side to support automated driving systems.  In May 2018, the FHWA summarized the top themes from the RFI, including, “Greater uniformity and quality in road markings and traffic control devices would enable automation. Having greater consistency in road markings and traffic control devices and an improved state of good repair benefits all road users, including ADS.”

This FHWA finding prompted action within the National Committee on Uniform Traffic Control Devices (NCUTCD), whose purpose is to assist the FHWA in the development of standards, guides and warrants for traffic control devices and practices used to regulate, warn and guide traffic on streets and highways.

The draft criteria are driven by the needs of the cameras and the software that are used to detect pavement markings.  The draft criteria include suggestions to improve uniformity such as dotted lane line extensions along exit ramps and chevron style markings in gore areas (neither of which are consistently practiced throughout the US).  They also include criteria to help the cameras (and humans) detect markings in otherwise challenging conditions such as worn markings, wet conditions, glare, etc. (the suggestions include standardizing the width of edge lines at 6-inches and standardizing the skip length of a broken line to 15 feet).

The point is that the highway infrastructure has evolved before (for the last 20 years there has been a push to accommodate older drivers) and will continue to evolve.  The next evolution might be the transition from the human driver to the machine driver.  But in the meantime, for the foreseeable future, there will be a mix of human drivers and machine drivers on the road.  The challenge will be to find areas where the highway infrastructure can evolve to assist the adoption of automated vehicle technologies while accommodating the needs of human drivers.

In October 2018, the U.S. DOT released their highly anticipated document, “Preparing for the Future of Transportation: Automated Vehicles 3.0 (AV3.0).”  This document introduces guiding principles and describes the U.S. DOT’s strategy to address existing barriers to safety innovation and progress (https://www.transportation.gov/av/3).  One of the most noteworthy items described in this document (as it relates to pavement markings) is that the FHWA will pursue an update to the 2009 Manual on Uniform Traffic Control Devices (MUTCD), taking into consideration the needs of automated vehicle technologies, “The U.S. DOT recognizes that the quality and uniformity of road markings … support safe and efficient driving by both human drivers and automated vehicles (pg. 11).”

The biggest challenge for the FHWA as they develop a new MUTCD is what to include that will demonstrate their intent to address the needs of automated vehicle technologies.  For road markings, there is likely to be subtle changes from current practices.  In other words, there will not be a significantly new requirement such as embedded microchips in road markings.  However, there may be changes such as 6-inch wide edge lines, and possibly adding minimum required pavement marking retroreflectivity levels (which has been a Congressional mandate since 1993 that FHWA is still trying to fully implement).  Changes likes these have been proven in multiple studies to be good for both the human driver and the machine driver.

Greg Driskell, ATSSA Board of Directors member and president of Professional Pavement Products, Inc., said when it comes to AVs and roadway infrastructure, it’s important to talk about the “hurdles” and what is most needed today and tomorrow.

“The most important infrastructure element on our roadway system for automated vehicles (AVs) and for Advanced Driver Assist Systems (ADAS), is pavement markings,” Driskell said. “There’s a significant and almost complete reliance on pavement markings for the automated vehicle technologies of today.  A lot of people think AVs mean the car drives down the road and you’re facing the other direction, working on your computer, but we have partial AVs on the road right now.  Honda, Cadillacs, Chevrolets, they all have these ADAS systems and they all depend heavily on being able to see that pavement marking.”

May 20th, 2020
Latest in Pavement Maintenance

When it comes to asphalt hotboxes there are several options on the market to choose from. Make sure you consider these 5 things before purchasing.
Jun 1st, 2021
Latest

As a dangerous heat wave rolls across the country this summer, construction workers need to be extra careful on the job site. Prepare yourself and your crew for the taxing days ahead.
Jessica Lombardo
Jul 17th, 2019

Pavement repair-only sales accounted for 19% total work completed by the contractors on the list, up from 17% last year.
Dormie Roberts
Jun 11th, 2021

This year we can make the assumption that the Striping 75 contractors are not growing as fast due to increasing paint prices and the rising cost of business
Dormie Roberts
Jun 11th, 2021

The paving-only top 75 list, still out paces in terms of sales, and makes up 62% of the total revenue between all segments lists.
Dormie Roberts
Jun 11th, 2021

Due to economic uncertainty the coronavirus pandemic had on the nation, we can speculate that customers were hesitant to spend large amounts of money to have their pavements replaced.
Dormie Roberts
Jun 11th, 2021

Cimline has created a new product line for customers that use prepackaged mastic as part of their pavement maintenance process.
Cimline Pavement Maintenance Group
Jun 10th, 2021

Being willing to try new technologies and processes will keep you ahead of your competition as work starts to pick up
Jessica Lombardo
Jun 9th, 2021

As vehicle travel has returned to near pre-pandemic patterns, transportation systems will require increased federal and state funding.
Dormie Roberts
May 27th, 2021

A spirit of camaraderie is common at National Pavement Expo, and it’s particularly helpful for many attendees.
Jun 1st, 2021

Training tools will have your team marching like a well-oiled machine and ready for defense and growth
NAPSA
May 31st, 2021

New AGC survey show over half of construction workers report vehicles have entered into their work zones.
Dormie Roberts
May 27th, 2021

You must not only take care of yourself, you must be more focused to ensure that everything you and your crew do to complete work, including driving, is done with the highest level of safety possible.
Brad Humphrey
May 27th, 2021

Carlson Paving, Heatec, RexCon, Roadtec, along with the other companies, will no longer operate as separate subsidiary companies and will all take on the Astec name.
Astec Industries Inc.
May 26th, 2021

When it comes to asphalt hotboxes there are several options on the market to choose from. Make sure you consider these 5 things before purchasing.
Jun 1st, 2021
Follow Us