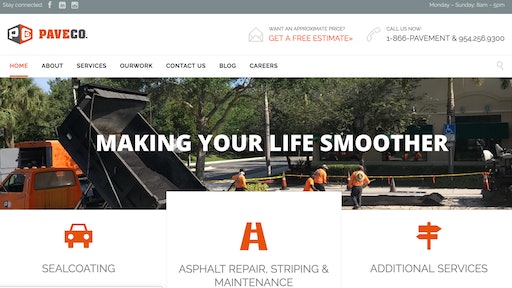 In addition to bringing control of the website in-house, PaveCo wanted its new site uncluttered and to look different from other paving industry websites.
Candidates for Pavement’s 2019 “Best of the Web” Award received more than 400 online votes, and candidates for the “Best Marketing Video” Award received more than 1,000 online votes. And in both cases PaveCo, with locations in Hollywood and Bonita Springs, FL, came out on top.

Started end of 2013, PaveCo employs 25 people and specializes in paving and pavement maintenance of parking lots from new construction to striping and sign installation. Owner Darin Whelan came from a commercial real estate background. When Darin couldn’t find a reliable or competent asphalt and concrete company for his client’s properties, he decided to open his own.

“It’s pretty amazing considering we started with a used sealcoating rig, dump trailer and an old pick-up truck,” Whelan says. “My friends in construction tell me this is unusual for a contractor but I didn’t know anything different and I didn’t know what normal is. Normal to me is what we’ve done.

“Like anything else you have to have the right people and I have some of the best people around me. That’s really why we’ve been successful.”

One of those people is Lulu McManus, who was hired to handle marketing for the company and who was the guiding force for PaveCo’s award-winning website and marketing video.

“The company had a website but it didn’t show what our company was. It got our point across but it looked like every other website that mentions paving and it really wasn’t anything that would catch your eye,” McManus says.

She says that first website was managed outside the company, and one of the first decisions PaveCo made was to bring control of the site in-house.

“Whenever I wanted to make a change or add photos it would take days to get the changes up on the site. It was slow so we decided we wanted to bring management of the site in-house so we could do all that ourselves... and that took a lot of learning.”

McManus had to learn the website world and she also had to learn some code writing, SEO and the WordPress program so she could help create the site and update it as needed. “I had to literally learn code but that’s been great because now we can change things whenever we want.”

Whelan and McManus say they had a game plan before they actually started the redesign. They had spent a lot of time looking at a lot of other websites, eliminating things they didn’t like and keeping track of things they liked.

“Darin told me to go to the Apple website and look at that site. It’s clean, there’s no clutter, it’s user friendly, it’s easy to move around in it. It doesn’t have any of that ‘We’re Number 1’ stuff on it because, first, you’re not, and second who says so? We feel we don’t need to brag in that way and we don’t think people make their buying decisions based on that kind of information.”

So they decided to unclutter their page.

One thing they wanted was a different approach to photos.

“Everyone posts beautiful pictures of their finished jobs and that’s great, but there’s more to the jobs than that,” McManus says. “How did the job get to that point? What people are behind the effort to get you that great parking lot and what other work did they do? Who are the people behind the job? We think that showing before, during and after the job makes it more real. It’s kind of hard to make asphalt interesting but it’s the people who are interesting and that’s the approach we’re taking.”

They also added a blog, testimonials and, most importantly, a call to action.

“When we designed it we were constantly asking ourselves how it looks and works on a phone because so much of people’s work is done on their phone these days,” Whelan says. “It was specially designed with phones in mind more than computers or even tablets.”

He says that the phone number was on the original website but users had to find it, highlight it, then call.

“With the new website, the call to action continually scrolls. No matter what page you’re on, the button with our phone number is displayed and ready to be pressed. You don’t have to search for the phone number.”

“It was redesigned with phones in mind, and it’s worked,” McManus says. “Our calls have increased exponentially. We keep pretty good track of how people find us and 90 percent say it‘s from Google and almost all of those found us on their phone.”

McManus describes the new site as “elegant looking” and easy to navigate. But is it effective?

“Once the site was up analytics jumped from 200 or so visitors a month to more than 1,200 regularly and as much as 1,800 one month,” she says. “And that’s without paying for any Search Engine Optimization advertising or AdWords.”

McManus says that based on her research, PaveCo selected their own SEO words. “We just use a lot of the words we think people will be searching for in the site and that helps us get the response we want. You don’t have to pay for SEO to get that response, but you do have to learn how it works and then put the right words in there,” she says. “We’ve done this completely organically. We haven’t paid a dime for any Google ads or any online advertising.”

PaveCo started redevelopment of its website in late 2017 and it took three months before McManus was comfortable enough to have it completely replace the old site. The new Paveco.com went live in spring 2018.

PaveCo’s “Best Marketing Video” came about almost by accident, which makes its wild success that much more amazing.

“We’ve done a couple of marketing videos but hadn’t done a lot,” McManus says. “We post them on Instagram but they are just videos of jobs we’re working on. Nothing is planned or edited.”

This “Best Marketing Video” started off the same way.

“I happened to take a close-up of squeegeeing sealer on a parking lot and posted it on Instagram. After two weeks it had 10 million views and had been shared over 150 times,” McManus says.

As it turned out, Insider.com had discovered and picked up the video and that boosted it.

“We’re still kind of puzzled about why that happened but it did.”

Then Insider.com called and asked if PaveCo had any more videos like that.

“They reached out because of interest in the squeegee video and asked if we could put something together that showcased our business,” she says.

Since they had been collecting on-the-job videos for a while they took a look at their clips and put a number of them together to tell a sealcoating story. They put some music behind the pictures and some words over the pictures and sent it to Insider.com who then blasted it to all of their media platforms, as did PaveCo.

“There wasn’t really a plan for a marketing video, we just put something together that shows what we do. Then, like the squeegee clip, this sealcoating video went viral, too. It was just one of those things,” McManus says.

That first squeegee segment went viral in April 2017. McManus says that by late May PaveCo had the marketing video posted on Instagram and at insider.com and within five hours it had 500,000 views.

“Today people don’t want long things, they want short clips they can view quickly,” she says. “We figure we have three seconds to get someone’s attention so we wanted to start it with a bang that gets their attention right from the start.”

McManus says they don’t post the video on their website because it makes the site run slower, but they’ve posted it on LinkedIn and on Instagram and Facebook. “I bring it back once in a while and it still gets insane traction,” she says.

“It brings people in and it even brings people in who might not even be looking to pave or sealcoat. I can’t tell you how many times people have commented on the video and said ‘please, please do that to my parking lot’ after seeing the video.”

Whelan says the video helps with name recognition and branding. “People recognize the name and it provides instant credibility and a comfort level for people. The phone definitely rings a lot more now,” Whelan says.

“We’re in a business where not every day someone is going to pave their parking lot. So in the meantime if we can just blast our name so that when they trip in a pothole and realize they need to pave they always think, ‘PaveCo’.”

“What’s your message? What do you want to say? You need to decide that first,” Lulu McManus says. “Then comes the look. And to get the look you want, you need to spend a lot of time looking at other websites.

"Best of the Web" Runners Up

How to create perceived value in your construction company