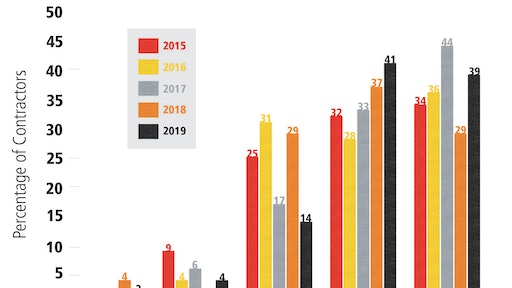 Just for historical purposes (and not for direct comparison), the sealcoating-only sales totals for the last few years when the list included 75 companies was $171 million in 2018, $201 million in 2016, and $249 million in 2015. We have consistently noted that the high-volume years of 2015 and 2016 likely are the result of pent-up demand and that sealcoating-only totals are settling into a more “normal” level since then.

Sealcoating-only sales represent 14% of total Sealcoating 50, up slightly from 13% in 2017 (50 companies), the same percentage of last year’s list and down from 15% in 2016. The remaining sales represent a broad mix of pavement maintenance-related work, including:

Despite the fact the sealcoating-only sales volume brings up the rear of the four industry segments, that doesn’t mean sealcoating has to be less profitable than the other segments.