Federal Signal buys niche market leaders, and '“MRL has had a primary focus on the private contractor segment, commanding the No. 1 position in terms of market share' 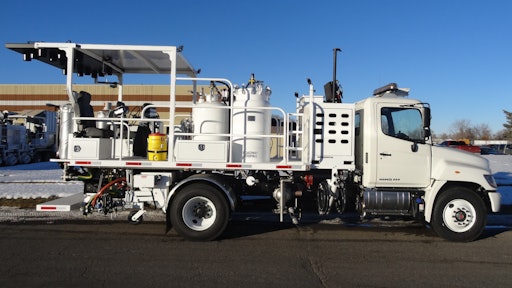 Among the equipment MRL manufactures is the 1-120AA highway Paint Truck.

Federal Signal, Oakbrook, IL, the parent company of Elgin Sweeper, had just signed an agreement to acquire the assets and operations of Mark Rite Lines Equipment Company, a manufacturer of truck-mounted and ride-on road-marking equipment. The $55 million acquisition includes the operations of HighMark Traffic Services Inc., a wholly owned subsidiary of MRL, which provides road-marking services, primarily within Montana.

“As an industry leader, MRL designs, manufactures and sells a range of innovative products and customer-driven solutions for road marking application, line removal and pavement grooving. Over the last few decades MRL has established itself as an industry leader and innovator, providing its customers with a one-stop shop solution, offering a wide range of products coupled with outstanding training, customer service and aftermarket support.

“We target companies that are market leaders in a niche market and MRL is just that,” Sherman said. “Historically MRL has had a primary focus on the private contractor segment of this market, commanding the number one position in terms of market share.

MRL, Billings, MT, employs approximately 250 people; employees and the current management team are expected to remain with the company.

"MRL has had a great run over the last several years, and we are thrilled to be combining forces with the best partner to fuel the next phase of our growth," said Jim Spielman, president and general manager of MRL. "We believe there is tremendous opportunity to leverage Federal Signal's distribution network and develop best-in-class manufacturing practices to realize further operational improvements, so that we can serve our customers even more effectively and competitively."

MRL’s portfolio of road marking equipment consists of truck-mounted vehicles and self-propelled ride-on application solutions which utilize a broad array of materials including thermoplastics, paint and epoxy. In addition, MRL manufactures a series of trucks for mechanical line-removing and high-speed pavement grooving.

“The acquisition represents a natural and strategic extension of our market position as a specialty vehicle manufacturer serving maintenance and infrastructure markets. It also allows us to further diversify our revenue streams and end market exposures as we seek to mute the impact of market cyclicality," Sherman said.

"MRL gives us an opportunity to leverage our expertise in building chassis-based vehicles… [and] utilize our existing distribution channels and aftermarket platform to accelerate MRL's growth. MRL has a clear leadership position in its markets and an experienced management team that I am confident will flourish as part of Federal Signal."

Sherman said MRL also has an attractive aftermarket business consisting of parts sales and service, representing as much as 25% of MRL revenue. She said Federal Signal’s recent expansion of service centers throughout North America will enable to company to capitalize on MRL’s aftermarket business and grow it.”

Sherman estimated the overall market for road marking equipment in the United States to be $200 million and said the acquisition positions MRL and Federal Signal to take advantage of some “tailwinds” expected to drive growth in the road marking industry.

"With the need to invest in aging infrastructure and the anticipated need for road-marking changes to support the future evolution of connected and autonomous vehicles, these are exciting times in the road-marking industry,” Sherman said.

She said the United States has roughly 9 million road miles, two-thirds of which are paved, requiring pavement marking.

“The recurring nature of spending and the continuous demand for road markings given their importance to the country’s transportation infrastructure, adding stability to MRL’s revenue base and has enabled MRL to be relatively resilient to previous economic downturns.”

“Decades of underinvestment in infrastructure has led to deteriorating and often dangerous road conditions. Infrastructure investment is critical to the safety of our citizens and the well-being of everyone as evident by the recent bipartisan support of a $2 trillion spending bill to overhaul U.S. infrastructure,” she said. “Road markings will continue to play a pivotal role in our roads and highway system for years to come.