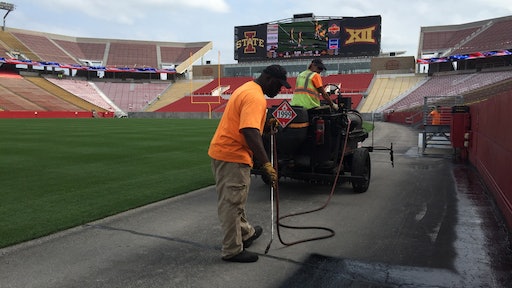 Sprayed on the pavement, gilsonite-based sealer is a chemically engineered asphalt preservation product comprised of a cationic emulsion with a modified sealer-binder, rejuvenators and specially selected plasticizers.

Asphalt preservation is like changing the oil in a car. If it’s done at regularly scheduled intervals with the recommended oil blend, it will considerably extend the vehicle’s life.

The same holds true with pavement. Preventative maintenance, with the right treatment at the right time, is a proactive strategy employed to maximize the benefit and extend the life of good pavement for as long as possible. A strategic preservation plan can mean the difference between extending the life of this valuable asset or having it prematurely fall into disrepair.

A Shift in Mindset

Although pavement maintenance is not a new concept and is seemingly straightforward, it is not as simple as it sounds. Proactive maintenance necessitates a shift in the way  people think about pavement. It requires commitment to taking care of the good pavement along the way, and not just reacting to neglected or damaged pavement.

Too much money is spent on patching pavements in parking lots, roads and runways. This is a very costly, reactive approach. Instead of patching and replacing asphalt pavements, being proactive – taking care of pavement that is still in good shape – is a much more cost-effective approach. To put it in perspective, studies, including the U.S Department of Transportation’s “A Pocket Guide to Asphalt Pavement Preservation,” show that every additional dollar spent on preventative maintenance treatments saves up to $10 in future rehabilitation costs.

The Facilities Planning & Management Department at Iowa State University is responsible for the pavement throughout the campus, including Jack Trice Stadium. The department has been proactive in protecting the school’s investment and making it last. Looking for a way to maintain and extend the life of the valuable pavement around the stadium, the university works with Gee Asphalt Systems, Cedar Rapids, IA. The contractor works across the United States with airports, highways and Fortune 500 companies, helping to preserve their valuable pavements.

Over the years, and after assessing an array of pavement around the stadium in varying conditions, Gee Asphalt has helped to develop a pavement preservation plan for the university. The plan is to reseal the pavement with gilsonite sealer-binder (GSB) every four to five years, as well as sealing cracks in the parking lots surrounding the stadium.

The original pavement around Iowa State’s Jack Trice Stadium may be in its final stages of useful life – after all, it is nearly 45 years old, dating back to October 1973 when groundbreaking began for the stadium. A well-designed, well-built and well-maintained asphalt parking lot has a typical life expectancy between 15 to 30 years; but oxidation is active immediately, and it can begin deteriorating the pavement in as few as five to seven years without preventative maintenance. The age of this stadium’s pavement is unusual, however, thanks to regular, scheduled pavement preservation efforts every four to five years.

Iowa State has continued to add new parking sections as the facilities have grown and developed throughout the years. As new pavement is laid, Gee Asphalt works with the facilities management team to examine and assess the different pavements, identify why some are in better condition than others, and create a plan to preserve the pavement in the best condition possible.

Pavement failure may be simply due to age. Alternatively, the pavement may have been installed on a poor base, or it may have been affected by water issues underneath the ground where it was laid. Understanding the “why” is vital when developing a pavement preservation plan.

For example, if a newer pavement – i.e., less than five years old – has cracks and rutting, using a GSB product won’t help correct any of these problems. A gilsonite sealer is a tool used to help delay the aging process and slow oxidation on good pavement.

The same is true if shortcuts were taken with base prep or grading. A roadway is only as good as its base and prep. Gilsonite isn’t a magic wand. It won’t patch or repair potholes, but it does help prevent them.

During the summer of 2018, Gee Asphalt sealed several parking lots north of the Iowa State campus using GSB-88, produced by Asphalt Systems Inc. In Summer 2019, an additional 24 pavements are slated to be sealed on campus, including the parking areas around student housing, the veterinary medicine building and sections of Jack Trice Stadium. By rotating to a new location each year, the pavement being sealed is kept on a regular, prescribed cycle to protect it.

Jon Klein is a sales and marketing manager and project estimator with Gee Asphalt Systems Inc., a Cedar Rapids, Iowa-based pavement preservation contractor. He evaluates large formats of pavement – such as county highways, city streets, airports and parking for Fortune 500 companies – and creates proposals for preventative maintenance strategies. He may be reached at jklein@geeasphalt.com.

Gilsonite at a Glance

Here’s a quick look at the gilsonite-based emulsified asphalt sealer Iowa State University uses to preserve the asphalt pavement around its football stadium.