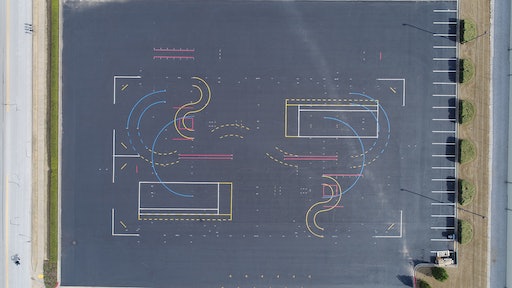 Layout of the training area started with marking the four corners of the 30,000-sq.-ft. area, creating the outlines of a rectangle. Bolts were screwed into the pavement at the four spots, and the four points were connected by a nylon baling cable, creating the outlines of a rectangle. This long sides of the rectangle served as reference points to help position markings within the test track.

With 25 years’ experience in pavement marking, Kevin Allford had never encountered a job like he faced last year at Pig Trail Harley-Davidson in Rogers, AR. Allford, pavement maintenance foreman at Dallas-based Pavecon, worked with a crew of three and Pavecon project manager Alex Wegner to layout and stripe a motorcycle training course for the motorcycle dealership.

“This was such an interesting and challenging project,” Allford says. “It was an unusual striping job because it consisted mainly of stencils with a few curved paths. It’s not a typical job for striping by any means.

“Usually we’re striping parking lots or streets and those jobs are really just the same thing but in different places, but this was new altogether. There was a little bit of a learning curve because we’ve never done anything like this before in all my years of striping, so it was neat to see it all come together.”

Pavecon got the unique job after the contractor had reached out to Pig Trail to do some pavement repairs on its 40,000-sq.-ft. parking lot. The contractor has 1,300 employees at seven locations in six states and provides a full range of paving and pavement maintenance services throughout the south-central United States.

“During the discussions about the repairs we learned they were looking to have this track striped onto the lot,” Wegner says. “Once we learned about it and talked with them everything kind of fell into place that we were a perfect fit for the job. We have the experience and ability to do this kind of work. It’s not something every striping contractor can do. It requires absolute precision because of the state certification requirements.”

Because of limited space, the test track needed to be laid out and striped to contain several different courses within the same 30,000-sq.-ft. area, which is within a 40,000-sq.-ft. pavement outside the dealership. Markings and stencil icons were color-coded and numbered so instructors could easily set up the different courses.

“With this layout, which is complicated, they can use the area for multiple exercises and training for different types of bikes,” Wegner says.

Enter Keith Poor, of the engineering firm working on the job. Allford says Poor was the mastermind behind overlaying all the different training courses in the 30,000-sq.-ft. area. Using a combination of four colors (red, blue, yellow, white), symbols (yellow squares, white circles, blue triangles), and numbers, Poor designed a plan so everything fit together, and he designed the custom stencils for the job.

“He had a huge book with all the plans in it,” Allford says. “We met him and he asked some questions of us because he knew where the stencils had to go and how to fit it all in the area, but he didn’t know how to position them on the pavement and how to lay it all out. We talked with him and it became clear that this was something we could do for them.”

Pavecon’s challenge was to place each of the stencils in the precise location on the pavement. If the location of any stencils was off by even a small amount, the state would not certify the track as an acceptable training facility. And an incorrect location could also affect whether a driver being trained passed the training.

“When they take the training, the drivers have to hit the brakes, for example, and stop within a certain distance,” Wegner says. “The stencils mark those locations, so they have to be positioned exactly on the pavement to the inch. If the drivers can’t stop within the appropriate distance, they have to keep doing it over again until they get it right.”

To start the layout, Poor identified and located four points within the 40,000-sq.-ft. pavement. At each point bolts were screwed into the pavement. Those bolts were the four corners of a rectangular-shaped space and served as reference points to help position the stencils. The four points were then connected by nylon baling cable pulled tight, creating the outlines of the 30,000-sq.-ft. rectangular space.

“The exterior of the rectangle was pulled extremely tight to assure the measurements within it were going to be precise,” Allford says. “Everything was set up off of those four points, and that’s how we plotted the location of each stencil.”

“The slides were connected to the long sides of the rectangle and easily slid up and down,” Allford says. “The slide functioned almost like a T-square. It was a bit like the game Battleship.”

Once both sides were the same, they had the horizontal line they needed. The metal plates had a place where a crew member could stand to make sure the cable was pulled as tight as possible through the middle of the rectangle. They then measured and marked along that cable the location of each stencil, again based on Poor’s layout plan.

They repeated the process until all stencil locations were marked, a process that took the entire first day.

On the second day Pavecon’s four-person striping crew, led by James Braden, striped two colors and the related symbols. They striped white and yellow the first day, then striped red and blue on the third and final day on the job.

“There were locations throughout the course where the colors overlapped so we figured that out in advance and decided which colors to paint first. There were a number of areas where we had four colors coming together, so we had to have them come together in layers. We needed to make sure we had the order right,” Allford says.

Now that they have one of these condensed motorcycle training courses under their belt, Pavecon plans to stripe additional courses for other Harley-Davidson locations. “They’ll all be customized for each store because the pavements will all be different,” Wegner says. “They’re all the same concept but each dealership is unique in what it needs.”

“Alex, Kevin, and the entire crew did a fantastic job on this project,” says Ben Shankle, Pavecon division president, Northwest Arkansas. “ While this type of project is certainly not the norm, Alex and Kevin jumped right in to help our customer come up with a solution for this complex project. I love to see our people living out one of Pavecon’s core values of Value Creation. We strive to exceed our customers’ expectations in all aspects of the work. This is a great example of where our people rise to occasion, setting Pavecon apart from the competition.”

A02 “Basic Parking Lot Layout and Striping Machine Basics,” presented by Jim Panzenhagen, JMP Excelsior Services, will “start from scratch on how to layout a parking lot, from squaring up the lot and finding a control line, to laying out the standard and handicap parking spaces.”

A06 “Improve Striping Productivity Using Today’s Technology (Auto Layout and Laser Systems),” presented by Scott Langton, Sir Lines-A-Lot, and Chad Jung, Preferred Striping Inc. “This how-to session will take you through ‘the evolution of parking lot layout’ from basic tape measure layout to today's simple-to-use auto layout technology that will do your calculations for you and the industry’s newest cutting-edge auto layout tool: lasers. More lines faster is the goal and you’ll learn how to improve productivity using today’s technology. Videos will be shown!”

A07 “Thermoplastic Pavement Markings & Durable Marking Paint Alternatives,” presented by Kurt Gruenberg, Rae Products, will “focus on both Extruded and Preformed hot-applied thermoplastic marking materials, as well as durable liquid marking paints. In addition to learning basics such as equipment, installation, longevity and pricing, you'll get a short overview of other durable liquid marking materials.”

B04 “What You Need to Know about ADA Compliant Striping and Signage,” presented by Michael Byrd, Midwest PLM, “will teach you the laws of ADA compliancy for parking.  You will learn who needs to be compliant, what it takes to become compliant, and who is exempt.”

D02 “Ins and Outs of Auto Layout and Striping Tips,” presented by Jim Panzenhagen, JMP Excelsior Services, “will discuss and show how to use the Graco Auto Layout machine—from measuring the parking lots, calculating parking space, and installing the premarks—from start to finish. The presenter will also share some tricks and tips for using the auto layout and parking lot striping.”

For complete conference schedule and to register visit www.nationalpavementexpo.com.

How to Clean Your Line-Striping Machine