How, When – and If – You Should Rake Longitudinal Joints 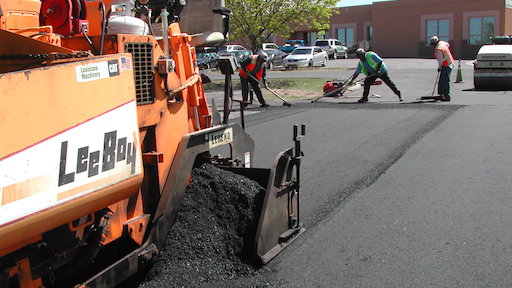 If the proper amount of mix is placed in the proper place, no raking of the mix at the longitudinal joint is necessary.

First things first: You shouldn’t need to rake the hot mix asphalt you place. If you follow proper paving procedures, the amount of mix you’ll leave at the longitudinal joint will be within an acceptable range that enables proper compaction and makes it easier for the roller operator to achieve proper density.

“If you’re paving a second lane and the paver operator places the correct amount of new material over the first lane do not move the material. Leave it there!” says John Ball, Top Quality Paving. “Put the right amount of material in the right spot and leave it alone.”

Jim Scherocman, consulting engineer, agrees that if the proper amount of mix is placed in the proper place, no raking of the mix at the longitudinal joint is necessary. In fact, Scherocman says that virtually any raking done makes it less likely the roller operator will be able to achieve the necessary density, and the result will be premature failure of the joint.

If the proper amount of mix is placed overlapping the longitudinal joint, raking is unnecessary. Scherocman says two factors need to be considered when determining the overlap of the screed’s end or edger plate over the edge of lane 1 when placing mix for lane 2. First is the thickness of the uncompacted mix from lane 2 over the top of the compacted mix at the edge of lane 1. Second is the width of the overlap of the mix from lane 2 over the top of lane 1.

“When mix from lane 2 is placed over the top of the compacted mix on lane 1, the mix needs to be higher by the amount of compaction that will occur,” Scherocman says.

The width of overlap of mix from lane 2 onto lane 1 is also critical. “If an excessive amount of mix is placed over the edge of lane 1, it will have to be removed by raking the joint or it will be crushed by the rollers,” Scherocman says. “If not enough mix is placed over the edge of the first lane, a depression or dip will occur on the lane 2 side of the longitudinal joint. In either case, the joint will not perform properly.”

“If the overlap is too much and you push the material from the compacted first lane to the uncompacted second lane, you don’t have enough material at the joint in the second lane to get density at the joint,” Ball says. “Failure will result.”

Scherocman recommends a “best practice” of placing the overlap in the range of 1 to 1-1/2 in. wide to avoid raking (and for proper longitudinal joint construction).

Scherocman says that if too much mix is placed over the top of lane 1– if the paver operator didn’t do a good job, in other words, and the mix is too thick – the excess material should be removed with a shovel, moving longitudinally along the joint, instead of pushing or raking the material transversely across the joint.

“That’s not how most people do it because it’s not convenient,” Scherocman says. “The easy way and the most convenient way is to broadcast the excess mix across the uncompacted mat, but that’s incorrect also.”

He says the excess material should be considered waste and should be removed and recycled.

If raking is required, it’s essential that enough mix is left at the joint to facilitate compaction.

“The problem is, the raker often rakes the joint flat, meaning the compacted first lane is equal in height to the uncompacted second lane,” Ball says. “If you rake the joint flat there isn’t anything for the roller to compact because the raker has pushed all the material away from the joint.”

Scherocman says the raking process almost always results in the mix being too low at the joint on the lane 2 side.

In addition, by broadcasting the excess mix across the uncompacted mat you’re creating mat problems because that mix hasn’t been set in the mat by the paver; it’s sitting on top of a mat that’s been partially compacted by the paver’s screed and, depending on the amount and gradation of the mix, might not become part of the mat even after compaction.

Scherocman says if raking is absolutely necessary, the excess material should be raked onto the compacted mat, then removed and recycled.

“The bottom line is, you don’t need to rake the joint at all if you put the right amount of material in the right spot,” Scherocman says.

“Often rakers rake because they’re told to rake and they don’t want to be seen doing nothing. But sometimes the best thing a raker can do is stand there,” Ball says.

Should You “Bump the Joint”?

Jim Scherocman says that sometimes a raker will attempt to “bump the joint” with the rake. That means the mix in the overlap of lane 2 on lane 1 is not pushed over the top of lane 2 but merely “humped up” at the joint.

“If the new mix is at the proper height, the extra material right at the joint will have no place to go vertically.  This will result in a bump or ridge along the joint,” Scherocman says. “The rollers will then have a tendency to ride on the ridge of extra mix and not be able to properly compact the hot mix immediately adjacent to the ridge.”

Raking Can Cause Raveling

Jim Scherocman says that if raveling occurs at the longitudinal joint, it is most often caused by the raking of the joint and the transverse movement of mix needed at the joint into the interior of the second lane.  Raveling typically occurs due to a lack of material to be compacted.

Constructing a Joint on a Milled Edge

When you mill an existing asphalt concrete pavement surface, a vertical face is formed along the edge of the cutting head on the milling machine. “This is significantly different than the slope that is formed by the edger plate on the paver screed,” says Jim Scherocman, consulting engineer. “In this case, due to the vertical edge of the adjacent lane of compacted mix, the amount of overlap must be controlled very carefully.”

He recommends the amount of overlap of mix from lane 2 over the non-milled surface should be only 1/4 to 1/2 in. – as opposed to the 1 to 1-1/2 in. overlap recommended when paving against a screed-constructed edge. In addition, no raking should be done.

John Ball says a rake that has straight teeth is preferred to curved teeth. “If the rake has curved teeth the asphalt builds up and it’s difficult to release it from the tines,” Ball says. “And rakes with longer teeth are better as they dig in easier and make it easier to work and move the mix.”