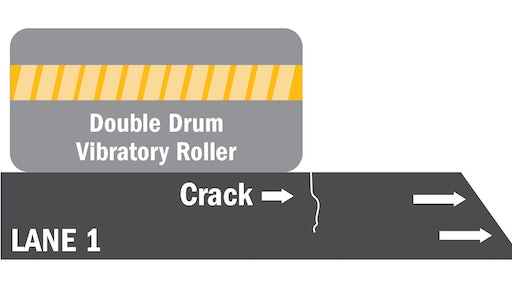 The first step in proper construction of longitudinal joints in asphalt paving is compaction of the unsupported edge of the first lane of paving. When the hot mix asphalt is placed by the paver it will have an unsupported edge that will have a slope. This slope will usually be about 60 degrees but that depends on the type of end or edge plate on the paver screed. Due to its shape and position this wedge does not receive the same amount of compaction as the flat part of the mat.

Whether constructing an asphalt pavement parking lot, road or even a driveway, it’s essential to properly compact each unsupported edge without shoving the mix sideways. That means a pneumatic (rubber-tire) roller should not be used to compact the edge at this stage. However, a steel wheel roller in vibratory mode can be used effectively.

There are three possible options for the steel wheel roller:

The key is to not be in positions #1 or #2 because using a roller in those positions tends to push the mix sideways – transversely – and you don’t get the compaction you should when you the mix is moving sideways. The best position is #3 where you are “compacting” 6 in. of air.

If the edge of the steel wheel roller drum is inside the unsupported edge of the pavement lane (Figure 1), several problems might occur.

First, the mix has a tendency to widen out – to move in a transverse direction.  This is due to the shear loading on the mix at the edge of the steel drum. How much the material moves depends on the properties of the asphalt concrete mixture – a tender mix will shove or move more than will a stiff mixture.