Uncovering a New Use for Infrared Pavement Equipment 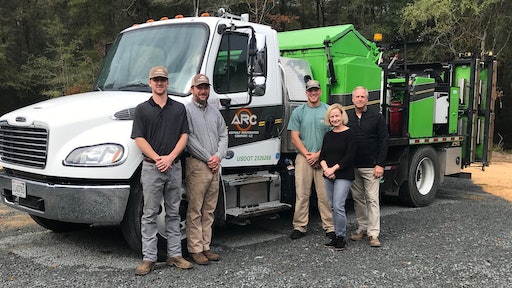 As infrared pavement repair has become more commonplace, more and more uses have been discovered for this pavement repair process. Where the infrared process was once touted just to repair potholes (assuming no base failure), contractors throughout the country continue to find new uses including repairing minor defects in newly paved asphalt pavement, repairing utility cuts, and leveling asphalt around storm drains and manholes.

“That was a pretty unique job,” says Asphalt Restoration Co.’s Miller Spivey. “We were pretty stoked about it and we talked with other contractors who said they’d never heard of anybody trying to use infrared that way.”

Spivey graduated high school in 2011 and while attending community college, worked part time on an asphalt crew doing infrared repair. By 2014 he and his father, Mike, decided they wanted to start their own infrared repair company – one of the few in Alabama.

“We understood the infrared repair process and thought it was time to bring a different approach to traditional pothole repair to this area,” Spivey says. “The traditional approach used most often around here is to just throw some cold mix into a pothole and compact it by driving over it with tires and then come back and do the same thing a few weeks later. Infrared provides a clean patch. The edges are sharp and when you drive over a uniform patch that’s done right it’s smooth, there’s no bump and the joints are tight and flat.”

So, five years ago Spivey’s aunt and uncle, Allison and Scott Becraft, invested in the company and Asphalt Restoration bought their first infrared unit, a Freightliner truck equipped with HDE infrared equipment that was assembled and installed by Matt Kieswetter out of Kitchener, Canada, a 3-ton hot box and room for tools and rollers. “Everything you could possibly need is on the truck and if there’s no base failure you can get a really nice repair quickly,” he says.

Spivey and his father run the day-to-day operations of Asphalt Restoration. They both handle sales, estimating, bidding and doing the work in the field while Allison Becraft handles the books. Spivey says most of their work is repairing utility cuts, and potholes, but they also do a good amount of business constructing infrared patches on parking lots, and they are a subcontractor for sealcoaters who want areas of pavement repaired before they seal and stripe a parking lot. In addition, 15% of their work is for paving contractors.

“We work with a group of paving companies here in town and if they have a job they just completed that’s holding water – bird baths are probably the main issue -- we can go out there, heat it up, level it out, tie it back in with the existing asphalt and it looks just like new,” Spivey says. “They also use us when they’re paving a parking lot, for example, if they’ve got a cold joint they have to deal with. If it’s cold out or if it’s rained and that joint has started to unravel, they call us, and we go in and heat that joint up and roll it out where it is smooth and sealed up tight. That way water doesn’t enter the joint, which would cause problems down the road for the entire parking lot.”

Discovering a New Use for Infrared Machines

The job removing several inches of asphalt over old bricks was a demonstration in Athens, AL. Some local people thought that returning the town square to its former brick pavement would make it a destination and would attract visitors and generate shopping dollars. The city was certain there were bricks beneath the asphalt – the question was how to expose them.

“We got a call asking if we could come down and talk with the city and do a demonstration of how we could use our infrared machine to uncover bricks in a city street. So, we rescheduled some things and headed to Athens,” Spivey says.

The area the city had chosen for the test was a two-lane street, and city officials and public works directors were gathered around to watch the process. Spivey says that over much of the area the pavement was 2 in. thick and that was heated in 10-12 minutes. In other areas, however, the pavement was more than 5 in. thick and that took longer to heat, slowing the process.

“We treated it just like any infrared job,” Spivey says. “We pulled up and started heating one section at a time. When that section was heated, we moved the truck and heated the next section while we worked on the heated area.”

But instead of following the normal infrared process – scarifying the patch, adding fresh or recycled mix as needed, spraying a rejuvenator and recompacting it – they shoveled the heated asphalt pavement off the area, exposing the brick.

“We just stuck the shovel under the asphalt all the way to the brick and pulled the heated pavement out,” he says. “Those areas that were 5 or 6 inches thick actually came up easier once they were heated than the 2-inch-thick areas. That’s because for some reason the 2-inch areas had a tack coat where the thicker areas didn’t. The areas that had a tack coat applied to the bricks made it a little more difficult to remove the hot mix.”

Spivey says milling was considered but there was concern because no one was certain how thick the asphalt was and people were afraid the mill could damage the bricks, defeating the purpose of the whole project.

“Initially, they considered milling the old asphalt off the bricks but were concerned that the milling machine would scratch up and damage the bricks. The bricks were in great shape. Removing the asphalt from the bricks with a shovel didn’t do any harm to them whatsoever,” Spivey says. “However, it would have been ideal to have a skid-steer on hand to help speed the process up, even that wouldn’t have damaged the bricks. Those were tough old bricks. They don’t make them like they used to. It only took us 90 minutes to demonstrate the infrared process to them. After seeing how easily it was to remove the asphalt from the bricks, it had their minds racing.”

A Small but Growing Contractor

At this point Asphalt Restorations is an infrared repair-focused company. Spivey says they handle small concrete jobs themselves but sub out sealcoating, cracksealing, striping, and most paving.

“There seems to be a higher demand for paving around here than there is for patching work, so we’ve got to have several different niches to grow. We have built good relationships with many different paving contractors whom we sub larger scale paving jobs to and they do the same for us with the calls they receive about smaller jobs.”

They recently acquired a small paver and in late 2019 completed their first small paving job.

“We’re trying to start doing a little more paving without stepping on the toes of other paving contractors who give us work,” Spivey says. “But we wouldn’t compete with them; we’d just do small patches and driveways,” Spivey says. “We’re finally growing a little bit. We’re still pretty small but we’re making it.”

Spivey says that Athens officials haven’t decided if the city will pursue uncovering all the bricks – it would be a costly process and some of the bricks would need to be cleaned of their tack  -- but Spivey says the demonstration provided another example of the variety of uses to which they can put their infrared unit.

And that, he says, is just part of the process of a small, young company trying to carve out its niche.

Miller Spivey says much of the work they’ve done since starting Asphalt Restorations five years ago has been trying to educate potential customers about the infrared process.

He says their most effective educational tool has been setting up demonstrations, much like the one they did in Athens, AL. They have a contract with Tupelo, MS, that Spivey says took a while to get. He says they were persistent with emails and phone calls and the deal was sealed once the city allowed them to demonstrate the infrared pavement repair process.

“A demonstration really shows what infrared can do and how it’s done. People watch us and they really are amazed and it’s easy to understand once someone sees it done in person,” he says. “Many people, and municipalities need our infrared services; they just don’t know that they need it.”

The Infrared Process Regains its Reputation

A state-of-the-industry: Infrared Equipment and Technology.