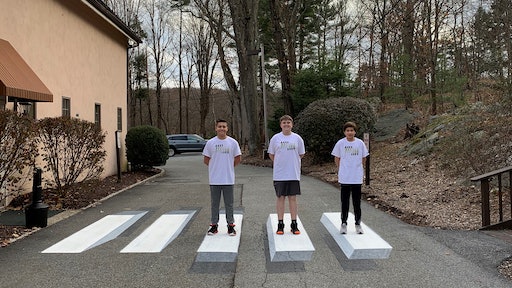 The three student designers are (from left) Ryan Winters, George Gillen and Dillon Fleksher. As part of their contest entry, they conducted an online pedestrian safety survey (https://www.surveymonkey.com/r/NGQW3F3), which is open through mid-February for anyone interested in taking it.

In May 2018, Pavement Maintenance & Reconstruction published a step-by-step “how to” article outlining a method to stripe crosswalks that appear three dimensional to approaching drivers. The idea is that drivers are likely to slow down when faced with a three-dimensional object.

The article was based on an approach by Gautur Ívar Halldórsson, co-owner of GĺH Vegamálun, a striping company in northwest Iceland, and he was instrumental in working through the steps with Pavement to make sure we conveyed the process correctly.

It seems to have worked as three enterprising 14-year-old students from the Smoke Rise gated community in Kinnelon, NJ, decided to tackle their own 3D crosswalk. With guidance from their team advisor, Jemi Gillen-Ruth, and assistance from V & V Line Striping, Boonton, NJ, they completed the project in November.

The brainchild of high-schoolers Dillon Fleksher, George Gillen and Ryan Winters, the crosswalk has been entered in eCybermission, a national scientific method/engineering competition that focuses on students solving community issues using science or engineering principles. Entries will be judged in March.

Gillen-Ruth says the boys have known each other since middle school. This year Dillon and Ryan attend Kinnelon High School, and George attends the Environmental Science Academy at Morris County School of Technology at Jefferson Township High School.

“The boys don’t see each other as much as they did in middle school, ” Gillen-Ruth says. “The team was formed so they could hang out — and they all want to work on a community project that will put them in contention for the  national prize of $9,000 in savings bonds per student.”

Gillen-Ruth says the boys had several ideas for a project and eventually decided to do something to make streets in the town safer.

“Kinnelon is suburban bordering on rural. We don’t have many sidewalks and many people complain on social media that pedestrians, joggers, and dog walkers never have a safe place to walk and drivers are too fast,” Gillen-Ruth says. “We stumbled across an image of a 3D crosswalk in Iceland and the boys thought it looked different and innovative and something that would stand out for drivers to see pedestrians crossing the streets.”

The team decided to propose a 3D crosswalk to be painted in front of the Smoke Rise Inn restaurant. Gillen-Ruth says the road in front curves and despite posted signage is dangerous for pedestrians walking from the front parking lot to the Inn.

Because Smoke Rise is a private community, all roads are considered private and the boys learned that state or national road marking laws do not apply. They asked John Ruckstuhl, president of the Smoke Rise Board of Governors, what he thought about the idea. “He was enthusiastic about it and said he would endorse it as long as the town’s safety officer approved,” Gillen-Ruth says.

The team contacted the town safety officer, who said past attempts to make the particular road safer hadn’t had much success.  He had no objection to the 3D crosswalk if the Smoke Rise engineer signed off.  The team shared their plan with the Smoke Rise engineer, Tom Donoghue, Donoghue Engineering, who said he was familiar with 3D crosswalks. Tom in turn reviewed the concept with the Kinnelon borough engineer.

Gillen-Ruth says that the two engineers consulted state and local regulations and determined that in New Jersey, 3D crosswalks are not recommended for public roads “because the few studies that are out there show that some drivers may swerve to avoid the crosswalk and it may cause more accidents than it prevents.”

Ultimately the engineers agreed that they preferred the crosswalk be installed on the short road behind the restaurant “to see how it worked before putting it on a busier road in front of the Inn.”

“The short road behind the Inn connects the back door to the rear parking lot. Cars are already driving slowly and while it wasn’t what we originally wanted, it was still a yes, so we took it,” Gillen-Ruth says. “The rear road had no markings for pedestrians, so it was ideal to create a safer area for restaurant patrons.”

The team submitted the crosswalk plans to the Smoke Rise engineer, then put together a PowerPoint presentation for the homeowners’ association board, which gave its official approval.

“We started looking for ways to actually draw a 3D crosswalk because it wasn’t obvious just from the picture of the finished crosswalk how to make it happen. That’s when we found the article laying out the steps,” Gillen-Ruth says.

She also reached out on behalf of the team to Gauthur Ìvar Holdersson via his company’s Facebook page since none of the students are on Facebook.

“He was very helpful and when I told him the location of the crosswalk, and he suggested we use the mirror image crosswalk design he had completed in Iceland instead of the one-way crosswalk, since the road has two-way traffic.”

The boys learned a bit about what’s involved in striping layout, taking more than a few measurements so they could determine how many stripes were needed and where the focal points should be.

“The one day they were all available the weather was raining, and it was hard to get measurements,” Gillen-Ruth says. “The back door and steps across the street leading to the parking lot weren’t parallel, so the crosswalk needed to straddle both to be safe. It took several attempts to hand draw the crosswalk based on the measurements. The article in Pavement was invaluable.”

The one stipulation from the homeowners’ association was that the road be painted by professionals, so the next step was to find a contractor who would stripe the road and be the first to create a 3D crosswalk in New Jersey. The boys reached out to four companies. None had done a 3D crosswalk but two were interested.

“We were nearing the end of November and the weather was staying cold and turning rainy and icy. It was also the end of roadwork season and the companies were very busy with last-minute jobs,” Gillen-Ruth says. “We had to race against the clock to beat the bad weather.”

Andrew Muller, co-owner of V&V Line Striping, had seen 3D crosswalks online and liked the idea of helping the students.

“I said we would be interested especially with kids involved, kids who are using their minds and thinking outside the box to get something done for their community,” Muller says. “They asked what it would cost, and I just said no charge, that we’d be happy to help them out. That we’d be able to take care of it for them.”

Because it was the first 3D crosswalk V & V had painted, they painted a test crosswalk at their facility before coming on November 14 to paint.

“When the crews came back and saw it, they were like ‘what they heck is that?’”

Gillen-Ruth says the team shared the Pavement article with V&V, who used it as a guide, along with the team’s hand-drawn mirror image crosswalk to know the exact dimensions and location.

“The students have been very pleased with the results of their work,” Gillen-Ruth says. “The competition only requires teams to submit a mock-up of their solution to a community need. The boys went above and beyond and made it a reality. This is a huge win for pedestrians who want safer streets in the community.”

And they learned more than just striping layout.

“We discussed how new or radical ideas are often met with ridicule and resistance and that it’s important to keep going,” she says. “Fortunately, every single community leader we spoke with was willing to try something new. The team has already scored a win by making the roads safer.  The boys really want to raise visibility of pedestrian safety with more 3D crosswalks,  make it easier for other communities to install similar crosswalks, and save lives.  They are off to a good start. ”

How you can improve your operation by "thinking like a customer" when visiting other businesses.
Nick Howell
October 9, 2020
Follow Us