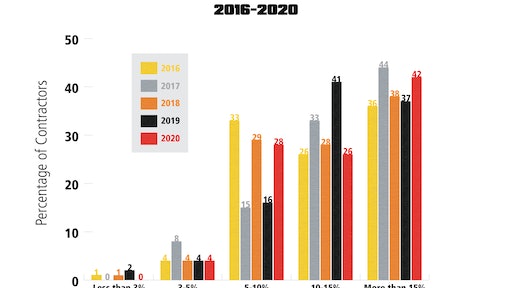 Here is the history of Pavement Repair-only sales:

The 2020 repair-only sales total represents the second-highest total for a year when we listed 50 companies, coming in far behind 2015 (which was a post-Great Recession year when pent-up demand was resulting in unusually large sales numbers).

Total Sales for the Pavement Repair 50

As a percentage of total sales by the Pavement Repair 50, pavement repair-only sales accounted for the smallest percentage  ̶  17%  ̶  since we started tracking this industry segment in 2014. That’s down from 21% last year and from 20% in 2017.

While it’s difficult to explain the decline, we’ve always noted that many contractors lump pavement repair in with their paving work. It’s possible that large contractors are even more likely to do this as patching and small repairs are often part of large overlay jobs – and with large contractors joining the lists this year that could account for the difference from previous years.

Contractors in the Pavement Repair 50 perform other work as follows:

Profit margins for the 2020 Pavement Repair 50 followed the trends of the other segments this year, tilting to higher margins while the middle margins experienced a shift.

Where the Pavement Repair 50 Work

Possibly demonstrating the impact large paving companies are having on the list, roads and highways make up a decent percentage as well with seven companies (14%) reporting sales from highway work (the same as last year) and 37 companies (74%) report sales from streets and roads (up from 20 companies last year).

Planning, organization and equipment selection can help pavement marking contractors get more work done and improve profitability in 2021 and beyond
Allan Heydorn
April 12, 2021
Follow Us