How to Paint a Hospital Helipad

How Pavement Solutions, Richmond, IL, laid out and striped a landing pad for a helicopter. 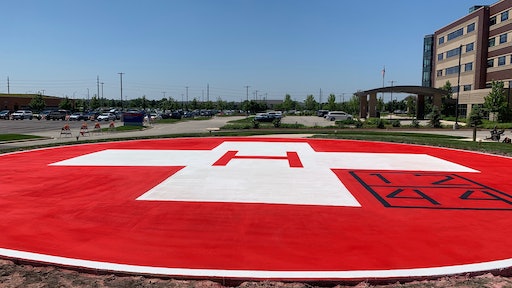 The concrete contractor used a wax-based sealer to slow the curing process of concrete to prevent cracking, but because Pavement Solutions couldn’t wait to apply the paint, they knew they would be repainting the helipad within a year.

In the spring of 2018, Centegra Hospital, Huntley, Il, was running behind schedule on construction of a helipad on hospital grounds. Once the concrete pad was constructed it needed to be painted to specifications before it could be used – and Centegra needed it ready for use right away.

They reached out to local contractor Pavement Solutions, Richmond, IL, to handle painting the helipad.

“It was a unique rush job that had to be completed immediately as soon as construction was completed,” says John Butler, owner of Pavement Solutions. “As soon as they finished the concrete work on the pad we had to rush to get it striped.”

Started in 2001, Pavement Solutions employs 50 people and generates between $8 and $9 million in annual sales. The company does some residential paving, but outside of that everything is commercial work including concrete flatwork and pavement maintenance services including sealcoating, cracksealing, striping and concrete joint sealing. Most of the work is in northern Illinois, but the company does travel extensively, providing pavement maintenance services to big box retailers throughout the country.

Pavement Solutions knew they were painting the helipad before the concrete had cured, and they knew the problems that was likely to create.

“We talked with them and made sure they understood what was going to happen. They knew we were going to have to restripe it in a year, so we both knew what we were getting into,” Butler says. “We were in cahoots with them.”

Pavement Solutions asked the hospital and the concrete contractor what kind of sealer had been used on the concrete. “When painting concrete we always ask what they seal it with because we know some concrete sealers aren’t compatible with the paint,” he says.

As Pavement Solutions learned, the contractor had applied a wax-based sealer to slow curing of the concrete pad and to protect the concrete from cracking.

“Wax-based sealers don’t match with the chlorinated rubber paint that was specified so we knew we were going to have to repaint it in within a year or so. But we told them that and they understood that it wasn’t going to hold up. But they needed it done.”

So Pavement Solutions applied three coats of chlorinated rubber red, marked and painted the white medical cross and the H in the middle, and added the numbers.

“The concrete was still green, but we just painted over it.”

The helipad was open for landings.

A year later, in the spring of 2019, Pavement Solutions was back on the job, repainting the helipad. And the second time they had to redo the complete layout process. Butler says that they first tried removing the chlorinated rubber paint with a shot blaster, thinking some of the layout and markings would remain intact.

“But the paint was so thick the shot blaster wouldn’t remove it,” he says.

So they turned to a 40,000-psi water blaster with a spin jet which removed everything.

“We had to redo the entire layout process because the water blasting removed all the markings,” Butler says. “We had to wait four days after the pressure washing to enable the concrete to dry out.”

And then they began to layout the job for the second time.

First they applied three layers of chlorinated rubber red, allowing the paint to dry before each successive coat. Once the pad was painted red, they had to lay out the cross, the H and the numbers. All measurements were based on a blueprint supplied by the hospital.

The concrete pad was 44 ft. in diameter so Eduardo Escorza Jr., who has been with the company 12 years and led the crew, started by locating the center of the circle pad (see Figure 1). The Pavement Solutions crew marked two nonparallel lines from edge to edge of the pad, then bisected each line with a perpendicular line and chalked that line. Where the two lines crossed was the center of the circle, 22 ft. from the edge.

“Everything else was built out from there,” Butler says.

From the center point, crews measured and created the H, the target of the landing area, which had to have an east/west orientation. Vertical arms are 1 ft. wide and 10 ft. long, the horizontal center of the H is 2 ft. wide, and the H is 6 ½ ft. from side to side. The H was measured and taped in place to preserve the red.

Next crews measured and snapped chalk lines, creating a square within the red circle. Working within that square and working back towards the taped H, crews marked the outline of the white medical cross, then used a striper to paint the white cross, including spraying over the taped H. They also painted a 6-in.-wide white rim around the entire pad, eyeballing it all the way. Once the white cross was dry, they peeled up the tape, revealing the red H.

Once the cross was painted the crew measured the box for the numbers, chalking the box and the taping off the four numbers. (The 12 is the tonnage limit of the weight of the helicopter and 44 is the maximum diameter of the helicopter blades the pad can accommodate.) The box outlines were painted black using a machine while the numbers themselves were painted  by hand with a roller.

Butler says the three-person crew completed the job in one day over 10 hours, some of which was simply waiting for paint to dry.

“I sometimes take for granted what this crew can do,” Butler says. “They’ve done some really neat work from American flags to maps of the United States and this is just another example. It’s a great marketing piece for us.”

How to Layout and Stripe a “Floating” Crosswalk