How to Decide to Spray or Squeegee Sealer onto Asphalt 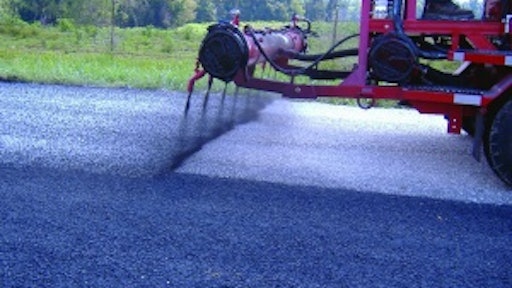 "While spraying, you can control exactly how much material goes down and give the customer what the product specifications and job demands," says Gordon Rayner, CEO of California Pavement Maintenance.

When it comes to applying sealants, pavement maintenance contractors have several options. They can employ a spray system (skid or trailer), a piece of ride-on equipment with squeegee and/or spray application options, or they can apply the material by hand, using a squeegee or a broom. Why use one approach over another, you may ask? According to equipment manufacturers, the decision hinges on several variables including application, material being used, and personal preference.

East vs. West
It wasn't all that long ago when the decision to use spray or squeegee depended on where you were located in the country, explains Gordon Rayner, CEO of California Pavement Maintenance. East of the Rocky Mountains, it was spray and west of the Rockies it was squeegee. "In the late 1970s, the use of coal-tar based sealant was discouraged in favor of fiber-filled, asphalt based sealant," he recounts. "Since fiber clogged up the spray tips, contractors opted for squeegees. This trend persisted until 1998 when manufacturers started to introduce asphalt-based sealant without fiber."

Without material complications, spray made its way west, allowing contractors to make their application decision based on other factors. What are some of the pros and cons? Rayner asks rhetorically. "Using a squeegee puts pressure on the sealant giving it an opportunity to fill cracks and voids and create a better bond with the pavement surface. The drawback is that it's difficult to get enough sealcoat on a smooth surface and, if the surface happens to be coarse, you can easily put down too much material. In other words, it can become difficult to control the spread rate with a squeegee."

He continues, "While spraying, you can control exactly how much material goes down and give the customer what the product specifications and job demands. Spraying receives a bad reputation when the operator intentionally excessively thins the material or just applies the material at a low spread rate. The result is that sometimes customers perceive that you cannot apply as much material with a spray machine as you can with a squeegee." That perception, Rayner notes, is not reality.

What is reality is doing the best job you can for the customers. "The best of both worlds," he adds, "is putting down two sealant applications, the first with a squeegee and the second with a sprayer. The second coat with the sprayer covers up any blotches and squeegee marks that may not wear evenly."

Two is Better Than One
If you cannot see the logic spending time and material putting down a second round of material, Neal Manufacturing sales manager Eric Humphries counters with these considerations. "First," says Humphries, "spraying on a second coat of sealer covers up any slight imperfections. For example, when sealer dries it contracts and leaves behind pin holes. The second coat of sealer fills in the holes, and doesn't take nearly the amount of time or material that the first coat did. There's no cutting in the second time around and operators are really just applying an overcoat to fill in small holes and smooth out other imperfections. In terms of time spent, the second coat takes probably half as long as the first."

He continues, "One coat seemingly does the job because it leaves the pavement looking nice and dark, but the whole idea of sealing a drive or parking lot is to keep out water. The second coat facilitates that."

Humphries, also a former contractor, reminds readers that the best temperature for applying sealer is 50°F and rising. In most instances, the second coat can be applied within one or two hours of the first coat, depending on weather conditions. Advise customers to allow the second to dry another 24 hours before driving on the surface, he adds.

Timely Tips
"For cutting in, I encourage contractors to use a quick multi-step process," says Seal-Rite president Brent Loutzenhiser. He explains: "Using the spray wand, lay a bead of material down along your boundary. Then using a soft bristle broom, push the material out to the object (curb, brick, etc.), but don't get any on it - a soft bristle broom can do this. Then, to get to the desired width of cutting-in just come back and make the desired pass(es) with a squeegee. Normally, you'll want to get yourself away two or more feet."

After the sealant has been applied to the desired cut-in width, Loutzenhiser likes to complete the job with a spray wand. "Even though I grew up on a ride-machine," he relates, "I prefer the spray process because it's faster, easier, better, and you're more in control."

This former paving contractor leans toward spraying versus using a squeegee machine because, he says, he can get a more uniform job in less the time. "It's difficult to compete with spray. It's faster than using a squeegee or ride-on machine, and it gives the operator better control of the material. There is a misconception that spraying doesn't get as much material on the pavement. With the spray process all of the variables faced during application are in the contractor's control. When spraying, the application depends on the tip, how the material is cut, the pressure at which the regulator is set, the speed at which the contractor walks, and the height of the wand from the pavement - therefore putting all the variables in the contractor's hands. When you're using a brush, a squeegee, or a squeegee machine, the application rate is contingent on three variables over which the contractor has lesser control: How the material is cut, the squeegee that's being used, and the quality of the asphalt."

He adds, "While many people feel using a squeegee machine is a one person operation, it's not - you still need a crew. Plus, there are many residential and smaller commercial jobs where a ride-on machine is not warranted or where it would just be awkward to use."

More sealer is not always better, say the manufacturers. Loutzenhiser notes that following the directions on the material label will go a long way toward getting the job done right. "You should be following the material manufacturer's recommendation for application and cut rates. Make sure you get all the information you can plus the MSDS for the products you're using so that you fully understand what you're working with."

The goal in applying sealant is to protect the existing asphalt by keeping out vegetation, gas, oil, water, and sunlight. Sealing a drive or parking lot has an appearance function, too. "Customers want a neat-looking job, and that's where taking care and using the right approach for cutting in is important," Loutzenhiser reiterates. Paying respect to aesthetics, he encourages contractors to keep sealer where it should be, cover all of the customer's asphalt, and maintain square squeegee lines. As he points out, "Those lines may eventually bleed through and become more evident as time goes by, even if a second coat was applied."

Based in Neenah, WI, Rod Dickens is a freelance writer specializing in the construction industry.

How to Price Asphalt Sealcoating

How to Spray Asphalt Sealer Effectively

Flexible, durable, waterproof and highly adhesive— when properly applied, Mastic One is a hot-applied pavement solution unlike any other.
September 24, 2020
Latest

A hot-applied, pourable repair material; Mastic One® requires no compaction and provides a seal that is air-tight, waterproof and flexible.
September 24, 2020

Whether you’re a dedicated milling contractor or a paving contractor looking to bring this service in-house, there are many things to consider before making a purchase. This infographic can help.
September 27, 2019
Follow Us