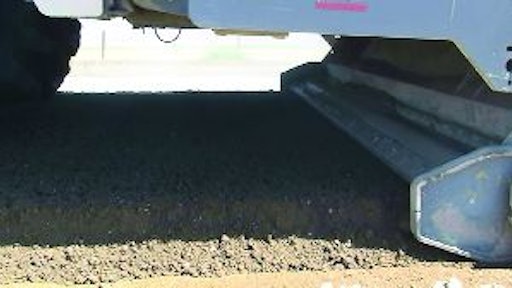 In the case of the Hwy. 166 project, cement was spread over the original road prior to recycling to provide additional structure and strength to the materials being mixed and compacted.

When rebuilding a heavily traveled road, time and safety are critical to the success of the project, and doing so in a cost-effective way bodes well for the road agency customer and taxpayers.

Dixon, CA-based Western Stabilization addressed all three factors this past summer as the subcontractor on Hwy. 166 rebuild through the Town of New Cuyama.

California Department of Transportation, better know as Caltrans, designed the project, which called for the existing asphalt roadway and aggregate base to be Cold Foamed In-Place Recycled (CFIPR) in preparation for a hot-mix overlay.

Granite Construction out of Santa Barbara served as the general contractor on the $17 million project, performing initial milling to correct the slope and profile of the road, supplying the oil used in the CFIRP, compacting the recycled material, and then placing five inches of hot mix over the widened roadway.

Located between Route 33 and Cottonwood Canyon, and running right through the Town of New Cuyama, Hwy. 166 carries a heavy truck traffic load as a farm-to-market, as well as other motorist who use it as a shortcut from I-5 and Hwy. 101.

The remote location of the project, almost an hour from the nearest major city, also proved a logistical challenge in supplying equipment and material required to execute the job.

Caltrans? design called for a recycling depth of 11 inches on most of the 30 lane miles to be rebuilt and 12 inches in front of two schools located along the project. The extra depth was required to accommodate heavy buses that provide service to the schools.

The CFIPR design specified an average oil content of 3 percent and cement content additive of 1.5 percent. The average existing asphalt depth of the old road surface varied from 4 to 5 inches.

According to Kevin Berry, business manager for Western Stabilization, the asphalt depth was much thicker in areas that had been patched over the years and much thinner in areas that had been milled to correct the slope. And along the shoulder areas more oil was required in the recycling process to accommodate the widening Caltrans called for in adding a 4.5-foot paved shoulder to the 12.7-foot travel lanes.

Using two Wirtgen 2500 reclaimer/stabilizers (one with a 10-foot-wide drum and one with an 8-foot-wide drum), Western Stabilization crews managed to recycle an average of 1.5 lane miles per day.

Approximately 30 lane miles were completed in 20 working days. Western Stabilization used 145,377 gallons of oil and 3,000 tons of cement to foam and stabilize approximately 301,400 square yards of road material at a cost of just under $1 million, which was a considerable savings for Caltrans.

The low-cost (as compared to a typical mill and fill or total rehabilitation) CFIPR process involved injecting a controlled amount of water into a hot penetration-grade asphalt in a series of individual expansion chambers of the recycling equipment used to pulverize and blend the road material.

The foamed or expanded asphalt technology stabilizes the existing road materials by increasing the surface coverage of the liquid asphalt binder required to hold the aggregate together after compaction. The process also allows traffic to return to the treated road as soon as compaction has been completed.

In the foaming process, small amounts of cold water injected into the hot asphalt cause the asphalt to rapidly expand to approximately 20 to 30 times its original volume, giving it a high surface area to bond all the aggregate and fines blended in the pulverizing and mixing of the road materials.

The foaming technology often requires additional minerals ? cement, lime or aggregate fines ? to be added during the pulverization/mixing process to improve the stabilization of the materials being blended.

In the case of the Hwy. 166 project, cement was spread over the original road prior to recycling to provide additional structure and strength to the materials being mixed and compacted.

One of the primary benefits of CFIPR is that it promotes a sustainability approach to utilizing existing aggregate resources. It eliminates the cost of removing the existing road base and replacing it with virgin aggregate material. It also eliminates the emissions produced by trucks that would be required to haul the old material away from and the new material into the project.

While the benefits of reusing valuable aggregate and asphalt resources were clearly identified by Caltrans in the CFIPR design of the Hwy. 166 project, executing the preservation process did pose some challenges for Western Stabilization.

?We encountered some challenges, particularly with high temperatures, which made it difficult to cut the existing asphalt late in the day,? Berry says. ?It slowed production and we found that using the 8-foot-wide recycler proved to be more efficient when making a cut down the travel lanes, and then using the 10-foot-wide recycler to pulverize and blend material on the remaining travel lane material and adjacent should material.?

As part of the construction process, the road was widened to provide a much needed shoulder and several turn lanes. According to Berry, the stretch of road being rebuilt did not have shoulders for the most part and was the site numerous accidents over the years.

?We were only allowed to work on one side of the road at a time and we were also limited to a four-day work week because of the heavy traffic the road carries on Fridays,? Berry says.

Crews had to constantly monitor the blended material and make frequent adjustments to the oil content being injected during the foaming process to accommodate the wide range of materials found in the full-depth recycling process.

But for Western Stabilization, the first contractor to bring the foamed asphalt recycling process to the Western United States and introduce the technology to Caltrans, successful completion of Hwy. 166 proved why the company has established such a strong reputation as a road recycling expert.

Berry estimates the cost savings alone on the Hwy. 166 project saved Caltrans between 40 and 50 percent of what it would have cost to remove and replace the roadbed. It also reduced the time required to rebuild the roadway, minimizing the inconvenience to motorists.

For Western Stabilization and Caltrans, CFIPR proved to be the right solution for improving the ride quality and safety of Hwy. 166.

May 13, 2014
Latest in Pavement Preservation & Maintenance