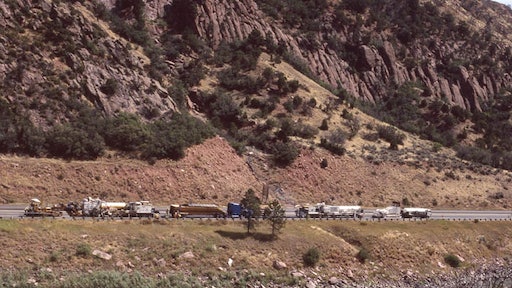 Hot In-Place recycling (HIR) has proven to be a viable technique for rehabilitating pavements at a low cost by using existing in-place materials.
The Asphalt Recycling and Reclaiming Association (ARRA) describes HIR as an on-site, in-place method that rehabilitates deteriorated bituminous pavements and minimizes the use of new materials. The process can be performed as either a single pass (one phase) operation that monolithically recombines the restored pavement with virgin material or as a two-pass procedure where the restored material is recompacted and the application of the new wearing surface then follows a prescribed interim period that separates the process into two distinct phases.
With an ever growing demand for more economical, more environmentally friendly alternatives to rehabilitating the millions of miles of roadways around the world, it's no surprise that HIR has become an attractive alternative to traditional mill-and-fills for DOTS and municipalities.
Paveover Inc., Albuquerque, NM has been using HIR trains for the last 10 years. Before he started in the Hot In-Place asphalt recycling business, Lee Smith, owner, was a traditional paver contractor. He says there are three reasons he switched to HIR:
1. It's more economical. "The materials are already there," he explains. "We only have a finite amount of materials on this Earth. You're preserving oil and energy."
2. It's cheaper than traditional mill-and-fills. "We save our customers money - in most cases it's less than what a mill-and-fill costs."
3. It's the right thing to do. "Why not?" he asks. "It's common sense  - we only have so many pits to take rock out of. We should reuse the materials we have."
Smith sees a slow acceptance of HIR in the U.S. "It depends on the state. Colorado and Arizona seem to be on board with the concept. But in Canada, the idea is fully embraced because environmental concerns seem to take precedent."

Paveover recently completed a project in Colorado in July 2010 using the HIR process. This surface treatment project took place along 16 miles of State Highway 82 in Eagle and Pitkin Counties between Aspen and Basalt.

A 2-inch HIR was performed on the top two inches of the exiting mat on the driving lanes only. A 1-inch stone matrix asphalt (SMA) was placed over on the entire asphalt service, from the edge of the asphalt and including the shoulders.

Rex Goodrich, Region 3 materials engineer with the Colorado Department of Transportation (CDOT), says they have an array of different surface treatments to pick from when choosing a preservation tool, but when there is significant amount of rutting, HIR is a great choice.

"There was severe rutting on this road, especially in the travel lane," he says. "The road had been widened decades ago; the joint was poorly constructed; and there was cracking to the surface. The joints were becoming a maintenance burden – as the traffic was pounding the surface, pieces were coming out. So, to just do an overlay wouldn't be adequate. We needed to repair the surface that was there."

Paveover uses the Ecopave Pyropaver 300E, which is a two-stage system, for its HIR projects. On State Highway 82, the process followed these steps:
• Preheating of the asphalt surface that is to be recycled
• Reheating and milling of approximately one inch and placing it in a windrow
• Re-heating and milling of approximately one more inch, picking up the previous windrow and combining it with the windrow produced with the second heating and milling operation
• Additional virgin mix and/or rejuvenate agents may be added during this process
• Picking up the combined windrow and "running it through" a heated twin-shaft pugmill
• Placing the recycled asphalt into a lay down machine with automatic grade controls

"We feel the multi-step process produces a smoother road and obviously a better blending and heat environment of the mix," says Smith.

Goodrich agrees, adding, "This HIR method constructs joints very well and repairs pavement to a 'as good as new' level."

(subhead) The reasons for choosing HIR

HIR was chosen for the State Highway 82 project for several reasons says Goodrich. "With a traditional mill-and-fill, you need new aggregate and new oil – virgin material," he explains. "With HIR, you're revitalizing the materials already in place. It's recycling what you have; it's somewhat of a green solution."

HIR also increases the structural value of the pavement, says Goodrich. "With HIR, you have increased strength of the material," he says. "A typical HIR treatment will last up to 10 years, so the longevity is hard to match."

Of course, there is a downside to HIR – the length of the equipment train can be a challenge from a construction standpoint, says Adam Cornely, project engineer with CDOT.

"The total length of the heater remixing equipment train required to perform the operation caused some traffic issues, specifically when performing the remixing in busy intersections," he says. "Traffic is very dense on Hwy 82. It's a major commuter route, so we had to take the traffic impact into consideration. With mill-and-fill, you would need a week or two for milling, then however long for paving, creating two disruptions. While it was a disruption to traffic – it took about an hour to get through some busy intersections – HIR was a better choice for this project."

SMA was chosen as the 1-inch wearing coat choice because it resists rutting, says Goodrich. "SMA is good for protecting against premature rutting and offers a durable driving surface," he explains.

As far as State Highway 82, the project went well and hit no snags. "I think the state of Colorado was pleased with the results," says Smith with Paveover. "HIR was the chosen as the best process for that project when the state looked at the cost differences of other processes, traffic impact, etc."

• Recycling process replaces pavement to original elevations so there's no need to treat turn lanes or other less worn travel areas
• Recycling process achieves productivity up to 2 1/2 miles/day
There aren't many disadvantages to using HIR, says Smith. "You can't really do a parking lot with this equipment because the train is too big," he says. "But the greatest benefit of HIR is reusing the resources we already have on the road. We've overlaid our roads enough that there's plenty of good rock and asphalt that we can use again. It's just the right thing to do."

Ecopave Systems Inc. has responded to the demand for more environmentally friendly alternatives with a new HIR system: the Ecopaver 400. The Ecopaver 400 is an updated version of the company’s Pyropaver 300E system.

Two-stage system
Ecopaver 400 is a two-stage hot- in-place asphalt recycling system. The patented system (sometimes referred to as a "train") consists of a pre-heater, two self-propelled heater/miller units and a pugmill. Following the train are a conventional paver and rollers.

Smoke reduction
The Ecopaver 400 not only performs the recycling of existing roads, it also incorporates a full emission control system which makes the system virtually smoke free.
"Smoke is collected through suction fans and ducting," says Al Rorison with Ecopave Systems Inc. "The system then incinerates the smoke and NOx gases to reduce the visual smoke entering the atmosphere."