Pavement Recycling Systems uses the CIR process on the streets of Beverly Hills. 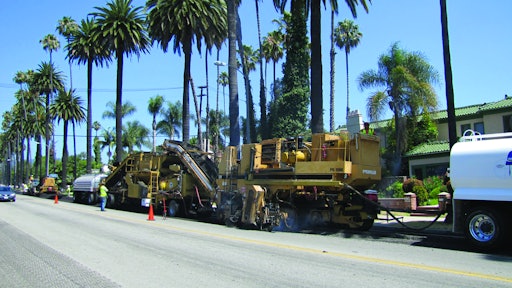 It's not easy repairing and repaving roads in heavily traveled areas. In August 2010, the City of Beverly Hills had 1.3 million square feet of roads that needed repaving, a tough job for any contractor. The city not only needed the job done, but it wanted to reduce congestion due to construction as well. Pavement Recycling Systems, Mira Loma, CA, was brought on board to do the job.

Pavement Recycling Systems' solution was to use a process called cold in-place asphalt recycling (CIR). In this process, the existing pavement is milled, recycled and used in the new pavement all right on the job. "Cold in-place asphalt recycling is a way to take the existing asphalt and reuse it on site at half the price of traditional mill and fill," says James Emerson, Sustainable Pavements Division of Pavement Recycling Systems. The milled asphalt is used as the base course for the new asphalt being placed.

CIR is done using a train of asphalt milling, recycling and paving equipment, so the logistics of situating the train on the busy roadways had to be planned out, says Marco Estrada, P.E. Pavement Restructuring Division of Pavement Recycling Systems. Plus, motorist access had to be maintained. Estrada says the city required that one lane of traffic be open in both directions at all times. The roads were between 50 and 60 feet wide so Pavement Recycling Systems would open the outside lanes to traffic while working on the inside lanes and vice versa.

Pavement Recycling Systems had a crew of 20 employees working on the job for the milling and the paving. The entire process only took eight days, Estrada says.

The first piece in the train was Pavement Recycling Systems 12½-ft.-wide cold planing milling machine. It milled a 6-ft.-wide pattern at 1¼ in. deep, Emerson says. That front mill towed a 100% closed circuit portable recycle plant behind it. The milled asphalt went through the recycling plant until 1-in. material was left. That material was weighed on the plant's bridge before it was delivered into a pug mill.

In the pug mill, the material was blended with Western Emulsion's engineered Pass-R emulsion, Emerson says. The emulsion serves as a binder and rejuvenator for the recycled asphalt, Estrada adds. "The recycled asphalt is old and dry. The emulsion adds polymers to hold it together and rejuvenators soften the old asphalt," Estrada says. After the emulsion is added, the material is then dropped below the unit where it is picked up by a material transfer vehicle and added to the hopper of the paving unit, which is the last element of the CIR train. The road is then paved as usual.

To make sure the CIR and newly paved road were meeting mix design specs, Pavement Recycling Systems hired a third party engineering firm to take the core samples throughout the project, Emerson says.

Small carbon footprint. CIR does not require trucking asphalt from a plant to the jobsite. Emerson estimates that they eliminated 2,800 trucks from the roadway on this particular project.Reduced construction time. The reduction in trucks meant no waiting around for mix to be delivered. Plus, having both the milling/recycling and the paving crew working on site at the same time meant no one had to wait to do their job. So the project saw a reduction in construction time by 1/3, Emerson adds.Tighter surface. Emerson says a CIR surface is not as loose as a traditional milled surface. There was less loose gravel on the roadways for drivers to encounter. This resulted in less damage to vehicles and less damage claims from drivers.Cost savings. Emerson estimates at total of 42% cost savings for the Beverly Hills CIR project.

The City of Beverly Hills was so pleased with the CIR process that Emerson says it is considering using the same process to reconstruct an additional 28 streets. And with the ability to continually recycle asphalt every 20 years, Emerson says CIR means one pavement system no longer has to have only one lifespan.

Asphalt’s ability to make meaningful economic and sustainable impacts makes the material ripe for opportunity and contractors should become familiar with how to properly use the recycled material
July 6, 2020
Follow Us