Instead of suggesting a third overlay, S&G Asphalt wins a job proposing a remove and replace for a failing asphalt parking lot. 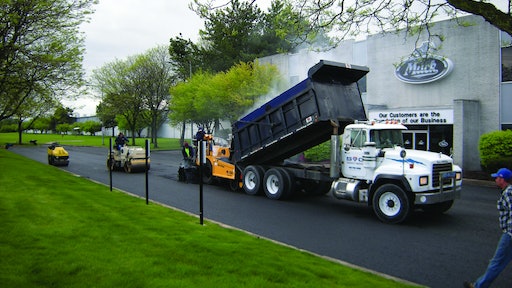 The first lift of the parking lot was a 2.5-in. lift of binder which was then compacted to 2 in. A second 2.5-in. lift and compaction to 2 in. followed.

Many contractors feel pressure to be the low bid. But most contractors know it's more important to offer a quality service even if it isn't at the lowest price. That's exactly how S&G Asphalt, Slatington, PA, approached its estimate when contacted by the Mack Truck company in its area.

The Mack Truck company had a 55,000-sq.-ft. failing parking lot at its Macungie, PA, location that needed to be fixed. S&G was one of three companies asked to submit an estimate, says S&G owner Tony Sorrentino. Sorrentino says both the original asphalt and the overlay on top of it were cracking and failing. Instead of suggesting another overlay, Sorrentino told the Mack company he wanted to tear out the old asphalt down to the stone subbase and replace it with new asphalt. Despite not being the low bid, Mack Truck awarded S&G the job.

Sorrentino says convincing the customer to do a tear out and replace instead of an overlay was not that hard. It was simply a matter or show and tell. Sorrentino showed the customer the problems with the current lot and the existing overlay. And then he explained exactly what the problems were, why they had occurred, and what could happen if the problems were just overlaid again. "After that the job pretty much sold itself," he says. "If you take time to educate the customer you don't have to worry about being the low bid.

But it wasn't that simple. S&G only had a two week time frame to complete the parking lot. Sorrentino also had to take into consideration the soil conditions in the area. The Macungie area has soft soil conditions – making it a challenge to achieve and keep a solid base during and after paving. Coupled with the spring thaw and some rainy weather, the S&G crew had to be extra considerate of how often they ran equipment over the soft soil.

S&G started the parking lot in mid-April 2010. In order to save time and use as much manpower as possible, Sorrentino combined his prep and paving crews having them work together at the job. The first step was to remove the old failing asphalt. Removal and stone base preparation took two days, Sorrentino says.

S&G used a track loader to remove the old asphalt and followed behind with a motor grader to level and fine grade the stone base. "We had to methodically plan so we weren't running our equipment repeatedly over the existing base and creating soft spots," Sorrentino says.

With a short time frame, S&G's crews were on the job all day which presented another challenge. S&G's asphalt supplier usually closed early afternoon, but the crews were working until 4pm or 5pm. Sorrentino met with the asphalt supplier who agreed to stay open later so the crew could get loads of asphalt in the late afternoon.

Once the stone base was ready, the paving crew got started using a PF150 Blaw-Knox paver. The crew laid a 2.5-in. lift of binder over the entire parking lot. "Because the subgrade was moving, that first lift gave us a better grade to follow," Sorrentino says. The first lift was then compacted to 2 inches using two Ingersoll Rand's DD24 roller compactors. S&G then laid down a second 2.5-in. lift which was compacted again to 2 in. resulting in a 4 in. asphalt base.

"Not a lot of contractors take the time to put down multiple layers of binder. It takes longer to lay it twice," Sorrentino points out," but with a softer subgrade it makes a huge difference. Two layers of binder allowed for proper compaction with each lift while keeping the number of roller passes down."

After the first two lifts, the paving crew followed up with a 1.5-in. overlay. The overlay gave the finished parking lot a smoother look than the two lifts of binder, Sorrentino says. "The binder lifts are porous so we put a final wear coat over them to make it smooth and to help keep water out of the subbase," he says. "It's harder for water to penetrate three layers of asphalt. That helps to keep the already soft subgrade dry resulting is less chance for movement in the subgrade to occur."

Once the paving work was complete, S&G subbed out the line striping work to finish off the lot. Despite encountering some rainy weather, S&G was able to complete the parking lot within the two week time frame.