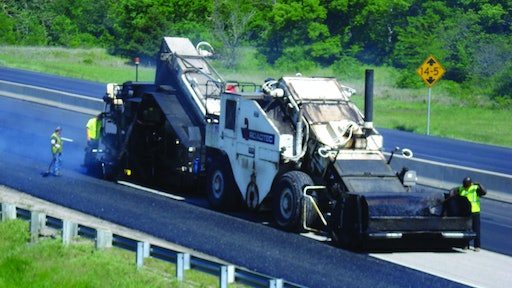 A Kansas contractor used two special high-production pavers to lay down 96 lane miles of Ultra-Thin Bonded Wearing Course in just 14 days during the spring 2010. The project involved paving two lanes plus the outside shoulder for a 16-mile stretch of Interstate 35 in Chase County, KS. It was a $3.4-million project for the Kansas Turnpike Authority (KTA).

"We moved along at 60 to 75 feet per minute on average," said Travis Shilling, project manager for Shilling Construction Co. Inc., Manhattan, KS. "And there were times when we were paving 100 feet per minute." A conventional asphalt paver moves at about 25 to 40 feet per minute.

The two pavers were Roadtec SP-200 machines that sprayed down a tack coat of polymer-modified emulsion - directly in front of the screed - at a rate of 0.19 gallons per square yard. The hot mix asphalt used a PG70-28 binder and went down at 5/8-inch thick. The gap-graded mix contained a minimal amount of 0.75-inch top-size aggregate and some sand.

The Roadtec SP-200 spray pavers feature gravity flow to carry the hot mix from the 11-ton hopper directly onto the augers. For the Kansas project, a Roadtec SB2500 Shuttle Buggy fed one paver while a modified Barber Greene MTV3500 transferred hot mix to the other paver.

"What achieves your high production on the ultra-thin mix is that you have a Shuttle Buggy in front of you that will hold a truck-load of material," says Shilling. "And you are laying the mix so thin that one truck will go quite a ways. You are laying it at about 70 pounds per square yard, so if one truck holds 25 or 26 tons, you can go approximately 500 feet with each truck. That way you can go really fast."

The Shuttle Buggy and the paver fit closely together, so we asked Shilling how the operators match their speeds to avoid collisions. "It's really tricky, and you just have to have good operators and good communication between the two," says Shilling. "The paver sets the speed; the paver operator just drives. The buggies are responsible to be hitting the hoppers to keep them full. The buggy matches the speed to the paver, not the other way around."

Two steel-wheeled rollers, operating in static mode, compacted the pavement behind each paver. The ultra-thin pavement cools quickly, so it must be compacted quickly. One roller works in the breakdown mode, and the other handles finish rolling.

"Within two hours you can drive on it," says Mark Roberts, KTA overlay inspector. "It works out just fantastically. The great thing about the ultra-thin is that you can turn traffic loose on it a lot quicker than with conventional hot mix. With a mill-and-fill, you pave it one day and let it cool off overnight. Then you can move traffic control and open to traffic the next day."

Shilling started one of the Roadtec SP-200 pavers on the north end of the project and the other on the opposite side at the south end. The contractor paved the 12.5-foot-wide passing lanes first. When that was finished on both sides, Shilling put the pavers in echelon, running with traffic, to pave the shoulder and driving lane. The shoulder paver took the lead and the driving lane paver followed.

The KTA required that the contractor only close down work zones for five-mile stretches at a time. "With the ultra-thin, we would run that five miles in less than a day," says Roberts. "Then the traffic control crew would leapfrog the traffic control devices ahead and we would keep on going. We could pave seven or eight miles per day."

Shilling set up an Astec Double Barrel portable plant on-site to produce hot mix. The plant ran at about 300 tons per hour on average - 350 tons per hour on good days, Shilling said. If the shoulder paver got too far ahead, the contractor would divert a few extra trucks to the mainline paver. The shoulder paver could go faster because it was paving a narrower width and could go further with one truck's hot mix. The contractor ran about 15 semi-trailer trucks on the project, and could have used a few more trucks.

This Ultra-Thin Bonded Wearing Course is a special process used in various states to preserve pavements and extend their lives. "That Chase County pavement was in fairly good shape," says Roberts. "On a scale of 1 to 10, I would rate it at a 7.0 to 7.5. It was a seven- to eight-year old full-depth asphalt pavement with minor thermal cracking and a good strong foundation. There was some rutting but it was very minimal.

"In the driving lane and the passing lane, there were no structural failures," says Roberts. "We observed weather cracking only."

"We place the Ultra-Thin Bonded Wearing Course to preserve what we have," Roberts continues. "The ultra-thin reduces the amount of mist and overspray that you get from trucks and traffic. And in the winter time, the ultra-thin bonding will hold salt in the surface a little bit longer than a conventional pavement will. So it gives us a better driving surface in the winter also."

Roberts says the KTA began using the ultra-thin process about three years ago. The authority expects the treatment to add 10 years to the life of the pavement.

The Shuttle Buggy worked very well for transferring ultra-thin mix to the pavers, Shilling said. The buggy keeps the paver supplied with hot mix, so that the paver does not stop and start for each truck.

"Another advantage is that the Shuttle Buggy remixes the polymerized asphalt," says Shilling. "The asphalt on the sides of the truck bed is always cooler than the material in the center of the truck. So the Shuttle Buggy remixes the colder material from the edges with the hotter material in the center and gives you an even-temperature mix that you are laying. You never are dragging any chunks of asphalt.

Shilling said they ran two pavers on one project to save time. "We were booked with so much work this past year that were were trying to make up some time to do it all in one year," he said. "Normally one paver is doing all of our own work and the others are out being a subcontractor for other contractors. It was our first project of the year, and one of our crews and their paver were not scheduled to go subcontract for anyone else. So we put both of those pavers on there to try to get it done faster.

"It worked," says Shilling. "It wasn't as great as we thought it would be but that was mainly because of the weather. Rain slowed us down a lot. We didn't finish twice as fast as with one paver, but probably 25 percent faster."

For KTA, Roberts was pleased with the project. "What really impressed me was that right out of the gate when we started up with a brand new machine, there was a representative from Roadtec with us for about three days," says Roberts. "That paver hit the ground running and we just made minor adjustments to the machine on the go. And it laid a beautiful surface. So I was very pleased with that."

And Roberts likes the Ultra-Thin Bonded Wearing Course. "You get less down time with all the traffic controls. You get a strong wearing surface on the road. It's a quiet surface. Water spray is decreased, and visibility on the road is improved. Plus you don't have a leftover stock pile of millings to try to get rid of. We are pretty pleased with what we have."