Unique project requires collaboration and coordination across agencies and states 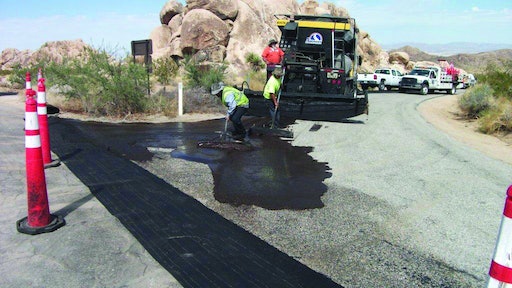 The micro surfacing application was placed in three National Park - Lake Meade, Death Valley and Joshua Tree - on the parking lots, campgrounds, marina boat parking, two airport runways and roadway areas. Micro surfacing was also placed on the highway and some parking lots over the chip seal as a cape seal.

The project required coordination between FHWA, the park service, Cactus Asphalt and American Pavement Preservation to schedule the applications.

"The partnering with FHWA management, the National Parks management, Cactus Asphalt and American Pavement Preservation was important in accomplishing the project," says Eric M. Reimschiissel, TITLE? with American Pavement Preservation. "The scheduling of the campgrounds and parking areas, as well as the traffic control on the highway sections was critical due the projects being done during high occupancy of the tourist season."

Below is a description of the micro surfacing work done at each park by American Pavement Preservation.

The asphalt surfaces were in fair condition in most of the areas. Some of the campground areas were in very poor condition, with heavy cracking and failures. Crack sealing was completed by Cactus Asphalt prior to the application of the micro surfacing. The application of the chip seals, micro surfacing and cape seals provided a great improvement over the existing asphalt surfaces.

The parking lots were in various conditions. Some of the surfaces including Scotty’s Castle and Artist Drive were in poor condition. "The last surface treatments applied in the park appeared to be slurry seal on some of the parking areas and chip seals on the roadways," says Reimschiissel.

"These surfaces although some were in very poor condition were greatly improved by these applications," says Reimschiissel.

The asphalt surfaces were in fair to good condition in most of the areas with prior slurry seals and chip seals applied. Some of the campground areas were in poor condition with heavy cracking and some failures. Crack sealing was completed by Cactus Asphalt prior to the application of the micro surfacing. The micro surfacing on these parking lots looked very good and provided a good surface.

Most all of the parking lots in the park received an application of micro surfacing. All of the surfaces were rolled with a nine-wheel rubber-tire roller.

Due to the locations being in three states and the project area over 350 miles apart, aggregate and emulsion were not from the same source for all locations.

"Six mix designs were completed and submitted to Federal Highway in Denver for the various project locations," says Reimschiissel. "Material samples of the aggregate and emulsion were taken directly from the stockpile sites. All of the aggregate tests required were completed and submitted for acceptance. The micro surfacing materials and mix was monitored during application, compared to the mix designs and test sections throughout the duration of the project.

"Emulsion and aggregate testing was completed by an on-site third partying testing lab for comparison to the mix designs and submitted materials test results," he continues. "Federal Highway would perform testing as well as a private testing lab on all samples as QC and QA. Project test sections were placed at each location with each mix design and evaluated prior to production."

The stockpiles themselves created a challenge. "The project locations were in all areas of the parks and needed many stockpile locations," says Reimschiissel. "Each stockpile location had special requirements for storm water protection (SWPPP), soil erosion and equipment parking."

Mix designs and materials were very important because the materials were placed in extreme temperatures. "During the beginning of the project, while working in Death Valley, we had snow on the Dante's View section which stopped the project during our third day working there, and during the late summer months in Death Valley we were working in temperatures over 117 degrees," says Reimschiissel. "These temperature ranges required everyone involved with the materials and application to be prepared and to have the mix correct at all times."

The campground sites and trailer parking areas that needed to be resurfaced were occupied by visitors who had reserved the locations a year in advance. "Many of the visitors were from out of the country and could not speak English," says Reimschiissel. "Moving and relocating these visitors was a challenge. The park personnel were very helpful with moving visitors as needed."

Scheduling was a very important part of this project. "Scheduling hundreds of camp sites and parking areas full of park visitors and then getting the people moved was a process," he says. "Everyone's goal was to be sure the visitors still had a good experience in the park while the project was being done. We tried to disrupt the visitors as little as possible. Most of the parking lots were done in halves and thirds so the visitors could still use the park areas. This presented needs for additional joints and hand work."

The micro surfacing was placed on two-lane highways, parking lots, camp grounds, airplane parking and airport runways. "The camp grounds and parking lots were difficult due to different sizes and irregularities of the asphalt surfaces requiring a lot of handwork," says Reimschiissel. "Two special lay-down boxes were used to place the micro surfacing material. The sites were spread out all over the parks. The crew could be placing micro surfacing on five parking lots 20 miles apart in the same day. The parking lots and campground sites were overgrown with vegetation and areas were dirty and needed to be cleaned. Surface cleaning, equipment moving and box cleaning between sites all required attention."

Box cleaning was done on tarps. All of the box cleaning materials and debris from the project was hauled out of the parks. "All of the equipment, including delivery haul trucks, had to be washed and inspected by FHWA prior to entering any of the park locations," explains Reimschiissel.

Even the smallest occupants of the parks required special attention. "Due the beauty and natural habitat in the parks, we had to know about the animals and habitat in the parks and to watch for them while we were working," says Reimschiissel. "Everyone on-site attended tortoise training and park vegetation training. We had to watch for the tortoises in our stockpile sites and on the roads. Snakes and bees were also an issue. Due to the critical growth of the vegetation, we were not allowed outside the work area or off the road shoulders. In all of these parks we were truly working in areas featuring our nation's prized possessions and we made sure to take extra care."

Safety is a top priority

Project safety was a high priority at all times during this project. "Safety was a concern for everyone due to the tight working conditions, the amount of equipment on site, the high ambient temperatures, the amount of people effected each day by the equipment and traffic control," says Eric Reimschiissel. "The campground parking lots were full due the busy tourist season in the parks. Coordination between everyone to move the park visitors and provide access was imperative to complete the work safely. The combined effort of everyone was needed to insure the tourist still had a good experience during their park visit."

The crew conducted weekly and daily safety meetings to discuss safety the issues including specific project situations and park visitor concerns so work on the project progressed safely for all. The crew also had to be aware of their physical condition while working due to the high ambient temperatures.

During each safety meeting the crew would discuss potential safety hazards, traffic control concerns, truck routing, locations of work issues with tourists and potential hazards that required special attention. Machine entry and exiting from the works zone was aided by a traffic control person. Stockpile sites were kept safe clean and orderly. "Thanks to the extra efforts and continued awareness of everyone, the micro surfacing on the project was completed without any safety issues," says Reimschiissel.