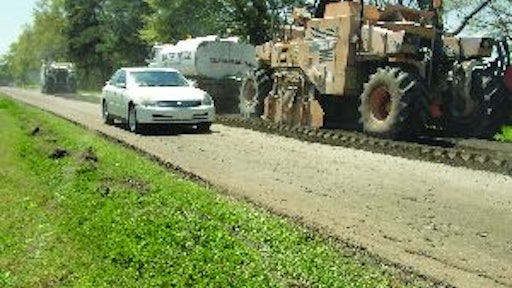 Wire Road in Tuscaloosa County, AL, was in bad shape. The 13-mile-long road had problems in three distinct stretches of pavement, accounting for 5.85 miles. Problems included alligator cracks and rutted areas due to worn out pavement and an insufficient base.

"These particular sections of Wire Road were severely damaged," says Scott Anders, project engineer for Tuscaloosa County. "We didn't want to spend money and time on portions of the road that did not need attention."

Because of the damage to the asphalt and base, it was determined that full-depth reclamation (FDR) was the best solution to stabilize the road. "[We] heard of other counties using the process with satisfactory results," Anders notes. "Since Tuscaloosa County was new to the FDR process, there was a lot of research and discussion that had to take place before we could commit to spending the money. Some issues we were facing included balancing cost vs. potential benefits, the unknown outcome and a general unfamiliarity with the process."

The area requiring repair had a history of extensive problems. "This particular portion of Wire Road carries approximately 685 vehicles per day -- 30% being large trucks," says Anders. "With a large rock quarry located on this section of the road, we decided FDR was the best long-term option."

Blount Construction Co. was brought in to complete reclamation along Wire Road. The contractor has been performing reclaiming jobs since 1993.

"Full-depth reclamation is a recycling process that pulverizes the existing pavement and some of the underlying base materials. [It] generally is treated with a number of additives to create a stabilized base course -- in this case, Portland cement," explains David Faust, estimator/project manager, Blount Construction.

FDR can restore the old pavement to a desired profile, restoring crown and slope in the road, and eliminate ruts and potholes, creating a uniform pavement structure.

"With FDR, it's also very easy to widen the road by a few feet where room permits. This is a concern with narrow county roads across the country, which can be so dangerous," says Faust. "Material cost is low as there is a minimal amount of actual new material brought to a job. Time of construction is also very quick compared to conventional methods of rehabilitation."

Initially, some officials wondered if FDR was the right choice given the high volume of traffic, some of which comes from heavy truck traffic in and out of a quarry.

"One of the concerns we always get from the different county and city officials is being able to perform the FDR work while running traffic," says Faust. "Wire Road has a Vulcan quarry midway through the job, in which a steady flow of trucks ran in and out of. We were able to keep them running with very minimal disturbance, other than having to wait a few minutes on a pilot car to lead them through the work zone.

"We reclaim roads in Metro Atlanta that have a 20,000 ADT (average daily traffic) count if not higher," he adds, "so FDR on a high-volume traffic road is totally doable."

To overcome the traffic challenge, Blount Construction worked longer days. "When weather allowed, we worked longer days and used both reclaimers to speed up production with a daily goal of 10,000 yds. per day," says Faust.

From the time the mixers initially hit the ground to the time the project was striped, it took the better half of October 2010, Faust notes.

The Wire Road project consisted of pulverizing the existing 78,757 sq. yds. of road bed to a 10-in. depth using a Terex CMI RS-800 and RS-650 reclaimer/stabilizer. Other equipment used included a Caterpillar 140 motor grader, a Hamm 3412 padfoot roller and GRW18 rubber-tire roller, an Ingersoll-Rand SD70 vibratory roller, 3,000- and 4,000-gal. water trucks, an Etnyre distributor and a sand spreader truck.

"We performed an in-place cement stabilization, mixing the cement with the pulverized asphalt and existing base materials at a 10-in. depth," says Faust.

With any FDR job, soil conditions, moisture control and achieving good compaction are key components. Soil conditions in this particular region were sandy clay with some river rock.

"Based on the lab soil reports, we infused the pulverized materials with 56 lbs. of Portland cement per square yard of road," says Anders. "The newly mixed material was graded, compacted and kept moist until the contractor was able to prime and sand the newly reclaimed section."

"On this particular project, challenges included getting gradation with the constant changes in asphalt thickness and surface conditions present," Faust comments. "Another challenge was paying close attention to the moisture content with the varying soils over the project."

For the final overlay on the project, 66,569 sq. yds. of type "J" bituminous surface treatment was laid, with 1 1/2 in. of asphalt topping on most of the road. The section in front of the rock quarry received 9,570 sq. yds. of a type "L" treatment and 2-in. binder course. Charles E. Watts Inc. performed the surface treatment work, and APAC Midsouth handled the paving.

The outcome and cost savings

The potential benefits of using the FDR process include less maintenance, safer travel conditions and long-term stability of the base material, says Anders.

"On the Wire Road project, the outcome is yet to be seen," Anders comments, noting the total project cost was $1,054,121.34. "Based on the best available information, we are anticipating a 15- to 20-year life span of the concrete reclaimed base. Our records show we have been averaging spending $75,000 per year on this portion of Wire Road, not counting resurfacing."

At that rate, the savings mount up quickly. "Hopefully, it will take 15 to 20 years before we can calculate the total savings," Anders states.