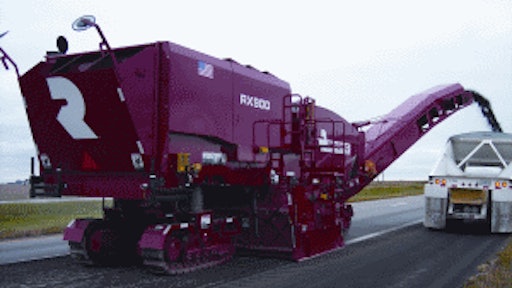 Werner painted their milling machine red and nicknamed it "Big Red" because they are avid Nebraska University football fans.

The Nebraska Department of Roads (NDOR) is using a process called micromilling, or profiling, to remove shallow ruts in Interstate pavement. And if the existing pavement is in good shape, there is no need to replace the milled RAP with new asphalt before restoring the pavement to traffic. With micromilling, the cutter drum on a Roadtec RX 900 mill carries 840 teeth on a 12-foot 6-inch-wide drum, compared to 271 teeth on a 5/8-inch (spacing) conventional cutter drum.

The added teeth produce a newly milled surface that is much smoother than the surface from conventional milling.

"If we're starting to get a rutting problem, we don't have to do a really deep milling job," says Tom Anderson, a project manager for the NDOR. "We get a smooth surface. Profiling takes the ruts out and doesn't tear up the surface. We get a lot smoother ride than with conventional milling."

Getting back to the original profile Werner Construction Inc., Hastings, NE, recently used a Roadtec RX 900 to handle the micromilling on a two-part project. The first job was to micromill a six mile stretch of Interstate 80, both sides, near Waco, NE; the second part was six miles of I-80's west bound lanes near Hampton, NE.

"We just milled enough to take the ruts out, no more than a 1/2 inch," says Ken Kalvoda, who was project superintendent. "The milling teeth just barely touched the bottom of the ruts on the highway."

Jerrid Fuehrer was an Inspector for the NDOR on the project. "The asphalt itself wasn't bad," said Fuehrer. "All that it needed was to put it back to the original profile."

Does micromilling cost any more than conventional milling?

"It's less expensive because we don't go as deep," says Anderson. "We put the slope back into it."

Micromilling, or profiling, costs $25,000 per lane mile, says Fuehrer. Obviously that is less expensive than milling 1.5 inches and replacing it with 2 inches of hot mix - a process that in Nebraska, costs $165,000 per lane mile.

Does micromilling consume teeth faster than conventional milling? Kalvoda says Werner replaced all worn teeth in the big drum that needed it after the first six-mile, four-lane project on I-80 - in preparation for milling the second portion on the west-bound lanes.

"We went clear through the drum so it would give us an equal cut across the drum," says Kalvoda. "The Roadtec people suggested changing the teeth in between the two projects, rather than stopping to do it in the middle of the second project."

John Irvine, vice president of sales and marketing at Roadtec Inc., cautions agencies against thinking that micromilling can replace conventional milling for all purposes.

"Some people profess that better densification is achieved when laying asphalt over micromilled surfaces. I don't believe this has been proven to be true," said Irvine.

"The additional cost of doing micromilling versus traditional 5/8-inch or profiling at 3/8-inch spacing is significant and should be taken into account when specifying this process," says Irvine.

"In Werner's case the drum was 12 feet 6 inches wide and had 840 teeth installed," he continues. "That compares to 271 teeth on a traditional 5/8-inch surface at 12 feet 6 inches wide. This is a significant amount of additional teeth and wear associated with milling at 2/10-inch spacing.

"The labor costs of changing drums and the additional horsepower and fuel must also be taken into account," says Irvine. "We just don't want agency people to specify this process thinking it doesn't cost them anything - or without evaluating the cost versus benefit of micromilling. This was the perfect job for micromilling in that it was a shallow cut depth and the road was intended to be released to traffic immediately."

Were the teeth more worn than on conventional milling?

"They were somewhat worn," says Kalvoda. "But when you are doing that profiling you don't want to start cutting grooves in the pavement because that takes away your good ride."

Did the additional teeth slow down the mill?

"No, we just went on down the road," says Kalvoda. "The added teeth didn't slow us down. We didn't have any problems with the drum."

The milling machine was fitted with dual MOBA skis for averaging depth control.

"Our height was adjusted with each side plate and down the road we went," says Kalvoda. "The side plate judges the depth of your machine. There's a little cable attached to it that tells the computer how much you are cutting."

This fall, Werner is planning to do a sizeable micromilling project on I-80 near Sidney, NE.