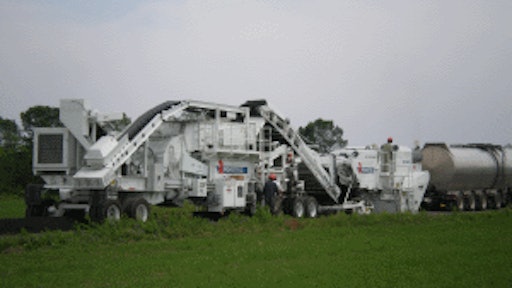 Cruickshank Construction Inc. recently plunked down 2.5 million Canadian dollars that say the market for cold in-place recycling (CIR) in Ontario is solid and growing. The money went to buy a train of equipment that includes a milling machine, a portable crusher with a pugmill aboard, a windrow pickup machine, and a new paver.

It looks like an investment, not a gamble. The provincial Ministry of Transportation and many municipal road agencies in Ontario already recognize the value of CIR. Cruickshank estimates the province's CIR market at 5 to 6 million square meters a year. That will grow as government stimulus funds run out and road agencies seek ways to stretch their dollars further, says David Semley, Cruickshank's business development manager.

And CIR can stretch dollars. Semley says to cold-recycle a road costs about 60% of what it will cost to do a mill-and-overlay. That's because the recycled asphalt does not have to be hauled back to the hot plant, recycled and hauled back out to the road. In Nevada, the state DOT not long ago estimated that CIR with a chip seal surface treatment can effectively rehabilitate a low-volume road at about half the cost of a 2-inch hot-mix overlay and surface treatment.

Based in Kingston, Ontario, Cruickshank is an average-sized asphalt contractor with two batch plants and two paving crews, plus the new recycling crew. "We had been looking at getting into the cold in-place recycling business for about five years, but never had the expertise to do it," says Steve Cruickshank, president of the company.

"Then we learned that David Semley had become available from another business and had experience with cold recycling," says Cruickshank. "So we started looking at it and wrote up a business case. Everything seemed to point to the fact that we should proceed. So we did. And then we started looking at the equipment that we needed."

Cruickshank chose a recycling train from Roadtec, an Astec company. Leading off the recycling train is a Roadtec RX-900 milling machine with a standard width of 12 feet, 6 inches. Working in a down-cutting mode, the RX-900 feeds recycled asphalt pavement (RAP) directly into a Roadtec RT-500 Mixing Trailer. The mill's conveyor places the RAP onto a JCI double-deck screen that measures 5 feet by 14 feet in size. Fully 100% of the material is screened to 37.5 millimeters (1.5 inches) minus; oversize RAP runs through a Telsmith impact crusher aboard the mixing trailer. A return circuit runs RAP from the crusher back over the screen.

Material that passes the screen drops onto the 48-inch wide belt with a weigh bridge on it. The weigh bridge sends a signal to the blending computer that adjusts the flow of additives to the Kolberg-Pioneer pugmill mixer located in front of the machine (see diagram). After a full mixing cycle, the rejuvenated RAP is discharged onto the roadway in a windrow. Roadtec says the belt scale system provides accuracy to within plus or minus 1%.

"One of our target markets is eastern Ontario," says Semley. "Until Cruickshank got into the CIR business there was no cold in-place recycling train in eastern Ontario." There are, however, several other CIR trains working in the province.

Semley says the carbon footprint of CIR is about half that of a mill-and-fill operation. "The greenhouse gases are about half – and we think that will become increasingly important," says Semley.

"Environmentally speaking, cold in-place recycling is the way to go," says Cruickshank. "Quite often, when you have environmental solutions, they are more expensive than the conventional method. But in this case, the environmentally friendly solution is lower in cost than the mill-and-pave method of reconstruction."

Cruickshank won its first project on Highway 140 north of Port Colborne, Ontario. It was a 5.5-kilometer-long project with about 45,000 square meters of recycling work. The Roadtec RX 900 cut 100 millimeters deep (3.9 inches), and worked along at about 260 to 270 tons per hour.

With the Roadtec train, Cruickshank can control the gradation of the RAP being recycled into the pugmill. "We have a crusher and a screen, and the screen ensures that the material meets the 37.5 millimeter size," says Semley. "If we have any oversize material, the crusher reduces that further."

"When you are working for the province it is mandatory to control the gradation," says Cruickshank. "Not every one of the cold in-place recycling systems allows for that."

Another advantage of the Roadtec train is that it adds emulsion or liquid binder based on mass, or weight, of the reclaimed material.

"Others measure their liquid additive based on volumetrics, and that does not meet the specs from the Ministry of Transportation in Ontario," says Semley. "Others calculate the amount of liquid that they add based on the theoretical volume. Ours is a real-world measurement based on the weight of material across the weigh bridge. That meets the spec from the MTO."

Semley said the Port Colborne project took just eight working days. Cruickshank used a 1-meter-wide milling machine working in echelon with the big RX 900 mill. The smaller machine windrowed RAP over in front of the larger one, which picked it up for processing. It was a two-lane road that required two passes with the two milling machines.

The crew does face a learning curve if they are inexperienced with CIR, says Semley. "By the end of the Port Colborne job we were comfortable with the process," he says.

The second CIR project for Cruickshank was a 55,000-square-meter job on Aviation Parkway in Ottawa, Ontario. The width of the project varied up to 16 meters wide, and the depths of cutting varied up to 175 mm deep. The contractor crushed RAP to the 37.5 mm spec and added liquid binder at a rate varying from 1.5 to 2.8 % by weight.

All CIR work in Canada is done by the low-bid system, and Semley is confident that they can keep the train working.

"We got started in mid-July, a late start," says Semley. "We expect to be busy for the rest of the season."