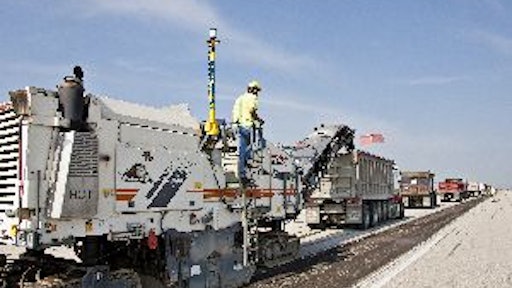 The Ohio State University Airport ranks in the top five airports in Ohio in the number of take-offs and landings. It is located about five miles from the main campus in Dublin, Ohio.

Recently, Shelly and Sands, a Columbus-based highway and heavy construction contractor, was selected to completely rehab one of the four OSU Airport runways. The university needed the project completed quickly, while satisfying the strict FAA quality requirements for grade, slope, accuracy, and smoothness.

"We began working on The Ohio State University Airport Rehabilitation, south runway and ramp in May 2009, and completed the project on time in November," states John Dowalter, survey manager for Shelly and Sands. "We first had to mill the existing asphalt to a variable depth of zero- to five-inches in multiple passes on the 6,000-ft. runway."

Shelly and Sands had a subcontractor mill the old surface to a new design using the Trimble GCS900 3D system guided by a SPS930 robotic total station. "After milling off the surface, we then went in and pulverized the remaining asphalt and sub-base to a 14-in. depth, then re-compacted and re-graded it," Dowalter says. "And then we cement-stabilized the pulverized material to the 14-in. depth and re-graded to sub-grade."

Between each process there was profile grading to match the specs of the provided plan. The runway and ramp areas both had variable cross-slopes.

The complex grading required was made simple with the help of grade control systems on the two motor graders. "Both machines are equipped with Trimble GCS900 grade control systems, allowing us to match the grading to the profile plan without errors or rework," states Dowalter. Trimble 5600 robotic total stations and R8-2 GPS receivers with TSC2 controllers were used for project control and data collection.

Shelly and Sands' subcontractor used its own GCS900 universal total station system on its Wirtgen W 200 milling machine. The benefit of the 3D milling system was that the correct grade could be achieved the first time. Much of the required design spec was already cut by the mill before the grader came into the picture.

"We eliminated the need for literally miles of stringline and easily saved a week's worth of staking because we were all using Trimble systems," Dowalter says. The engineering firm that developed the specs originally wanted stringline. "They struggled at first in understanding the technology and its benefits. Initially, they were trying to dictate how we were to rebuild the runway, but we stuck to our guns as far as using the Trimble 3D systems and proved we could achieve the grade tolerances they were requiring."

Understandably, the FAA is very strict in its requirements for airport runways. "We needed to hit the spec plus or minus a half inch," states Dowalter. "On top of that, we were building a completely new profile grade for the runway that the engineers had created, which meant variable-depth milling. To meet this more complex profile, we couldn't just set up the milling machine to mill four inches and let it head down the runway. We might be milling a half-inch at one point, get 500 ft. down the runway and be milling three inches."

The OSU Airport south runway rehab was completed in two phases and the ramp rehab project was completed in five production phases. The runway was paved in four 25-ft.-wide passes. The project also included ancillary work such as under-drains, perimeter under-drains and constructing berms on the sides of the runway, as well as airplane tie-down features on the ramp area for longer-term idle planes.

Dowalter reports that the timelines on a couple of phases were extremely tight. "The Trimble grade control systems really helped us out since we were able to accurately hit the grade profile without needing to go back and re-grade or do any corrections."

Dowalter notes that historically when working on an area that's not graded correctly, there can be a lot of rework that will show up in the final paving. There may be pavement cut-outs where milling and repaving becomes necessary. "With the Trimble systems, we avoided those headaches -- even with the variable cross-slopes for the length of the runway."

The project was completed on time, so Shelly and Sands did not incur any of the $10,000-per-day penalties for being late.

"When you think back and consider not only the amount of stringline that wasn't used and that machines and trucks didn't need to drive around the stringlines, as well as the one-pass accuracy we achieved, we're looking at very significant savings of time, money, and extra personnel," Dowalter states. "And we got everything done with smaller field crews. The systems helped us to meet the tight project schedule and grade tolerances, while also controlling our material yields."