An unconventional use of the micro surfacing paving process combined with pavement milling enables Intermountain Slurry Seal to reduce potholes on I-80 in Utah. 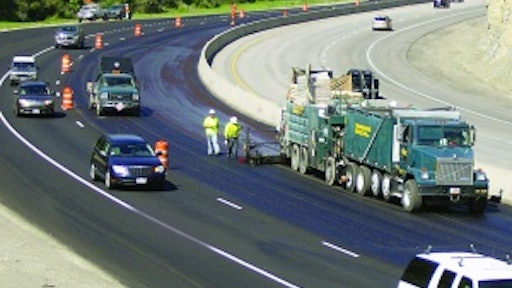 For the past few years, the Utah Department of Transportation (UDOT) was regularly forced to patch and repair a 9-mile section of I-80 - going east and west - that begins at the top of the Wasatch Mountain summit and extends to Salt Lake City, UT.

Previously, the state used an open graded surface course (OGSC) that was made up of a thin layer of hot-mix asphalt, comprised of 1/2-in. aggregate, and provided a smooth and attractive ride for motorists. An OGSC surface treatment is designed to have very small voids so precipitation seeps through it and drains off the side of the road. This process often works well but not in this part of Utah. Extremely cold temperatures prevented the treatment from bonding correctly to the existing asphalt overlay. Each winter, precipitation froze before getting the chance to drain and then created major potholes upon thawing. So, the UDOT looked at other surface options.

"The OGSC lasted only two years, and it was failing," said Deryl Mayhew, UDOT resident engineer and overseer of the project. "We were patching potholes constantly because the surface was cracking severely. We have many freeze and thaw cycles here because it might be in the twenties in the morning and then up into the fifties by the afternoon. The OGSC really takes a beating during these cycles, so we decided to see if micro surfacing could do better because of its history of being a good product."

"Last winter we only observed about seven total potholes going both east and west," said Mayhew. "And honestly, those had more to do with the underlying asphalt surface that failed than the micro surfacing. With the OGSC we had more than 700 potholes per year for the last two years. The micro surfacing treatment has held up well and doesn't have the cracking that we saw with the previous treatment."

Intermountain Slurry Seal took on many challenges when they executed this high-profile job:

Challenge 1: The Existing Surface. Micro surfacing is ideal for protecting roads in the early stage of deterioration and serves as a surface treatment that extends the life of the existing asphalt. It doesn't provide structural stability to the road. With the previous surface in such bad shape, Intermountain Slurry Seal performed a 1 1/2-in. mill to remove the unstable OGSC layers before applying the micro surface. A fine head mandrel with milling teeth, only a 1/4-in. apart was used to create a smooth milling surface that appeased ongoing traffic and provided a better bond between the existing asphalt and the new micro surfacing treatment.

Challenge 2: UDOT Restrictions. With an average traffic volume of 51,000 vehicles going in each direction per day, the UDOT and Intermountain Slurry Seal set up general guidelines to keep traffic moving as efficiently as possible. During rush hours, the contractor was allowed only a single-lane closure, while off hours allowed for a double-lane closure to do the necessary milling and surfacing. Failure to comply with any of these lane closure limitations would result in a penalty of $1,500 for every 15-minute violation.

"We did all of the milling work at night due to traffic restrictions," said Rusty Price, general manager for the Utah-based Intermountain Slurry Seal branch. "We cut the road the full width every night so it would be ready for motorists the next day. That meant backing up the mills and doing smaller stretches than normal. On an average night, we would cut between 4,500 to 5,000 ft."

Challenge 3: Proper Bonding. Due to temperature fluctuations and the considerable amount of snow the Parley's Canyon area receives, proper bonding of the new micro surface to the existing asphalt was crucial. Intermountain Slurry Seal thoroughly cleaned the surface so the pavement would adhere directly to the new treatment. Nearly all of the micro surfacing was done during the day because it adheres better in warmer temperatures, so the contractor was forced to keep a concise schedule.

Challenge 4: Environmental Concerns. Half of the job included work around the water shed reservoir that supplies drinking water to area residents. All mill tailings had to be cleaned from the road each day to prevent water contamination. Micro surfacing is a green product and is environmentally safe, but letting it get into the area drinking water was not an option. Parley's Canyon draws a lot of pop-up rain showers, so the crew watched the weather constantly to ensure the rain didn't wash anything into the reservoir. In addition, as a highly travelled road, the crew made sure everything looked professional to the public so they knew the drinking water would be kept safe.

Preserving I-80 for the Long Haul
The Parley's Canyon section of I-80 is steep with 8% grades, windy, and has limited visibility at night. The project was also unique because the micro surfacing treatment was put on top of a milled asphalt surface. In most cases, it is laid over the existing asphalt. Micro surfacing mixtures use four main ingredients, including a polymer-modified emulsion that produces a chemical reaction to force the moisture out and allows it to set in less than an hour - so traffic can return quickly. In total, Intermountain Slurry Seal used approximately:

"This process reduces the number of construction joints, or bumps, in the final surface," said Price. "We also used a variable width spreader box to adjust to varying pavement widths and prevent overlap and gaps. Combined with a continuous paver, this makes the road smooth and consistent for easy driving."

To ensure a smooth and long-lasting surface, Intermountain Slurry Seal put the micro surfacing treatment down in two layers. The first layer was used as a scratch coat to smooth and level the milled road. It was applied thicker at about 27 lbs./sq. yd. The second coat was applied as the final driving finish to provide improved skid resistance and protection against the extreme weather conditions. It was applied at 25 lbs./sq. yd.

"When micro surfacing east, we had a traffic control plan where the heavier trucks ran on the right shoulder and the other vehicles ran in the normal right lane," said Price. "This allowed us to work in two lanes at one time and still meet the UDOT's requirements. When going west, there wasn't enough room to do this so we had to perform most of the micro surfacing in one-lane increments and the center lane at night. "With this micro surfacing treatment, I am confident it will hold up better and won't delaminate from the pavement because it keeps precipitation out."

Read "Pavement Preservation on the Rise in Utah" for more about Intermountain Slurry Seal.

May 6, 2020
Latest in Pavement Preservation & Maintenance