Going for a Deep Heat Solution

Dustrol relies on a conventional paver as part of its economical Hot In-Place Recycling train. 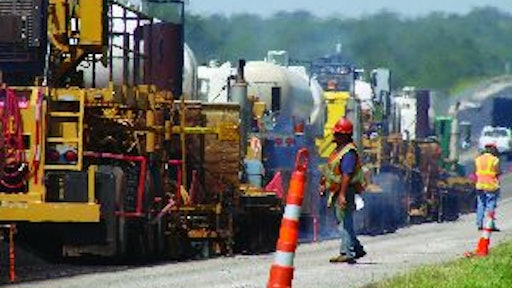 Similar to the oil crisis of the 1970s, recent exorbitant oil prices have had a profound impact on the price of liquid asphalt (AC). Current AC prices have reached $800 per ton in some regions. "Paying $800 for binder results in mix prices of roughly $40 per ton just for the liquid asphalt," says Tim Murphy, president of Dustrol Inc.

Coinciding with dwindling road funds, these inflated binder prices have many asphalt contractors and departments of transportation searching for more economical ways to reconstruct and rehabilitate roads. This gives an advantage to Dustrol Inc., of Towanda, KS., who has more than 30 years experience in the asphalt recycling and rehabilitation markets.

Dating back to the last oil crisis, Dustrol has focused solely on cold milling and Hot In-Place Recycling (HIR). In addition to its Kansas headquarters, the company has satellite offices in Texas, Nebraska, New Mexico and Colorado to serve a 16-state market.

"Throughout the years, HIR has proven to be very economical when compared to reconstruction, even more so now with the high AC costs," mentions Murphy.

HIR recycles 100 percent of the existing asphalt on site to effectively treat surface distresses such as raveling, potholes, bleeding, rutting and poor ride quality. Typical treatment depths range from 0.75 to 2 inches, although depths of up to 3 inches have been reached.

According to the Basic Asphalt Recycling Manual published by the Asphalt Recycling and Reclaiming Association (ARRA), the process consists of heating and softening the existing asphalt pavement, permitting it to be scarified or hot rotary milled. In Dustrol's case, the company employs a hot rotary mill process. The loosened asphalt pavement is then thoroughly mixed and subsequently placed and compacted with conventional HMA paving equipment.

Dustrol demonstrated its HIR process to the Oklahoma Turnpike in 2006, recycling a one-mile stretch of interstate at a depth of 2 inches. "Before placing a Nova-Chip overlay, the Turnpike left the road open for 20 days to high truck traffic in heat that reached 100 degrees F, and there were no distinguishable traces of rutting," comments Brian Hansen, vice president of Dustrol.

I-40 project
This past summer, Dustrol brought its Mobile Asphalt Recycling System (MARS) back to Oklahoma to perform HIR on a 40 lane-mile stretch of Interstate 44 on the Turner Turnpike, near Wellston, OK., as a subcontractor to Haskell Lemon Construction Company. The crews recycled a depth of 2.5 in. to rehabilitate defects in the road, which included surface oxidation, cracking and minor rutting.

Dustrol's MARS train was led by two preheaters, which gently heated and scarified the surface so as not to damage any of the aggregate. The preheaters were then followed by a series of milling heaters, which mill a portion of the road's surface, manipulate the windrow and heat the next layer to be removed. "The deeper we go, the more milling heaters we add to the train," explains Hansen.

Since the Turner Turnpike HIR application required a 2.5-inch depth, Dustrol's recycling train included four milling heaters to remove the material. The milling heads removed slightly more than a 0.5 inches of material at a time, while the machines' tunnel heaters jockeyed the windrows to heat the next layer of asphalt below and to keep the windrow warm.

"Historically, the maximum depth we have recycled is 3 inches," explains Hansen. "Beyond this depth, the windrow gets too big to manipulate and compaction densities are more difficult to achieve."

The last milling heater in the train injected a percentage of hot binder, based on mix testing and design analysis. On a typical application, the percentage of binder can range from a low of 0.1 gallons to a high of 0.5 gallons per square yard. The amount of binder used on the Turner Turnpike application ranged from 0.2 to 0.3 gallons per square yard. The windrow was then left to be picked up and paved in a similar fashion to a conventional paving process.

Traditional Terex paver
Many HIR contractors customize equipment in the recycling train to meet their own individual requirements. Some contractors employ a modified recycling agent/mixing/paving unit to lay the mix; whereas others use a free-floating screed attached to a heater/scarifying unit. Dustrol takes a different approach to paving the recycled material.

Dustrol has been perfecting its process for more than 30 years, and the contractor relies on a conventional Terex Mat Smoothness machine and paver to lay the mat. "We find we get a better final product by using the pick-up machine and paver," says Murphy. "By not tying it all together, we can modify the speed of the paver and adjust the screed settings to meet paving conditions."

Transferring the windrowed material to the paver for Dustrol's crew is the Terex MS2 Mat Smoothness machine. The MS2 attaches to and is maneuvered by the paver - eliminating the need for additional operators - and features three-point suspension with hydraulic front leveling. Wide 124-inch receiving tunnel and 60-inch asphalt elevator deliver more than ample throughput capacities to keep up with the recycling train. Direct hydrostatic conveyor drive and heavy-duty 0.5-inch-thick elevator flights maximize uptime.

Behind the paver, Dustrol employed a traditional three compactor rolling pattern to reach specified densities, which for the Turner Turnpike application were 92 percent of Gmm as determined from daily production.

Dustrol's full HIR recycling train achieved a production rate of 2 to 3 lane-miles per day on the I-44 Turner Turnpike application. After the HIR paving train finished its job, Haskell Lemon's crews topped the 40 lane miles of recycled road with a Nova-Chip overlay. Hansen estimates that the HIR process on I-44 saved the Turnpike 20 to 30 percent as compared to using a standard mill and fill process.

By employing a conventional paver as part of the HIR train, Dustrol's crews were able to deliver a smooth intermediate surface for the Nova-Chip overlay, which ultimately helped Haskell Lemon's crews achieve the 5-inch per-mile profilograph spec using a 0.2-inch blanking band and a maximum bump of 0.3 inches in 25 feet.
"We developed a smooth, non-stop paving process with the paver," explains Murphy. "This helped to meet the tough ride specs, which has been a determining factor for using a conventional paver as part of our process."

Asphalt’s ability to make meaningful economic and sustainable impacts makes the material ripe for opportunity and contractors should become familiar with how to properly use the recycled material
July 6, 2020
Follow Us