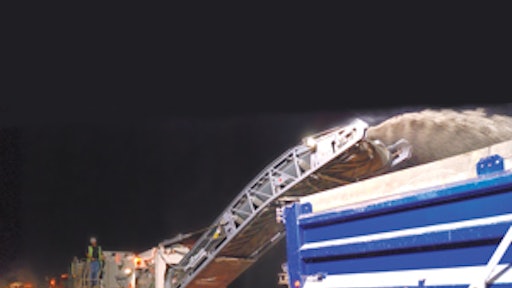 A failing concrete overlay on I-40 near Raleigh-Durham, NC, was determined by the North Carolina DOT to be in need of replacement. The specifications for the project provided that the concrete overlay be removed by cold-milling and replaced with hot mix asphalt (HMA) each night.

The Lane Construction Corporation was awarded the $21-million project for the North Carolina DOT, and has undertaken the milling, while its Rea Contracting LLC affiliate performed the HMA placement on strict nightly schedules.

"We're grinding anywhere from 3 to 3.5 inches of concrete overlay off the Interstate using a Wirtgen W 2200 cold mill with full lane, 12-foot 6-inch drum," says J. Todd Moore, superintendent of the I-40 project for Lane. "We have approximately 21 lineal miles to do, two lanes eastbound, and two lanes westbound, as well as all off ramps and acceleration lanes."

The existing pavement is three lanes wide each way, with the third (inside) lane made of full-depth concrete, recently reconstructed. The concrete overlay being removed had been placed over existing Portland cement concrete and was experiencing spalling at the joints, and patched "blow-out" potholes where heavy traffic was pulling material from the pavement.

"We have about 290,000 square yards of concrete removal required for this project," says Richard Snow, P.E., construction manager for Lane. "Our average pace of 2,200 lineal feet per night of lane works out to about 2,700 square yards. On weekends we do a lot more with our marathon closures. While we still keep one lane open, we are able to keep the two lanes closed 56 hours straight."

"We're finding both conventional and high early-strength concrete in the overlay, but the W 2200 is chewing right through it all," Moore says. "We've used the W 2200 for scarifying concrete as well, but this 3.5-inch-deep cut is more of a test for the machine during the four hours we work each night."

"We're using Wirtgen teeth with 1.25-inch spacing of teeth on the drum, with some 130 teeth on the drum," Moore says. "We're not using up as many teeth on the drum as before, but it's grinding up the concrete more efficiently, and pulling the material off the existing concrete. It's coming up in a little bit larger chunks, and the milling is more efficient. It's leaving a nice pattern on the pavement, and both the state and the paving contractor are well-pleased."

Nonetheless, Moore and his crews have experimented with the right configuration for the drum and machine.

"At one time we slowed the cutter drum down, but had no success with increasing footage, because teeth were breaking off as the drum was going slower, and not keeping up," he says. "We brought it back to its original speed - about 21 feet per minute, and now things are rolling. Because we're limited at night to what can be repaved before rush hour, I'll open up anywhere from 2,000 to 2,600 feet, depending on how tight the concrete is in our four-hour period."

Thus a given night would see Lane begin milling after 8 p.m. and conclude about midnight, with Rea Contracting paving the next four to five hours, with the last hour striping and removal of the traffic control pattern. "We have to be off the Interstate by 6 a.m., with penalties of $10,000 per hour," Moore says.

Superpave replaces concrete
The concrete overlay was being replaced by two lifts of a Superpave mix, PG 76-24 polymer modified binder, with 9.5 D mm aggregate. The first was a 2-inch lift, followed by a 1.5-inch lift on top to bring to grade. The HMA was provided by Rea Contracting out of its Northern Raleigh plant. North Carolina DOT specified a material transfer vehicle be used between truck and paver.

At midnight, the milling and paving supervisors meet to run numbers as to how far the milling can go that night, so both crews can finish their jobs that morning.

"We see how far we will mill, so we can finish milling and Rea can finish paving, all at a happy medium," Moore says. "We also have to figure in cutter tooth changes, and that will slow us down a little. Right now we do a complete cutter tooth change every 1,000 to 1,100 feet; the more efficiently we can change the 130 milling teeth, and install new ones, the faster we can get back to work."

Hydro-sweeping and infrared drying
Following the W 2200, a standard street sweeper was cleaning the milled surface, followed by a contract hydrovacuum truck which was water-blasting any remaining material off the surface, and vacuuming it into a tank for disposal.

"We're picking up the heavy stuff with the sweeper, and then we have a 36,000 psi-capable hydrovac truck clean the pavement with sprayed water, and vacuum up the water and any fines," Moore says. "This surface has to be totally spotless before we apply our tack coat."

And because the surface has to be bone-dry before the tack coat - and not much time in which to dry - Lane was using an infrared heater truck with generator to dry the milled surface prior to tack and overlay. "The truck has two 195-mph blower fans which blow off any standing water, and heating coils which evaporate any remaining moisture."

Lane's W 2200 with full-lane width drum was giving Lane the power and reliability it needed to keep this project on schedule and in budget.

Moore was finding that the new Eco-Cutter drum from Wirtgen was keeping the job moving along with accrued savings from use of fewer teeth. "This is the first application for which we've used this full-lane drum," Moore says. "This application is nice for the full-lane drum because it's one lane, one way, without having to back up and go. And the drum has a coarser pattern to it. My feeling is, 'the coarser, the better', because the asphalt can hold tighter in the voids than it can in a smoother surface."

Fewer cutting tools on the new Eco-Drum means less resistance to cutting and a higher rate of advance, with lower tool costs per milled cubic yard. These drums, with smaller number of point attack tools, make sure work proceeds more quickly and cost-efficiently.

Despite the fact that the standard-width Eco-Cutter may equipped with only 114 cutting tools, its performance with 1-inch tool spacing is roughly 20 percent higher than that of a standard milling drum with 0.6-inch tool spacing when working in hard asphalt and at a milling depth of 8 inches.