Experimental segments on County Road 9 will be observed through the seasons. 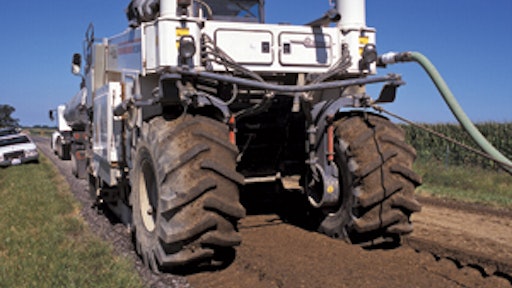 Champaign County, IL, is home to both rustic rural roads, and the sprawling University of Illinois home campus. And both of those reasons contributed to its studying foamed asphalt for reconstructing farm roads in summer 2005.

On County Road 9, the county put in place alternative base stabilization methods prior to hot mix asphalt (HMA) overlay, and a Wirtgen WR 2500 S owned by Dunn Co. of Decatur, IL, played a critical role.

"Both segments are experimental," says Gosia Adamczyk, P.E., a U of I engineering graduate, and senior resident engineer, Champaign County. "The project consists of two segments: the first, milling of the existing bituminous pavement and rubblization of two miles of PCC pavement, and hot mix asphalt overlay; and the second, the foamed asphalt section."

The condition of the foamed section was a deteriorating oil-and-chip surfacing, with hot-weather rutting and spreading of material. The millings from the first segment of the project were transported to the second segment, where they were used as a base for the foamed asphalt treatment.

"We milled off the existing pavement from the PCC under the west section, brought it here, placed it, rolled it, and now the foamed asphalt process is mixing this 4-inch lift of material, as well as the surface, to a depth of 7 inches while injecting water, asphalt and 1-percent fly ash," Adamczyk says.

Foamed asphalt is a cost-effective way of stabilizing road bases that's gaining interest from coast-to-coast. Foamed or "expanded" asphalt is created by carefully injecting a predetermined amount of water into hot penetration-grade asphalt in the mixing chamber of a pavement remixing unit, and offers a cost-effective alternate for road base stabilization.

The expanded asphalt has a resulting high surface area available for bonding with the aggregate, leading to a stable road base using the existing in-place materials. The benefit is substantial cost savings over use of asphalt emulsions for base stabilization, and complete elimination of the cure or "break" period. The foamed base then is graded and compacted, and can permit traffic — including heavy trucks — almost immediately.

Fly ash was being spread on top of the RAP/chip seal layers in 1,000-foot segments, in three passes, ahead of the WR 2500 S. Design of the foamed asphalt section was developed by Dunn Co. "They came up with the mix design and the right procedure," Adamczyk says. "We reviewed specs from previous foamed jobs that Dunn has executed, and used them as a guideline for us to write our special provisions."

Even though the RAP had been down just a week, already it had begun knitting together in the summer sun to create a continuous driving surface for local residents. "It looks very good," Adamczyk says. "The heat wave we've just gone through really helped ‘work' that material as they were rolling it. Everyone was amazed how ‘glued' together it stayed; it almost looked like a finished asphalt surface."

The project foam-stabilized 49,200 square yards of roadway, and the reclaimer was foam-stabilizing the 22-foot-wide road in three passes. The foamed section was 3.75 miles, and the mix design called for 2.5 percent liquid asphalt in addition to the 1 percent fly ash. The asphalt was a PG 64-22 performance graded material. The foamed base was to be covered by a chip seal, and possibly with a 2-inch lift of HMA in a couple of years.

"This is new for us," Adamczyk says. "We are looking for alternatives that are less expensive than your straight hot mix design, but more stable than oil-and-chip. We have a lot of roads that don't have a very high traffic volume, but still are subject to heavy loads, and we need a less-expensive alternate pavement design."

Even though this was a new experience for the county, engineers there did not feel that they were going out on a limb with foamed asphalt. "We're looking to save money with new technology, and if this works out we will try it on other roads," Adamczyk says. "We just want to see what kind of problems we may run into, and what to expect in the future. The contractor has the process down, they know what they are doing. I was surprised to see just how little oil you actually see after the pulverizer goes through, but it's there when you test it. It looks very stable, and feels very stable."

Dunn Co., the contractor, is attempting to interest Illinois counties in new technologies in reclamation, whether foamed asphalt or asphalt emulsion. As Dunn's WR 2500 S can do either form of stabilization, the firm tries to determine which is more appropriate for the customer.

"We're trying to get the counties to think about either foam or emulsion reclamation," says Jim Schwarz, vice president, Dunn Co. "All roads are different; some are better candidates for the emulsion, some are better for foam. Some are neither; fly ash or cement stabilization may be better."

Cores taken of County Road 9 were analyzed by Dunn Co., which determined that the road was a better foam candidate. "With this application, we knew we had the stability we needed with the materials here. We were looking for some minus 200 material that still had some pozzolanic action, so we went with Class C fly ash," Schwarz says.

Using a Wirtgen W 2200, Dunn also undertook the cold milling of asphalt on the western section of the project, and distributed the 4 inches of millings on the foamed section.

Dunn is getting a strong interest from the counties as it undertakes foamed projects. "The response has been very good," Schwarz says. "With every job we do, we get a lot of people who want to come and watch what is going on, and see the results when it's done."

Supporting this outreach to the counties is the WR 2500 S. "The capabilities that it gives with the one-pass mixing, and the way the mandrel [drum] mixes, is by far the best machine for mixing oil like this," Schwarz says. "It's a very reliable machine."

Later in the summer, Dunn Co. used a Wirtgen 2200 CR, which offers contractors and road agencies the best of both worlds, in that it's a cold in-place recycler — and conventional cold milling machine — in one robust unit.

This cold recycler processes roads with an integrated paving unit, but also serves as a high-performance cold milling machine which can remove asphalt courses to a depth of nearly 14 inches.

Offering performance well beyond conventional cold milling machines, the 2200 CR permits mixing of water-cement slurry, asphalt emulsion or foamed asphalt road base to a depth of 6 inches, all the while being capable of cold milling as desired. The machine has a cutting width of 87 inches, with an hydraulic, all-crawler travel drive. Its operating weight is 101,851 lbs. and boasts an 865 hp power plant.

In the meantime, Adamczyk and the county engineering department will be studying the performance of County Road 9. "We will be watching this road," Adamczyk says. "We will want to see how it behaves through different seasons, under different conditions, such as snow plows. But so far, I like it. It's very impressive."