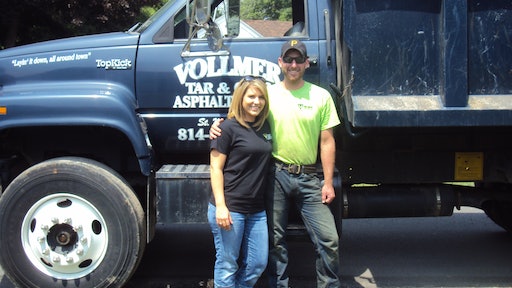 Angie and Glenn Vollmer, owners of Vollmer Tar & Chip, started their company chip sealing driveways in rural Pennsylvania and have expanded their services to offer paving.

Growing up, Glenn Vollmer was surrounded by equipment. Whether it was being around his dad’s farm equipment or his brother's excavating business, those days spent operating equipment were instrumental to the beginning of Vollmer Tar & Chip. Located in Saint Marys, PA, Vollmer Tar and Chip is one of a few contractors located in the rural Pennsylvania town.

Initially, Vollmer saw a need for a contractor who applied chip seal. "People have long lanes for their driveways," he says. "The only option in our area was to gravel, pave or concrete the driveways. Oil and chip wasn't offered in our area." With only one contractor located an hour away, families in the Saint Marys area would hope to make that contractor's list during his one week of chip seal projects.

After his parents' driveway was unable make the company's chip seal list, Vollmer saw an opportunity to start his own business. "I bought a single axle dump truck, an oil distributor, a roller and a skid steer," he says. "Then I started chip sealing."

Finding great success with chip sealing, Vollmer decided to expand his company's services to offer paving. That winter, he purchased a Mauldin 550E paver and prepared for the upcoming paving season.

Vollmer serves both residential and commercial customers completing 50 percent tar and chip work and 50 percent paving work. Vollmer Tar & Chip has a service area of an hour and a half travel time from Saint Marys.

Although Vollmer began the company offering only tar and chip services, he has seen a continued growth in paving. "As we started doing jobs and getting out there more people started to realize we could do it," Vollmer says. "We would go in and do the whole job. If a parking lot or driveway was too soft underneath, we would take out the old asphalt, install a base stone, top coat it with limestone and then place the asphalt. Those steps are something a lot of other paving contractors in this area wouldn't do."

In a community where work is completed within the hours of 9 a.m. through 5 p.m. Vollmer Tar & Chip took additional steps to ensure the project was completed without any issues. "We paved three quarters of the parking lot on Saturday," Vollmer says. "I'm not sure many other companies would have done that."

On the following Monday, visitors were able to park on the newly paved section of the parking lot. To avoid more traffic issues, Vollmer Tar & Chip finished the project under other nontraditional ways in the small community—paving at night.

"We were lucky the asphalt plant was open that night," Vollmer says. "They were doing some night paving where I bought my material, and we finished that portion of the parking lot."

Paving at night posed several challenges for Vollmer and his three-person crew; however, with additional planning the crews were able to complete the work without any problems.

One area of additional planning involved the trucks. "Having the material there was the biggest concern because our plant is an hour away. To go and get a load at the plant is usually a 2.5 hour trip from the jobsite," Vollmer says. "I hired six tri-axles to haul for Saturday’s portion and 1 tri-axle for the over-night portion plus our single axle and tandem hauled."

Every truck was essential in ensuring the proper amount of material was onsite so that the crew was able to keep up with the joints.

Crews completed the paving work with a smaller paver requiring additional effort from the crews. "We have a good paver, but it's more of a driveway paver," Vollmer says. "To do the parking lot size we did, keep up with everything the way we did, and have great finish on it was something. We have a lot of smaller equipment, but our crew is young and ambitious. We can work hard to get through some of our smaller equipment until we can purchase bigger equipment."

The night work also required additional lighting, and the crew was able to make proper adjustments to working at night. "I didn't know how the roller operator was going to see if he had any lines, and I didn't know how the joints were going to match up," Vollmer says. "You always have issues with shadows when using lights. At one point we used the lights of my service truck and pickup truck to make sure we had enough lighting. I put some faith in my crew that they would use their head."

With the nearest asphalt plant an hour and a half away, Vollmer has had to make several adjustments when completing paving projects. "We've taken different steps to keep material hot on all of my trucks," Vollmer says. "Every year I weld on the bed or whatever is needed to make the trucks as efficient to haul asphalt. All of our tarps are new at the beginning of the season and they have extra bungee cords. When we have to drive this far we have to prepare for any circumstance to keep the material hot."

Other adjustments have also had to be made depending upon the type of mix produced that day. "The only other type of material we've dealt with besides hot mix asphalt is 76 oil," Vollmer says. "You have to work with it faster because it gets harder than normal HMA. We've noticed you have to get the material right where it needs to go immediately."

Looking toward the future

Although Vollmer Tar & Chip has been in business only for a few years, Vollmer has hopes to continue growing his company and opening an asphalt plant in Saint Marys. "Our list for the year fills up a lot quicker," he says. "Last year by July, I had to have customers wait until we were available next season."

Because Vollmer works every job to ensure quality work is completed, he is skeptical of adding additional crews to complete the work he is forced push until next working season. While he is out completing jobs, his wife Angie is back in the office managing paperwork, schedules and keeping the company running smoothly.

Vollmer is grateful for his wife's organization. "Her ability to keep me organized helps keep us moving forward," Vollmer says.

One key lead generator for Vollmer Tar & Chip is Facebook. "Facebook is a better way for the younger generation," Vollmer says. "A lot of people I went to school with have jobs in factories and manufacturing plants, and our Facebook page helps us show off jobs we have completed for people who want to see what our work looks like."

As a young company, Vollmer is thankful for the fortune they have received since opening the business especially because it opened during the struggling economy. "We've been lucky enough to get some good business," he says. "We've got to work hard to get it because if we didn't want it, we wouldn't get it."