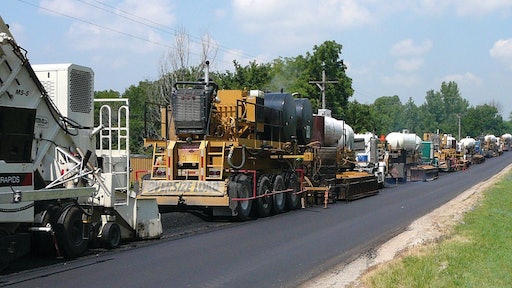 Dustrol, based in Towanda, KS, near Wichita, was founded in 1973 by Ted Dankert when he began selling emulsions for sealing asphalt and controlling dust. In 1975, the company began using rented equipment to recycle asphalt and complement its pavement maintenance operations.

These days, the company is focusing on customized Hot In-place Recycling (HIR) preservation trains to grow both its markets and its profits. Brian Hansen, vice president, with Dustrol, says there are several different types of HIR methods, but Dustrol uses its specialized MARS (Mobile Asphalt Recycling System) process that it customizes for each job. The company has done several projects in the above-mentioned states using the MARS method.

HIR is an efficient process used to repair and rehabilitate deteriorated bituminous streets and highways on –site with specialized equipment. HIR allows available dollars to be spread over more square yards of pavement maintenance areas, which is attractive to road agencies. Increased costs of maintenance work make this process a desirable alternative in a roadway repair program. Dustrol's MARS system is designed for rejuvenating asphalt up to 2 inches or more.

The MARS system provides a low-cost maintenance strategy for removing cracks, ruts and low areas by using existing asphalt pavement for in-place rehabilitation. Flexibility and quality are restored to the asphalt material and the pavement is prepared for other surface treatments.

The MARS process is performed using multiple-lift milling heads. The multiple-lift operation allows for the rejuvenation to go to 2 inches or more in depth, without degrading the existing asphalt and aggregates.

"The process allows surfacing to be placed the same day or weeks later," says Hansen. "A recycled road or street can be completed and opened to traffic with only a few hours delay. Although the train is highly visible to the public, the process is fast and presents only a minor inconvenience to motorists."

Dustrol designs and builds all MARS equipment itself. "Most companies in the HIR market build their own equipment," says Hansen. "There is some equipment available from suppliers, but we wanted to target open highway type work. Our trains can be over 1,000 feet long … we're not going after the small city street market or cul de sac market with our trains."

Because each job is different, Dustrol is able to customize its MARS train to fit the specific application. "Each state can require a different number of times the material has to be milled," explains Hansen. "For example, some might require that you can't take more than a 1-inch layer at a time. Other states might say you can't take more than 1/2 inch. If you're going 2 inches deep, you would have mill and level the road four times. This would require us to add more equipment to the train.

"Some states require us to add aggregate – rock or sand – or 10% virgin hot mix, and mix and blend it with the material we're milling," he continues. "This adds yet another piece of equipment to the train.

"The basic components are always the same," says Hansen. "We just add or subtract equipment."

The finished surface can be opened to traffic after a cool-off period similar to an asphalt paving operation, says Hansen.

The type of mix designed for the project depends on the climate, traffic, environment and what type of material is already on the road, says Hansen.

"If there is a good, quality material on the road already, then that material can be recycled and made into good material again," he says. "If the road has some rutting because the initial mix was too fine, then we can add a coarse aggregate to stabilize the road.

"We do mix designs on every single project based on the situation," says Hansen. "The mix itself can be modified by the addition of new hot mix or aggregates."

HIR gaining in popularity through education

Hansen says he is seeing a slight uptick in agencies using HIR as a viable preservation method, but the process is slow.

"There's a lot of educating going on," he explains. "We work in multiple states, and it's a long process to educate the engineers on what we're doing and to get them to try a project. Usually it's a multi-year process. They don't just come out and look at a project once and decide they're going to bid a dozen projects.

"We like to show them what we're doing," he continues. "When we show them, it helps them to see they're going to get a good, quality material on the road and we can save them some money. Many engineers are leery about spending money on a new, unknown process.

"So it takes time and effort to convince these engineers that we have a good, quality product," Hansen says. "We spend a lot of time and money marketing to different state agencies to get them to take a look at what we're doing."

Hansen says the quality work the MARS process creates is the primary reason agencies usually decide to try the process. He also notes the high cost of liquid asphalt makes it more economic for agencies to look at options other than just placing hot mix.

"The combination of being able to do quality work along with the continued high price of asphalt is making more agencies take a look at the MARS option," says Hansen.

The benefits of the MARS process

Using HIR, the old surface is replaced with a new surface reusing existing materials. The HIR surface itself can be recycled as well.