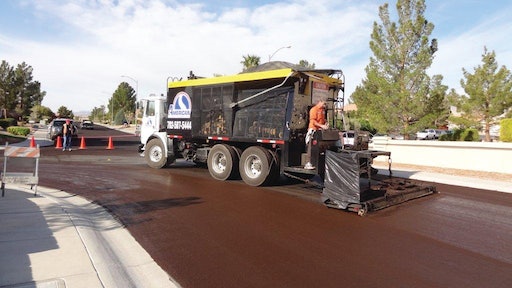 The City of Las Vegas operates on a pavement preservation plan slurry sealing both business and residential streets every 5-7 years. This project was completed in two phases by American Pavement Preservation's 14-person crew.

Currently, the City of Las Vegas operates on a pavement preservation plan slurry sealing both business and residential streets every 5-7 years, depending upon the street condition. In the most recent preservation project, American Pavement Preservation found itself applying 3.8 million square yards of slurry seal to complete the $3.6 million project.

The project was completed in two phases with Phase 1 running from April 2 through July 3 and Phase 2 running from September 2 through October 26. The American Pavement Preservation crew consisted of 14 people and operated on a 12-hour shift for five days a week.

Before Reimschiissel and his crew could complete the slurry seal application a few other maintenance steps needed to be completed including cracksealing, patching and removal of oil spots. "Another contractor crack seals the city streets a year before we come in and apply slurry seal," Reimschiissel says. "They also complete any asphalt patching a year before."

While cracksealing and patching are completed the year before, Reimschiissel and his crew must complete the time-consuming removal all of the oil spots that are present on the surface. "The oil spots have to be cleaned, and we prepare those by grinding them," he says. "We use a small, fine Roto-Mill grinder that is 2 feet wide. We grind the oil spots off and gouge the surface so the slurry sticks better to it.  We used a small Cat skid steer with the grinder attached."

It doesn't stop there. The material that is produced from the grinding of the asphalt must be disposed of through the landfill. "We use a Tymco 600 vacuum sweeper to sweep up the ground material," Reimschiissel says. "The Tymco 600 has a head on it that sucks all of the material up without scratching the surface. We take the material to a stock pile site we rent for this job as well as several other jobs. We load the material into a dump truck and haul it to a landfill. We will pick up between 6-8 tons of material per day."

Another crucial step in preparation for the application of slurry seal is the removal of traffic markings. When the pavement markings age, they start to get worn and the slurry seal won't stick to the pavement. "The same grinder used for the oil spots is used to grind off the traffic markings," Reimschiissel says. "We use marking tape for the road rather than paint, and when those types of materials get old we have to grind it off and haul it away."

After the prep work of removing the oil spots was completed, American Pavement Preservation crews were able to begin applying the slurry seal. Because the crew was working with both old and new pavement conditions, two different types of slurry were applied.

Managing the challenges of traffic

While the application process went smoothly, Reimschiissel did experience a few challenges with managing the residential traffic. Completing its own traffic control, American Pavement Preservation had to take several additional steps to inform the residents about the scheduled work.

"We have to turn in around 30-40 traffic plans for various locations and applications into the city," Reimschiissel says. "The City of Las Vegas is concerned about its residents, and they want to take care of them. So, we have to put out two notices to the residents—one seven days ahead of time and one a day before. The first notice says when we will be coming and slurry sealing their street, and it tells them to be prepared their street will be closed. We always include a cell phone number on the bottom of the street so residents can easily reach us with questions."

Reimschiissel's second notice is sent out 24-hours before they begin working. This notice describes the slurry seal stating it will be wet when applied and that it takes a few hours to dry. It also directs residents to not drive on the street until the barricades are moved. At 24-hours before the slurry seal date, the crew hangs no parking signs on the street scheduled for work. "The no parking signs remind residents they can't park in that area the following day because work is going to happen tomorrow," Reimschiissel says. "It also helps direct them to park on other streets that do not have the no parking signs."

Since the majority of the work is residential, the American Pavement Preservation crew completed the slurry seal work during the week. However, the project included a few areas with businesses and schools requiring the crew to complete the slurry seal project on the weekends.

Working on such a large project in both residential and business areas requires the teamwork of a great crew to make the project successful. "You've got to be able to produce and make sure the work is good," Reimschiissel says. "We've got a good crew, and that's one of the reasons why this project goes as well as it does."