How to Sweep a Porous Asphalt Pavement Construction Site 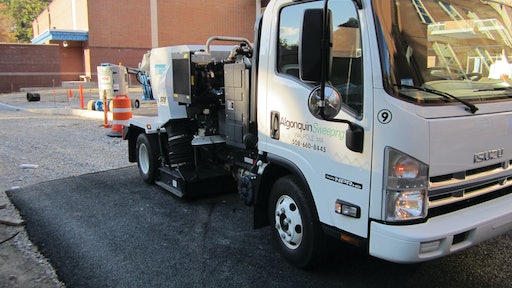 Algonquin Sweeping & Striping of Walpole,MA, completed construction site sweeping of porous pavement at Wellesley High School. Operators ran the Tymco 210 unit at a fairly low RPM increasing it to about 2200 RPM with each pass.

As the Leadership in Energy and Environmental Design (LEED) program continues to gain momentum in the construction industry sweeping contractors may begin to see an increase in the use of porous asphalt pavement. Whether receiving requests to sweep construction sites or existing pavement, sweeping contractors must be aware of the different qualities of this pavement to properly complete the work.

Ronald Lichtenstein, owner of Algonquin Sweeping & Striping located in Walpole, MA, completed construction site sweeping of porous pavement at the Wellesley High School construction site. "A $100 million high school was built next to the existing facility on the same lot," he says. "They relocated playing fields and parking lots because they had a footprint to make everything fit on. It was interesting because normally they do the building than the parking lots, roadways. Instead, they laid the porous pavement in sections."

Lichtenstein has been in the sweeping industry for 26 years offering services including striping, broom sweeping, air sweeping and commercial work. "It's fun to do new things, learning and watching the changes in the industry," he says. "Anyone that gets a porous pavement call—don't hesitate—explore it because it isn't any different than your other work, you just need the right equipment. It seems like porous pavement could become an additional area for us."

Using a Tymco 210, Algonquin Sweeping came into the project in early fall sweeping for four hours, once a week, for 12 weeks until just before Christmas. "Normally we wouldn't work that late, but the weather was quite warm," Lichtenstein says. "We came in after the shell was completed of the new building and before the demolition of the old building. The new high school was built about 17 feet off of the old one."

Why sweep during construction?

With a focus on the environment and taking care of both the inside as well as the outside of the structure, the architect had several concerns for the preservation of the new porous pavement. "Their fear was the pavement would get mucked up before the building was turned over," Lichtenstein says. "The architect wanted to make sure the pervious pavement would do what it was designed to do. Toward the end of construction they had a lot of landscaping and mulch work, especially fine materials that could clog the pavement."

The project was built in sections which resulted in a few challenges for Algonquin Sweeping. "We only had to sweep the ring-road around the high school," Lichtenstein says. "Since it was built in sections we had to accommodate what the construction crews were doing. Because of the nature of the roadway we were unable to turn of the brooms and drive over the surface in most standard situations. To maneuver through that challenge we had a beginning space, a middle space and an end."

The sections of work area also posed a challenge because there were so many people working on such a small construction site resulting in several site constraints.

Another challenge Algonquin Sweeping faced was traffic management. "It was challenging to get people in the building to move their vehicles to one side of the road," Lichtenstein says.

The construction company had a broom sweeper onsite, but for this particular portion an air sweeper was required. "The broom sweepers, aside from not being able to get into the porous material to extract dirt, they historically use more water which would have flooded the porous areas making it impossible to extract dirt," Lichtenstein says. "We spent four hours making multiple passes. We started out using the machine at a fairly low RPM increasing it to about 2200 RPM. We did that on each section we swept. We used a newer Tymco with a Tier IV engine that had a higher hp. It produces more air movement than some of the smaller machines."

With a 1.5 yard hopper capacity, Algonquin Sweeping was filling the hopper with fine materials such as dust and soil that had a talcum powder consistency, which was ground into the surface. To help manage the dust, Algonquin Sweepers utilized roughly 45 gallons of water applied as a mist.

Working with the general contractor is essential during porous pavement construction sweeping projects, and such projects often require a detailed plan. "We developed a plan and decided on a schedule for it," Lichtenstein says. "I suggest that contractors sit down with the project manager to go over the specifications and determine why the work needs to be done. In our case, we were sweeping new pavement, and our purpose was to keep the pavement clean."

For this project, Algonquin Sweeping found efficiency with sweeping the pavement in cross sections. "Sweeping off the top area at a lower RPM and increasing it with each additional pass will help extract material from the lower depths," Lichtenstein says.

He also encourages contractors to use newer equipment that has had the proper maintenance applied. "Don't think you can go in with a machine that is 10 years old and has never had maintenance work. It won't cut it for this type of sweeping," he says.

While completing unfamiliar work can be daunting to contractors, Lichtenstein encourages them to be open to expanding their credentials. "These are different types of opportunities, and they are a good opportunity to get familiar with and utilize your equipment more," Lichtenstein says. "Don't be afraid of it."

The Value of Power Sweeping