Myriad preservation methods, including slurry, micro surfacing, chip sealing and more, will be researched during the three-year study 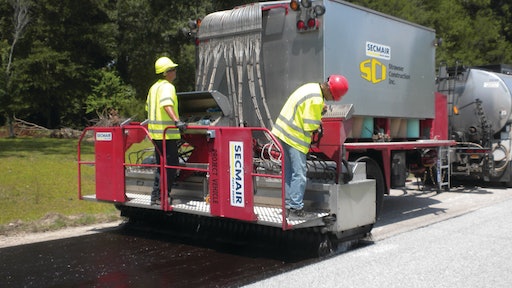 The National Center for Asphalt Technology’s (NCAT) Pavement Preservation Effectiveness Study is the fifth cycle of the Pavement Test Track. Performance monitoring of pavement preservation treatments in this cycle of the Pavement Test Track and on 2,500 feet of Lee Road 159 in Alabama will allow researchers to determine the service life extension of various pavement preservation techniques relative to pretreatment condition and explore ways to stretch transportation budgets.

Seven state departments of transportation and multiple private sponsors have stepped forward to support the expansion of the scope of this research project to include proactive maintenance methods. These methods include slurry and micro surfacing, chip sealing and crack treatment, among others and will be used alone or in combination to test several methods in varying circumstances.

The International Slurry Surfacing Association (ISSA) is not only donating funding to this project, but the members that drive the association are donating their time, knowledge, expertise and even equipment to help facilitate proper pretreatment to post-treatment condition comparisons.

“This three-year study should be great for the pavement preservation industry,” says Doug Ford, 2012 ISSA President. “It will provide quantified results for each process and insight into the timing and processes that best address each level of deterioration.”

Since it’s creation in 1986, NCAT has sought to be a world leader in hot mix asphalt research, development, technology and education. The fourth cycle of the Pavement Test Track began in August 2009 and was completed 25 months later in September 2011. By design, this cycle took
17 of the over 40 200-foot sections of roadway involved in this project and either reconstructed or rehabilitated each of those sections.

Now in the fifth cycle, NCAT has already applied a rejuvenating fog seal to two sections and a triple chip seal, which will be evaluated as an interlayer, to one section of the most recently reconstructed or rehabilitated sections of roadway.

Lee Road 159 will be divided into 25 100-foot sections that will receive other pavement preservation treatments including various methods of micro surfacing, chip sealing, crack treatment, fog sealing, scrub sealing and fiber mat. The Pavement Test Track and Lee Road 159 will be evaluated on a regular basis over the course of this 3-year study and progress reports will be published periodically.