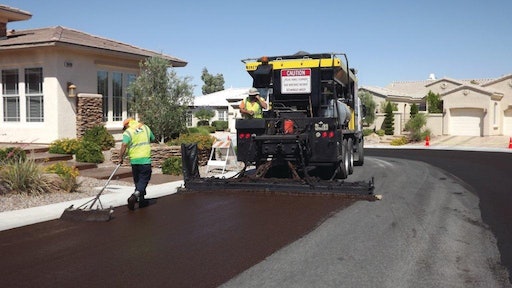 Slurry seal is one of several pavement preservation techniques contractors can offer clients to lengthen the life of their pavement. Eric Reimschiissel, president and manager of American Pavement Preservation located in Las Vegas, is no stranger to slurry seal and its benefits. In a recent project, his experienced crew helped execute a flawless finish for the slurry seal of the Siena community streets.

Siena is a 667 acre age-privileged community located in Las Vegas. Built about 14 years ago, Siena has regularly maintained its pavement with slurry seal. "They're a very proactive community as far as taking care of the property," Reimschiissel says. "About six years ago they started working with an engineer to maintain their streets. The engineer inspected the streets and made a recommendation to continue crack sealing and slurry sealing the streets."

When working with homeowner associations, contractors can encounter several challenges scheduling to traffic management. In a community filled with lots of activity, Reimschiissel corresponded with the Siena Community to organize the schedule. Reimschiissel had to coordinate with the schedules of waste management, landscaping, pool maintenance, etc.

“It took a few rounds of sending schedules back and forth to get everything organized,” he says. “There was definitely cooperation between everyone to make sure we had the right schedule because we had to close streets—which is typical of slurry seal. We also made sure to have shorter sections allowing people to go in and out of the area.”

Managing traffic was one challenge faced by the crew, and to ease the stress on both residents and the crew, American Pavement Preservation passed out three sets of notices. "The notices we handed out helped everyone understand what work was being completed and where," Reimschiissel says. "The notices had a colored map on the back referencing what work was being completed each day."

Another step taken to manage traffic was posting "no parking" signs labeled with each date of work informing residents what streets would be completed when.

While signs and letters are useful tools to inform residents, incidents can still occur where people forget about the scope of work being completed. "We also put cones in every driveway—something other contractors don't do," Reimschiissel says. "The cones are placed to block of the driveways in order to make sure the residents know not to back out on the street. So, if someone forgets about the slurry seal they will back into a cone before hitting the material."

The prep work for this slurry seal project required the completion of an additional maintenance service. "We crack sealed a few weeks before slurry sealing," Reimschiissel says. "They designated the amount of cracks and what cracks needed to be done where. The engineer was very specific about things."

This project wasn’t a big production job for American Pavement Preservation. They had an application rate of 14 pounds per square yard of dry aggregate. The crew completed 10-15,000 square yards a day due to the detail work of the project. “We didn’t want to complete this project in a big hurry because we wanted to make it perfect,” Reimschiissel says. “There was a lot of hand work because it is a residential community with cul-de-sacs.”

At the end of the day after applying the slurry seal, the crew would roll the surface with a rubber tire roller 5-6 passes to smooth the surface. The crew also swept the project twice to pick up any loose aggregate.

While every project requires attention to detail, this project required an additional focus to achieving success. “There was a great intensity with the guys knowing everything on this project needed to be perfect,” Reimschissel says. “We made sure there were no mishaps on scheduling, and people were more focused on making sure it went well.”