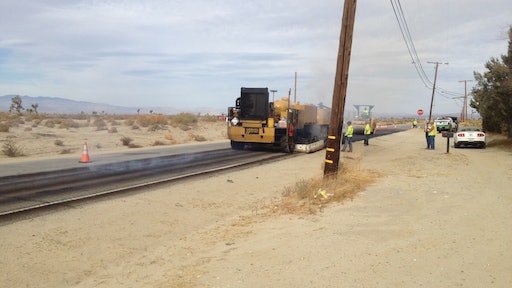 Municipalities and other agencies are taking a closer look at hot in-place recycling (HIR) thanks to a new process by Gallagher Asphalt Corp., located in Thornton, IL. This next step for HIR can recycle 100 percent of the existing pavement without having to add an overlay, and it can do this for about 30 percent less cost. The Gallagher Recycled Hot Emulsified Asphalt Treatment – or Re-HEAT – system can also reduce the carbon footprint by 63 percent compared to a traditional mill-and-fill.

Re-HEAT is comprised of three pieces of equipment: two self-propelled all-wheel-drive propane-fired pre-heaters followed by a processing unit. Coming in at just over 120 feet long, the total length of the two machines, allows the Re-HEAT system to be used in municipal settings typically not feasible with other HIR systems.

The Re-HEAT train begins with the tandem pre-heaters gradually heating the existing asphalt pavement to 300 degrees F. "This will be done in stages, as the preheaters develop a heating pattern – similar to a rolling pattern – to increase the pavement temperature from ambient," explains Patrick Faster, national sales director for the Hot In-Place Recycling Division with Gallagher Asphalt.

After the preheaters, the next step is the processing machine, which is basically "a small asphalt plant going down the road," says Faster. Paddles under the unit begin to collect the heated, softened material into a windrow, which is fed into an on-board asphalt drum mixer.

In the horizontal drum mixer, the rejuvenating oil is uniformly applied and mixed while the heating process is maintained within the drum. The recycled hot mix is then distributed out of the drum onto the pavement where it's augered and placed through a traditional asphalt paving screed. The paving screed ensures proper slope and grade is delivered to the final surface course.

Following the processing machine is a steel-drum vibratory roller that achieves specified density. Minutes later, the road is open to traffic.

In order for a process like Re-HEAT to perform correctly, the pavement must be structurally sound with no base failures or underlying drainage problems and be at least three inches thick. "We're pretty particular about the roads we select," says Faster. "We want to find the best candidate to perform work for that agency so that we're invited back for the next season."

Re-HEAT has been successfully performed throughout the country, including in Chicago, Pittsburgh and Cleveland. Several cities, including Chicago, Milwaukee and Marietta, GA, had the process incorporated into their resurfacing programs for 2012. Counties in George, Ohio, Tennessee and Indiana are also including the process into their preservation programs – as have state DOTs in Rhode Island, Illinois and Indiana.

Lancaster, CA has a population of about 100,000 and is located in the high desert of Los Angeles County. Last summer, city officials approved the use of Re-HEAT to "get the absolute best value for every construction and maintenance dollar the city spends," they said in a release.

The project consisted of using the Re-HEAT process on approximately 115,000 square yards of asphalt on six different roadways. The roads varied from two-lane, lightly-traveled roads on the outside of Lancaster, to six-lane, heavily-traveled roads in the heart of the city, including a section of roadway in front of city hall.

Lancaster was the first city in California to adopt the pavement preservation technique. The efficiency, cost-effectiveness and eco-friendly nature of the process were key selling points in the city's decision to use Re-HEAT.

"With this kind of technology, residents can leave for work in the morning before we start the road work and come home to an entirely new street by the evening," says Ray Hunt, Lancaster's capital engineering manager.

Resurfacing using the Re-HEAT process runs $9 to $11 per square yard compared to conventional resurfacing methods, which typically cost $12 to $15 per square yard. Lancaster officials believe Re-HEAT can reduce the carbon footprint of roadway projects by 65 percent. The repaved streets are also expected to last longer.
"Depending on the cost-per-ton for virgin mix in a given area, there may well be a savings of 10 to 35 percent over conventional mill and fill," says Faster.

Other benefits of Re-HEAT

John Danello, Jr., pavement recycling superintendent for Gallagher, says there were many benefits to using Re-HEAT in Lancaster. "The process uses 100-percent recycled materials and offers a 60-percent less carbon footprint than traditional processes," he explains. "We feel it's a benefit for everyone and the environment. Additionally, as a contractor, you lower your liability by not having 20 to 30 heavy dump trucks in traffic and putting unnecessary wear-and-tear on the existing roadways."

Faster agrees about truck traffic, adding, "Heavy truck traffic is virtually eliminated. Trucks to haul grindings out and mix in are just are not there. On another project we completed with Re-HEAT – a 10,000-square-yard segment of a larger project in the Chicago area – we eliminated 250 truckloads of material, had no lane closure and was completed in three days versus two and half weeks for the conventional method."

No lane closures is a huge benefit of Re-HEAT. "The Re-HEAT-processed roadways are done at the end of the day," says Faster. "There is no lane closure, rather lane restriction, for a short period."

"This is a single-pass process," adds Danello. "When we're done for the day, the roadway is open to traffic, and the public can travel on a finished product. This minimizes the amount of lane closures needed and lowers everyone's exposure to traffic incidents and delays."

One of the greatest challenges of using a process like Re-HEAT is in transporting the equipment. Shepley Motors, an equipment-hauling company based in Thornton, IL, was a great asset to Gallagher for this purpose.

"Mobilization through multiple states with an oversized load was a challenge," says Danello. "Permits had to be procured in every state, and each state was unique in its requirements and regulations. Thanks to some help from Shepley Motors, the process went smoothly."

Danello says Shepley handled all the logistics – from procurement of permits to routing and working under tight time constraints – in order to get the equipment to Lancaster.

California regulations had to also be considered during the Lancaster project. "Specialized emission systems needed to be fabricated and installed in the equipment to comply with California regulations," says Danello. "Our engineering staff worked closely with the manufacture to develop a system that complied with all regulations and fit our machinery while working under tight time constraints."

One of the steepest challenges is getting municipalities and others to even consider trying a process like Re-HEAT.

"Educating municipalities, counties and DOTs is truly missionary work," says Faster. "Attracting their attention with a cost savings is a start, coupled with quicker more efficient technology and less user delays keeps them in the game. The fact is most agencies have $100 worth of problems and $50 to fix them. They have to be looking at things like Re-HEAT.
"The best way to show an agency person is to have them roadside while the machines are performing," he adds.

As always, the correct team of people can make or break a project. During the Lancaster project, many Gallagher team members had to travel across the country. "Leaving your family to work across the country for 35 days isn't an easy task," says Danello. "We put together a core group of individuals that exceed the industry standards in many ways. They all operate under the same principals of SQP – safety, quality and production. By being safe, we keep a healthy work force, which promotes cross training and growth. Taking pride in what we do and providing a quality product, allows us to consistently set the industry standards and grow our business.

"Finally, staying focused, communicating and completing the first two tasks in order, allows our productions to continually increase without sacrificing safety or quality," he concludes.

Gallagher Asphalt has been building roads for nearly 85 years as an asphalt producer and contractor and recycling roads for over 65 years. "The Re-HEAT process is the next generation of recycling that we've been working with for the past four seasons," says Faster. It looks like they have a winner on their hands.

Crafco has industry-leading crack sealing products to help you get the most from your efforts. Rout-Clean-Seal to double sealant service life!
Nov 20th, 2020
Latest

North of Sacramento, a W 210i and W 2100 precisely milled the spillway chute of the Oroville Dam, the highest dam in the US.
Wirtgen Group
May 6th, 2020

The RX-405 has a center-mounted cutter drum with an all new variable cutter system (VCS) for easy change-out of the cutter drum
Mar 12th, 2020

Both the RX-700e/ex and RX-900e/ex milling machines can be equipped with bolt-on packages that allow them to be used for Cold-In-Place Recycling (CIR).
Mar 11th, 2020

Rear object detection on the RX-505e Cold Planer is designed to stop the mill if a person or object is detected behind the machine while it is in reverse.
Mar 11th, 2020

The RX-405 is designed to cut variable widths of 2 to 5 feet, and cuts up to 13” deep. It is perfectly balanced for smooth elevation changes while cutting.
Roadtec Inc. - Astec Industries
Mar 10th, 2020

The two in one spreader/paver can be used as chip spreader when moving forward and a paver when in reverse.
Dynapac North America LLC
Mar 9th, 2020

The company will unveil 10 new pieces of equipment with a focus on innovations surrounding the environment, safety and technology
BOMAG Americas Inc.
Jan 23rd, 2020

Neighborhood near first battle site of the Revolutionary War is first in the state to undergo plant-based, benign chemistry, asphalt rejuvenating fog seal contracted by a municipal government
Dec 2nd, 2019

The 50-page book will outline the components of a successful sustainability program, along with guidance for developing and implementing a sustainability plan, as well as for reporting on plan progress.
NAPA National Asphalt Pavement Association
Nov 7th, 2019

With the increase in the amount of recycled asphalt pavement (RAP) used in modern mix designs, good RAP management practices need to be deployed across the entire production and paving process
Jessica Lombardo
Oct 7th, 2019