E.J. Breneman uses FDR to stabilize roads in the Marcellus and Utica shale fields of Pennsylvania 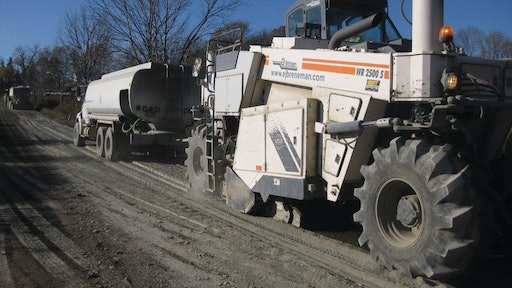 In 2008, the first natural gas energy companies started exploring the deep layers of shale hidden one and half miles below the surface of the countryside of Pennsylvania, New York, Ohio and West Virginia. There they discovered a homegrown source of energy. It brought these states a billion-dollar development which meant new jobs, new-found riches, and some of the lowest unemployment numbers in the U.S.

It also brought anxiety for the environmentalists, worries about ground water pollution and above-ground contamination, and in some communities, divided opinions and bickering from those who had hit pay dirt to those who had not.

Shale gas refers to natural gas that is trapped within shale formations. Shale is fine-grained sedimentary rock that can be rich sources of petroleum and natural gas. Over the past decade, the combination of horizontal drilling and hydraulic fracturing (fracking) has allowed access to large volumes of shale gas that were previously uneconomical to produce.

The production of natural gas from shale formations has rejuvenated the natural gas industry in the U.S. Marcellus Shale is one of the largest natural gas fields in the world. Around 2,000 to 7,000 feet below the Marcellus formation is the Utica Shale formation extending from Quebec, Canada, south to Kentucky with major concentrations in Pennsylvania, Ohio and West Virginia.

The good news is the availability of large quantities of shale gas should enable the U.S. to consume a predominantly domestic supply of gas for many years and produce more natural gas than it consumes. The bad news … roads are being destroyed.

Roadways that used to carry farm to market traffic were now required to carry hundreds of trucks with loads that contained drilling pad equipment, water and additives such as sand, and chemicals to help in the fracking processes.

Some of these roads within the Marcellus and Utica shale drilling fields can carry hundreds of loads of water per day. In the very early days of natural gas drilling in the Marcellus and Utica Shale formations, the last consideration was the state and local roadways.
State and local roadways became impassable even with a four-wheel drive vehicle. In some of the more rural Pennsylvania counties, many of the roads are still made of dirt and gravel. It took little time to destroy these roads. Even the improved roadways that had many applications of oil and chip and hot mix asphalt became victims of the increased traffic and axle loadings.

In the beginning, large quantities of aggregate where merely laid and spread on the surface of the roads. As these aggregates migrated to the shoulders of the road, clogging drainage ditches and rutting deeper, more aggregate was added. With each application, the height of the roadway increased. Soon property owners were faced with driveways too steep and unstable to reach the road.

If the design life of a county road is approximately 30 years, the impact of every 1,000 extra trucks on that county road would decrease the roadways lifespan by 13% (taking into account that a county road would average 1,000 vehicles a day). In most areas with shale gas drilling, the truck count is increased dramatically when the fracking operation starts, which means hundreds of trucks carrying water venture onto improved and unimproved roadways.

The idea of using aggregate to cover over or keep the roadway in some kind of reasonable shape gave way to traditional hot mix asphalt applications. With unstable subbase problems, however, it was apparent that not just the surface course but the subbase its self was in need of stabilization.

The effects on an unimproved roadway are instantaneous with movement of the road materials and sub soils. Some improved roads may take a day to start showing signs of fatigue and then failure. Nearly all local and state governments understand that this degradation of their highway system will take place when drilling and fracking operations are close at hand. This type of road damage will lead to extraordinary monetary cost.

In Pennsylvania, tens of thousands of dollars have been spent on weight limit signs alone. During the fracking operation, it takes around 890 to 1,350 truckloads of water and additives. The well requires around 5.6 million gallons of water during the fracking process of one well head, which is equivalent to 3.5 million car trips.

The energy companies take full responsibility for the failed roadways and placed these roads out for public bid. In response to this issue, the energy companies looked for alternative solutions to help rebuild the failing infrastructure and calm the anger of local officials and the general public. In nearly all cases, full depth reclamation (FDR) was recommended for the roads that have carried these extra trucks and their loads.

FDR to the rescue

E. J. Breneman, L.P. was one of the first contractors to use FDR in the Marcellus and Utica shale fields in Northern and Western Pennsylvania. The company has been associated with FDR for many years. This process uses the full flexible pavement section and a predetermined portion of the underlying materials. The materials are uniformly crushed, pulverized and blended with additives, resulting in a stabilized base course. The FDR process allows a deteriorating roadway to be returned to a stable state in a very short period of time.

This process rebuilds worn asphalt pavements and soft subbase materials by recycling the existing roadway materials. The old asphalt, chip seal and, subbase materials are pulverized and mixed with Portland cement and water.

The use of the FDR process in the shale gas field operations has come about not only because it is a major fix to a very serious problem but, that also because virgin aggregate was depleted in some areas due to the past practices to construct these roadways.

Asphalt plants had also been subjected to shortages in aggregate for new hot mix asphalt. Conserving aggregate materials through the recycling processes makes smart economic and strategic sense. Some of the best quality aggregates where mined first and are already in place in our road system.

So far, nearly 600 lane miles have been constructed using FDR Portland cement in the Marcellus and Utica shale fields; Breneman has completed around 400 of those lane miles. Work on the roads started in 2010 and is still ongoing but at a much slower pace.

To fix the deteriorating roads from the shale gas operations, Breneman uses a self-propelled, traveling rotary reclaimer capable of cutting up to 16 inches in depth. The equipment is able to pulverize the existing pavement, base and subgrade at a minimum width of 8 feet.

The machine is equipped with a computerized integral liquid proportioning system capable of regulating and monitoring the water application rate relative to the depth of cut, width of cut, and forward speed.

The pavement is first pulverized and broken down to meet specifications. Then additives are placed according to the mix design. The additives are accurately and uniformly spread on the pulverized pavement by using an adjustable rate auger/vane type dry additive distributor.

Portland cement and other additives to the mix design are then spread over the pulverized roadway materials. Once the cement additive is applied, the additive and pulverized pavements are mixed together using the reclaimer in a second pulverization and mixing operation. This is done at the design-specified treatment depth while simultaneously injecting additional water needed through the machine computerized integral liquid proportioning system to create a homogenous mixture.

The curing process for chemical stabilized base is between three to five days after final compaction has been completed. The surface is protected from drying too fast. A bituminous prime coat is applied to the entire surface to slow the curing or drying of the cement stabilized base and to stop dust from the drying operation from getting airborne.

Best choice for the roads

FDR is a great choice for these deteriorated roads because there is no stability in the roadway. Stabilizing the old road and soils can be accomplished without moving the materials, a benefit when the logistics and cost of moving the materials would place an unworkable financial and environmental burden on the project.

Stabilization will increase the shear strength of the soils and road materials and control the shrink-swell properties of these materials, thus improving the load-bearing capacity of the subbase to support pavement and foundations.

When roadways are stabilized and treated with the right additives, storm water run-off will not cause erosion, which in turn would have sent thousands of tons of silt into rivers and bays. This erosion clogs and silts vital waterways, silting over fish habitats that would have been spawning grounds for future generations.

The FDR process helps to preserve soils, waterways and roadways. The same materials used to build the original highway system can be reused to repair, reconstruct and maintain them. Where appropriate, reclamation of soils, aggregates and, asphalt materials makes sound economic, environmental and engineering sense.

The modern way to construct using FDR has been around since the late 1980s, early 1990s. The process itself is the fastest expanding construction method used today. The roads constructed in the Marcellus and Utica Energy fields will continue to perform beyond a predicted lifetime of 20 years. The wearing courses will oxidize and breakdown before that period of time, however, the cement base will provide strength and support for the new hot mix asphalt applications of the future.