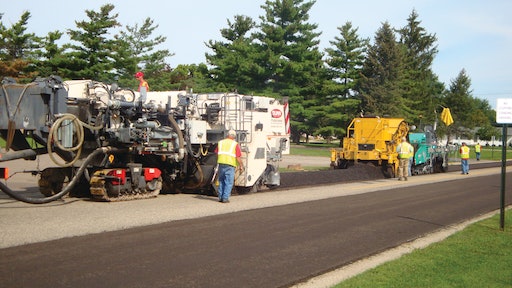 With a population of just over 13,000, the city of Streator is located in LaSalle and partially in Livingston counties in Illinois. The city is situated on the Vermilion River approximately 81 miles southwest of Chicago in north-central Illinois.

Streator had several streets that needed repair. Jeremy Palm, P.E., city engineer with the city of Streator assessed the existing pavement condition and determined if a pavement surface rehabilitation project would be sufficient to upgrade the street or if more drastic measures like patching or full removal would be required due to base failure.

“In evaluating the pavement, only surface cracking and deterioration were witnessed, so the conclusion was made that the underlying base was not in need of repair and therefore a pavement surface rehabilitation project would be the way to go,” says Palm. “The next step was to evaluate the types of pavement surface rehabilitation or replacement that could be undertaken. I looked at traditional milling and resurfacing and cold in-place recycling (CIR).

“As both methods were capable of providing the desired effect of creating a pavement surface with a design life of 20 years the biggest factor in the decision was cost,” continues Palm.

For this project, Palm illustrated the costs associated:

“As you can see, the 3” CIR and ½” seal project created a cost savings of roughly 30% over the traditional mill and overlay method,” says Palm. “This is what led to my selecting CIR as the preferred alternative in this case.”

Streator had used CIR to rehabilitate other streets in the city. The performance data from the first project, which was installed in the summer of 2011, had been through two freeze-thaw cycles and showed only very minimal cracking in isolated areas of the project. This first project was also a truck route and no rutting had been witnessed in the last two years.

Some minor indentations from the wheels of parked cars were found along the project within the first month of the project being opened to traffic but no new indentations had been witnessed after the CIR and sand seal had a chance to fully come to strength, says Palm.

“These indentations were minor and were only witnessed in the first few hours after a rain event,” he explains. “They were not enough of an issue for me not to utilize the CIR process again.”

CIR in an urban setting

With the decision to use CIR made, Dunn Co. was hired as subcontractor on the project. Headquartered in Decatur, IL, Dunn Co. is a full service asphalt paving and in-place recycling contractor.

Jim Schwarz, vice president of Dunn Co., says the company has a lot of experience doing CIR, but that it’s unusual to see a small town chose CIR. “It’s just harder to do CIR in an urban setting,” he explains. “With the equipment we used in the past – the old recycling trains – it just wouldn’t be possible to do it.”

Streator had seven streets that would need rehabbing with CIR. The longest street was six blocks; the shortest were one block each.

“Logistically, it was tough on this project – there was a fair amount of moving the train,” says Schwarz. “Our new unit is smaller and more compact; it’s much more nimble, so it was easier to move from area to area.”

Schwarz is referring to Dunn Co.’s new single-unit recycling train, a Wirtgen 3800 CR. The 3800 CR offers the ability to cold-in-place recycle a full lane of pavement in one pass, stabilizing with foamed asphalt "green mix" or any other stabilizing medium. With a conveyor mounted, it will also serve as a full-lane cold mill.

The unit uses a full-lane, 12-ft.-6-in.-wide drum and a screed width to match. In recycle mode, it can achieve a recycling depth of up to 6 inches. In cold milling mode, it will mill to 13.75 inches deep in the upcut mode, or can operate in upcut or downcut mode after alteration. An integral gradation beam positioned in front of the cutter is held under hydraulic pressure on the pavement surface to avoid "chunking" of asphalt into recycled mix.

Besides fitting into a tight urban area, Schwarz says another challenge on the project was the brick street found under the asphalt. Workers had to hand pick through the mix to remove the bricks which had been the original roadway over a century ago. “It was pretty labor intensive,” he says.

The original brick base had caused a lot of the reflective cracking that was coming through to the modern-day paved asphalt. Using the 3800 CR machine, Dunn was able to recycle the mix in place without using a conveyor to transport the material to the paver.

“In this case, having the windrow pickup made the CIR train even more compact than using a conveyor,” says Schwarz. “In an urban setting like this, it works better to not have a conveyor.”

The machine removed 3 inches of asphalt and placed the recycle on the ground in a windrow. A paver came behind the recycling machine, picked up the windrow and created the new asphalt mat. The city finished the project with a ½-inch HMA sand seal surface course, which was paved by Streator Asphalt.

“We were able to give them a good mat and a smooth enough surface with CIR that the city could overlay with ½-inch surface course,” explains Schwarz. “That in itself was a challenge to get it smooth enough for a thin overlay.”

Having to complete seven small sections in the heart of town was one of the great challenges for Dunn on the Streator project.

“We went through some commercial areas and some residential areas, and we had to keep the traffic flowing, keep roads open to emergency vehicles and get people back in their driveways that evening,” says Schwarz. “We had to complete this project with the least amount of disruption to the community as possible.”

Using the CIR process and a specially engineered emulsion, Dunn was able to get drivers back on the roads in a couple of hours compared to days with a mill-and-fill type project. Fortunately, there were not a lot of utilities in the streets, and the city took care of lowering and raising them, which was one less worry for Dunn Co.

“We were able to completely recycle the pavement on the streets and have the roads open to traffic within a couple of hours of completion,” says Schwarz. “The city didn’t have to block streets off for days.”

Schwarz knows that it’s more than the recycling machine that brings success to projects like the one in Streator. “It takes conscientious work from the people on the paver to put the asphalt back correctly, and the people on the rollers to roll it smooth enough to meet tough standards,” he says. “It’s not only good equipment, it’s also good people. It’s knowing the challenges ahead of time and making smart decisions. Experience also helps – all of these things are part of a successful project.”