Muscogee Nation Gets Into the Milling Game 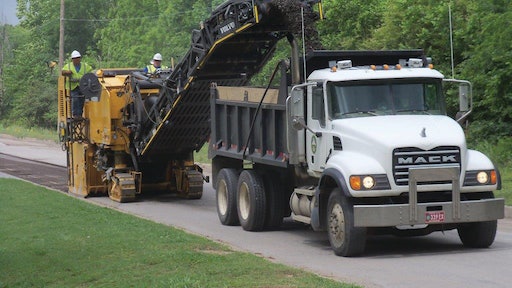 It's not every day that you hear about a government agency talking about profit margin. Budgets, yes. Contracts, sure. But figuring out how to put a pile of money back in the bank thanks to a new piece of construction equipment? No. That's pretty rare.

“In my mind were the dollar signs. I knew what we could make with it if we could put it to work,” says Charley LaSarge, who manages the transportation division for the Muscogee (Creek) Nation and who first took the idea for the purchase of the Volvo milling machine to the tribal council. “I guess it's the manager's way of thinking. We're thinking in all different directions. We needed supplemental money. That's one way to get that for the tribe.”

The Muscogee tribe covers a huge swath of ground in eastern Oklahoma, extending into 11 counties south of Tulsa. LaSarge oversees a multi-faceted department within the tribe. He's the guy who makes sure the transit buses are running on schedule to help tribal residents get around. He's also the guy who makes sure the tribe's chartered bus program is running smoothly. And he's responsible for making sure hundreds of miles of federal roads that run through the tribe's territory are in tip-top shape.

It's not an easy job. When LaSarge showed up several years ago, he knew he had a tall task in front of him – “They didn't have much equipment when I came here, and it was in pathetic shape,” he says.

Since then, he's scraped together funds to buy a new dozer, dump truck, and front loader, along with several other new pieces of machinery. But there's always the need for more. And there's not always the money for it.

What LaSarge noticed was that milling machines aren't that easy to come by in rural Oklahoma. It's tough to find a contractor who has one when you need one. It makes them valuable, and there are plenty of times when you need a milling machine. Often, a county won't have the funds immediately for a complete reconstruction of a road. But a good stopgap is milling up a road and re-laying it with the old asphalt until funds for an overhaul are available.

To LaSarge, a milling machine made perfect sense for the tribe, which frequently does road work for surrounding counties. And so he convinced the tribe's national council to make a special equipment purchase with the acquisition of a Volvo MT2000.

The tribe's first job was a small one -- just less than a mile of county roadway. He went conservative; charging just $500 an hour for the milling machine, plus labor, figuring it would be a solid two-day job. Of course, the work went faster than that with the tribe's new milling machine, which is equipped with an 86-inch drum and a high-production conveyor, capable of moving more than 35,000 cubic feet of material per hour. The unit also has three distinct cutting speeds to fit any possible job.

“It's hard for four or five dump trucks to stay up with it,” LaSarge said. “It's a hoss.”

In the end, the tribe was off the jobsite in just over a day, but still with a hefty $9,500 in its pocket. That money was funneled back into its equipment fund. Now, if the tribe needs a new dump truck or backhoe, there's a growing source of money to use.

Features make all the difference

Part of the appeal of the MT2000 is its advanced diagnostics technology. Multiple screens give operators details about the machine's performance, with messages displayed in common language instead of confusing codes. The One Touch system makes for easy maneuvering; allowing operators to shut down the conveyors and adjust the grade controls to move over manhole covers and other obstacles. The stability control system monitors the cross slope of the milling machine, automatically adjusting the support legs on uneven ground. Plus, the walk-in service compartment allows easy access to the engine, hydraulics, and coolers.

John Brown, an equipment operator on LaSarge's crew, gave the MT2000 high marks recently as he guided the milling machine down a stretch of worn out county road. He and the other operators were working safely in a protected environment, with all of the controls to the key components of the milling machine – the engine, hydraulics, fan, and coolers – within easy reach. The dual control panels with LCD display showed the real-time track positioning of the MT 2000.

LaSarge and the tribe struck their deal on the MT2000 after visiting the World of Asphalt convention with Laine Rieger, a salesman with G.W. Van Keppel Company in Tulsa. The tribe has found a good match with Volvo and Van Keppel. A Volvo representative provided jobsite training, and tribal staff attended Road Institute courses at the Volvo training facilities in Pennsylvania for intense, hands-on instruction of set-up, operation and servicing procedures for the Volvo milling machine.

Nearly 10 miles of dirt road connecting Kenwood to the Twin Oaks area was paved to provide safer travel for tribal and non-tribal citizens who live in the area.

“Improving roads and maintaining bridges for citizens are an important part of what the Cherokee Nation government does. We are proud to make these investments in infrastructure upgrades because it improves the quality of life in Delaware County,” says Cherokee Nation Principal Chief Bill John Baker. “The Cherokee Nation maintains these kinds of strategic partnerships to ensure our communities remain safe for our families.”

“This new nine-and-a-half-mile stretch of paved highway will not only provide safer travel for Delaware County citizens, but also reduce the wear and tear on citizens’ vehicles,” saiys Tribal Councilor Curtis Snell. “This reduces the financial burden of maintaining their vehicles.”

The Cherokee Nation works cooperatively with counties inside the tribal boundaries to repair and replace roads and bridges. In many cases, the Cherokee Nation purchases the materials and the counties provide the work. The Bull Hollow Road project was funded under a federal program, so the Cherokee Nation managed this particular project from start to finish. This is the longest federally funded highway project the tribe has managed to date.

“I cannot say enough good things about our partnerships with the Cherokee Nation,” said Danny Duncan, Delaware County commissioner for District 3. “This new road helps not only Cherokees living in this area, but everyone in the county. It opens up a new route for commerce by better connecting these communities to Highway 412, and better connecting Delaware and Mayes counties. Bull Hollow Road was problematic for so many years, so this new road will have a tremendous impact on all of southern Delaware County.”